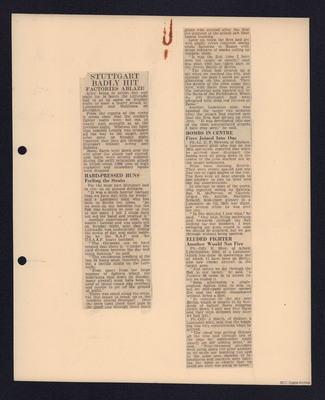 Two columns of newspaper cutting mounted on an album page

After being in action day and night for 24 hours the Luftwaffe had to go up again on Sunday night to meet a heavy attack by Lancasters and Halifaxes on Stuttgart.

From the reports of the crews it seems clear that the enemy's fighter packs were not out in nearly such strength as on the previous night. Whereas the force that bombed Leipzig was attacked all the way to the target, crew after crew on Sunday night reported that they got through to Stuttgart without seeing any fighters.

Some flares went down over the city after the attack had started, and there were several combats during the swift saturation attack in which about 2,000 tons of high explosive and incendiary bombs were dropped.

For the most part Stuttgart had to rely on its ground defences.

"It was a much heavier barrage than we have met with for weeks," said a Lancaster pilot who has been to Berlin ten times. "As we were on our bombing run the flak was bursting so near us that at one point I felt I could have put out my hand and touched it."

Another experienced pilot, who bombed Leipzig and was again out on Sunday night, said that the Luftwaffe was undoubtedly feeling the strain of day and night bombing by the R.A.F. and the U.S.A.A.F. heavy bombers.

"The Germans are so hard pressed that there is no longer any rigid division between the day and night fighters," he said.

"The continuous bombing of the last 24 hours must, therefore, have put a terrific strain on the Luftwaffe.

"Even apart from the large number of fighters which the Americans shot down on Sunday, many aircraft must have been in need of minor repair and overhaul and unable to get off the ground at night."

There was cloud along the route, but this began to break up as the bombers neared Stuttgart. Over the town itself there were gaps in the cloud and through them many

pilots who arrived after the first few minutes of the attack saw their bombs bursting.

Later on when the fires had got well alight crews reported seeing whole factories in flames with dense columns of smoke rolling up towards them.

"It was the first time I have seen the target so clearly," said one pilot who has taken part in the recent Battle of Berlin.

"The cloud had cleared up a bit when we reached the city, and through the gaps I could see snow glistening on the ground. Then the streets of the town came into view, with fierce fires burning in the industrial area marked out by the flares of the Pathfinders. When we left Stuttgart had been ploughed with deep red furrows of flame."

Another Lancaster pilot, who bombed the target two minutes after the attack had started said that the fires had sprung up even then. "It was developing into one of the most concentrated attacks I have ever seen," he said.

BOMBS IN CENTRE
Fires Joined Into One

Flt.-Lt. C.P. Newton, of Chelsea, a Lancaster pilot who was on his 30th operation reported that when he arrived over Stuttgart the bombs were all going down in the centre of the area marked out by the target indicators.

Fires were burning fiercely. They were evenly spaced and one line ran at right angles to the rest. The fires were all near enough to one another to join up later into one big concentration.

In contrast to most of the crews, who reported seeing no fighters, Sgt. H. McFerran, of Carrick-fergus, Co. Antrim, Northern Ireland, mid-upper gunner in a Lancaster on his 28th war flight, saw several while he was over the city.

"In five minutes I saw nine," he said. One kept flying backwards and forwards through the flak looking for our bombers. I kept swinging my guns round in case we should be attacked, but we got through without being spotted.

ELUDED FIGHTER
Another Would Not Fire

Plt.-Offr. H. Blow, of Alford, Lincolnshire, pilot of a Lancaster which has done 18 operations, out of which 11 have been on Berlin, also saw enemy aircraft in the target area.

"Just before we got through the flak to our target," he said, "a Junkers 88 came in to attack us, but we eluded it.

"Soon afterwards a single-engined fighter tried to stop us, but my mid-upper gunner opened fire and the enemy disappeared without firing a shot.

"In contrast to the sky over Berlin, which is usually lit by hundreds of fighter flares dropping slowly down, I only saw four flares and they were dropped only after we had left."

Plt.-Offr. J. Smith, of Sydney, a Lancaster pilot, said that the bombing was very concentrated when he arrived.

"The cloud was getting thinner all the time and through one of the gaps my bomb-aimer could clearly see our aiming point," he said. "Four-thousand pounders were going down one after another as we made our bombing run and in the same area showers of incendiaries and markers were lighting the town so clearly that we could see what was going on below."