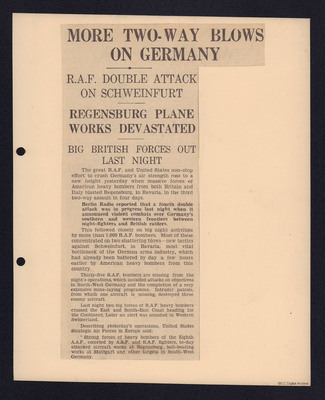 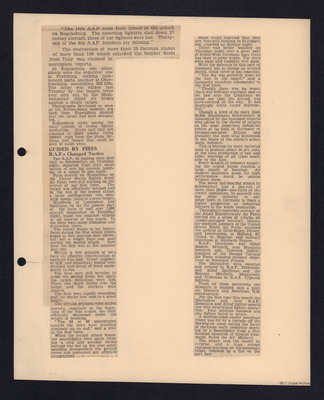 One single article covering with three separate columns. Headlines - RAF double attack on Schweinfurt, Regensburg plane works devastated, Big British forces out last night. Accounts of attack by British and Italian based American heavy bombers on Regensburg. Continues with account of RAF attack on Schweinfurt and mentions losses. Second and third column on second item give accounts of operations including claims by escorting American fighters. Mentions specific objectives, describes new tactics used by the RAF at Schweinfurt, reaction of defences, and crew accounts of operations. Concludes with account of other operations against air fields in the Netherlands, Belgium and northern France as well as by Coastal Command in the North Sea.

The great R.A.F. and United States non-stop effort to crush Germany's air strength rose to a new height yesterday when massive forces of American heavy bombers from both Britain and Italy blasted Regensburg, in Bavaria, in the third two-way assault in four days.

Berlin Radio reported that a fourth double attack was in progress last night when it announced violent combats over Germany's southern and western frontiers between night-fighters and British raiders.

This followed closely on big night activities by more than 1,000 R.A.F. bombers. Most of these concentrated on two shattering blows – new tactics against Schweinfurt, in Bavaria, most vital bottleneck of the German arms industry, which had already been battered by day a few hours earlier by American heavy bombers from this country.

Thirty-five R.A.F. bombers are missing from the night's operations, which included attacks on objectives in North-West Germany and the completion of a very extensive mine-laying programme. Intruder patrols, from which one aircraft is missing, destroyed three enemy aircraft.

"Strong forces of heavy bombers of the Eighth A.A.F., escorted by A.A.F. and R.A.F. fighters, to-day attacked aircraft works at Regensburg, ball-bearing works at Stuttgart and other targets in South-West Germany.

"The 15th A.A.F. from Italy joined in the attack on Regensburg. The escorting fighters shot down 27 enemy aircraft, three of our fighters were lost Thirty-one of the 8th A.A.F. bombers are missing."

The destruction of more than 25 German planes of more than 100 which attacked the bomber fleets from Italy was claimed in incomplete reports.

At Regensburg two plane plants were the objective: one at Prufening, making component parts, another at Obertraubling, assembling ME 109s. The latter was raided last Tuesday by the largest force ever sent out by the Mediterranean Allied air forces against a single target.

Photographs developed as soon as the British-based bombers got back from Regensburg showed that the target had been devastated.

Regensburg ranks among the main centres of enemy fighter production. Crews said they left columns of black smoke rising 10000ft high from the plane factories and flames that could be seen 35 miles away.

The R.A.F., in making their first visit to Schweinfurt on Thursday night, departed from their usual tactics of one big cascade bombing on a target in one night.

Fires started on Wednesday by the United States Eighth Army Air Force were still burning on the arrival of our first force. The target was effectively marked and by the end of the second attack a large conflagration was seen, with smoke rising to a great height.

Hundreds of Lancasters and Halifaxes, by far the greater part of the force of well over 1,000 aircraft despatched on Thursday night, made two separate attacks at an interval of two hours. In the force were many Canadian and Australian crews.

Within a few minutes of zero hour an effective concentration of markers was laid. Great numbers of H.E. and incendiary bombs were dropped, and clouds of black smoke began to rise.

The fires were still burning to guide the second force, but again the target indicators were laid. There was much smoke over the target and the markers were needed.

The fires were rapidly extending and the smoke now rose to a great height.

The ground defences were strong initially, especially at the beginning of the first attack, but their efficiency decreased under the weight of bombing.

"The 50 or 60 searchlights around the town were standing aimlessly up on end," said a pilot in the first force.

When the second attack began the searchlights were again forming a ring and another strong barrage was put up, but once again bombing disorganised the ground crews and prevented any effective co-operation.

Some crews reported that they saw fires still burning in Stuttgart, last attacked on Sunday night.

There was better weather on Thursday night over a great part of South-West Germany than there has been in some weeks. The skies were clear and visibility very good.

With the defences in this part of Germany not so strong as around Berlin, cloud cover is less essential.

"The sky was perfectly clear all the way to the target," said a Lancaster squadron commander in the first force.

"Though there was no moon, there was brilliant starlight, and as we flew over the Continent we could see that the ground was snow-covered all the way. It was dazzlingly white round Schweinfurt."

Though a town of no more than 60,000 inhabitants, Schweinfurt is considered by the economic experts who advise in the choice of targets as the most important industrial centre of its kind in Germany or German-occupied Europe and probably the most vital bottleneck in the whole of the enemy's armament industry.

This is because its main factories used to produce about 50 per cent. of the total production of ball and roller bearings of all types available to the Axis.

Every branch of industry supplying the armed forces requires a large supply of bearings. All modern machines made for high performance would be useless without them.

The seven ball-bearing plants in Schweinfurt had a pay-roll of more than 20,000 – one third of the town's population. In scarcely any one other industry in any other town in Germany is there a higher proportion of industrial workers to the whole population.

Throughout yesterday aircraft of the Allied Expeditionary Air Force carried out a series of attacks on enemy-occupied territory. Marauder medium bombers of the United States Ninth Air Force attacked the airfield at Gilze-Rijen, Deelen, and Leeuwarden, in Holland. St. Trond, in Belgium, and military objectives in Northern France.

The Marauders were escorted and covered by R.A.F., Dominion, and Allied Spitfires, and the Bostons, Mitchells, Mosquitoes, and Typhoons by R.A.F. Typhoon fighters.

From all these operations one Mosquito is missing, says a joint Air Ministry and American H.Q. communique.

For the first time this month the Marauders and their R.A.F., Dominion and Allied fighter escorts ran into determined fighter opposition. Four medium bombers and one fighter failed to return.

A medium-sized enemy merchant vessel was hit by a torpedo off the Norwegian coast during the hours of darkness early yesterday morning by a Beaufighter from a New Zealand squadron of Coastal Command, states the Air Ministry.

The attack took the enemy by surprise, and a huge orange explosion was seen on the merchant vessel, followed by a fire on the port bow.