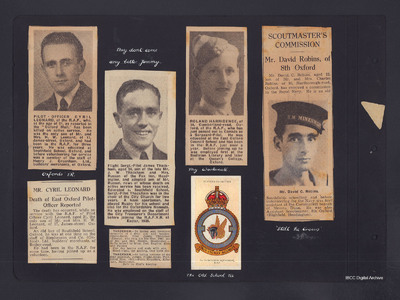 [photograph]
PILOT-OFFICER CYRIL LEONARD, of the R.A.F., who, at the age of 21, as reported in the “Oxford Mail,” has been killed on active service. He was the only son of Mr. and Mrs. H.W. Leonard, of 17, James-street, Oxford, and had been in the R.A.F. for three years. He was educated at Southfield School, Oxford, and before volunteering for service was a member of the staff of Henry J. Greenham, Ltd., builders’ merchants, of Oxford.
[inserted] Oxfords’ V.R. [/inserted]

The death has occurred, while on service with the R.A.F. of Pilot Officer Cyril Leonard, aged 21, the only son of Mr. and Mrs. H.W. Leonard, of 17, James-street Oxford.

An old boy of Southfield School, Oxford, he was at one time on the staff of Stephenson and Co. (Oxford). Ltd., builders’ merchants, of Botley-road.

He had been in the R.A.F. for some time, having joined up as a volunteer.

[inserted] They dont come any better Jimmy. [/inserted]
[photograph]
Flight Sergt.-Pilot James Thackham, aged 24, son of the late Mr. J.W. Thackham and Mrs. Russen of the Fox Inn, Headington, and adopted son of Mr. Russen, news of whose death on active service has been received. Educated at Southfield School, Sergt.-Pilot Thackham was in the choir of the City Church for two years. A keen sportsman, he played Rugby for his school and also for the Oxfordshire Nomads. He was employed on the staff of the City Treasurer’s Department before joining the R.A.F.V.R. at Easter, 1939.

THACKHAM. – In loving and treasured memories of a dear son and brother, Flight-Sergt. Pilot James Thackham (Jimmy), who gave his life May, 1942, son of Mr. and Mrs. Russen, Headington. – Sadly missed by Mum, Dad, Daphne, Elsie and Patrick

Our day begins and ends with you,
Good-night, my darling. God bless you.

[photograph]
ROLAND HARRIDENCE, of 34, Cumberland-road, Oxford, of the R.A.F., who has just passed out in Canada as a Sergeant-Pilot. He was educated at the East Oxford Council School and has been in the R.A.F. just over a year. Before joining up he was employed first at the Bodleian Library and later at the Queen’s College, Oxford.
[inserted] My Workmate. [/inserted]

Mr. David C. Robins, aged 22, son of Mr. and Mrs. Charles Robins, of 90, Marlborough-road, Oxford, has received a commission in the Royal Navy. He is an old

Southfields schoolboy and before volunteering for the Navy was first assistant at the Cornmarket branch of Messrs. Dunn. He was also Assistant Scoutmaster, 8th Oxford (Highfield, Headington).
[inserted] ‘Still he Grows’ [inserted]