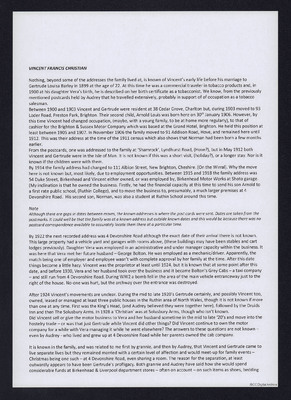 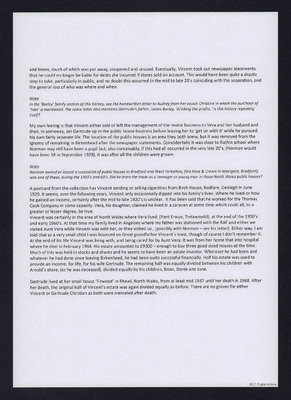 A biography of Vincent, Arnold's father.

Nothing, beyond some of the addresses the family lived at, is known of Vincent’s early life before his marriage to Gertrude Louisa Barley in 1899 at the age of 22. At this time he was a commercial traveler [sic] in tobacco products and, in 1900 at his daughter Vera’s birth, he is described on her birth certificate as a tobacconist. We know, from the previously mentioned postcards held by Audrey that he travelled extensively, probably in support of of [sic] occupation as a tobacco salesman.

Between 1900 and 1903 Vincent and Gertrude were resident at 38 Cedar Grove, Charlton but, during 1903 moved to 93 Loder Road, Preston Park, Brighton. Their second child, Arnold Louis was born here on 30th January 1906. However, by this time Vincent had changed occupation, (maybe, with a young family to be at home more regularly), to that of cashier for the Brighton & Sussex Motor Company which was based at the Grand Hotel, Brighton. He held this position at least between 1905 and 1907. In November 1906 the family moved to 91 Addison Road, Hove, and remained here until 1912. This was their address at the time of the 1911 census which also shows that Norman had been born a few months earlier.

From the postcards, one was addressed to the family at ‘Shamrock’, Lyndhurst Road, (Hove?), but in May 1912 both Vincent and Gertrude were in the Isle of Man. It is not known if this was a short visit, (holiday?), or a longer stay. Nor is it known if the children were with them.

By 1914 the family address had changed to 111 Albion Street, New Brighton, Cheshire. (On the Wirral). Why the move here is not known but, most likely, due to employment opportunities. Between 1915 and 1918 the family address was 54 Duke Street, Birkenhead and Vincent either owned, or was employed by, Birkenhead Motor Works at Shoto garage. (My inclination is that he owned the business. Firstly, he had the financial capacity at this time to send his son Arnold to a first rate public school, (Ruthin College), and to move the business to, presumably, a much larger premises at 4 Devonshire Road. His second son, Norman, was also a student at Ruthin School around this time.

Note
Although there are gaps in dates between moves, the known addresses is where the post cards were sent. Dates are taken from the postmarks. It could well be that the family was at a known address but outside known dates and this would be because there was no postcard correspondence available to accurately locate them there at a particular time.

By 1922 the next recorded address was 4 Devonshire Road although the exact date of their arrival there is not known. This large property had a vehicle yard and garages with rooms above, (these buildings may have been stales and cart lodges previously). Daughter Vera was employed in an administrative and under manager capacity within the business. It was here that Vera met her future husband – George Bolton. He was employed as a mechanic/driver. Apparently, the match being one of employer and employee wasn’t with complete approval by her family at the time. After this date things become a little hazy. Vincent was the proprietor at least until 1924, but it is known that at some point after this date, and before 1930, Vera and her husband took over the business and it became Bolton’s Grey Cabs – a taxi company – and still run from 4 Devonshire Road. During WW2 a bomb fell in the area of the main vehicle entranceway just to the right of the house. No-one was hurt, but the archway over the entrance was destroyed.

After 1924 Vincent’s movements are unclear. During the mid to late 1920’s Gertrude certainly, and possibly Vincent too, owned, leased or managed at least three public houses in the Ruthin area of North Wales, though it is not known if more than one at any time. First was the King’s Head, (and Audrey believed they were together here), followed by the Druids Inn and then the Solusbury [sic] Arms In 1928 a ‘Christian’ was at Solusbury [sic] Arms though who isn’t known.

Did Vincent sell or give the motor business to Vera and her husband sometime in the mid to late ‘20’s and move into the hostelry trade – or was that just Gertrude while Vincent did other things? Did Vincent continue to own the motor company for a while with Vera managing it while he went elsewhere? The answers to these questions are not known – even by Audrey – who lived and grew up at 4 Devonshire Road while her parents owned the cab company.

It is known in the family, and was related to me first by grannie, and then by Audrey, that Vincent and Gertrude came to live separate lives but they remained married with a certain level of affection and would meet-up for family events – Christmas being one such – at 4 Devonshire Road, even sharing a room. The reason for the separation, at least outwardly appears to have been Gertrude’s profligacy. Both grannie and Audrey have said how she would spend considerable funds at Birkenhead & Liverpool department stores – often on account – on such items as shoes, bedding

and linens, much of which was put away, unopened and unused. Eventually, Vincent took out newspaper statements that he could no longer be liable for debts she incurred if stores sold on account. This would have been quite a drastic step to take, particularly in public, and no doubt this occurred in the mid to late 20’s coinciding with the separation, and the general loss of who was where and when.

Note
In the ‘Barley’ family section of this history, see the handwritten letter to Audrey from her cousin Christine in which the purchase of ‘hats’ is mentioned. The same letter also mentions Gertrude’s father, James Barley, ‘drinking the profits.’ Is this history repeating itself?

My own feeling is that Vincent either sold or left the management of the motor business to Vera and her husband and then, in someway, set Gertrude up in the public house business before leaving her to ‘get on with it’ while he pursued his own fairly separate life. The location of the public houses is an area they both knew, but it was removed from the ignomy [sic] of remaining in Birkenhead after the newspaper statements. Coincidentally it was close to Ruthin school where Norman may still have been a pupil but, also conceivably, if this had all occurred in the very late 20’s, (Norman would have been 18 in September 1928), it was after all the children were grown.

Note
Norman owned or leased a succession of public houses in Bradford and West Yorkshire, (the Rose & Crown in Westgate, Bradford), was one of these, during the 1950’s and 60’s. Did he learn the trade as a teenager or young man in those North Wales public houses?

A postcard from the collection has Vincent sending or selling cigarettes from Birch House, Bodfare, Denbigh In June 1929. It seems, over the following years, Vincent only occasionally dipped into his family’s lives. Where he lived or how he gained an income, certainly after the mid to late 1920’s is unclear. It has been said that he worked for the Thomas Cook Company in some capacity. Vera, his daughter, claimed he lived in a caravan at some time which could all, to a greater or lesser degree, be true.

Vincent was certainly in the area of North Wales where Vera lived, (Pant Erwyn, Trelawnydd), at the end of the 1950’s and early 1960’s. At that time my family lived in Angelsey where my father was stationed with the RAF and either we visited Aunt Vera while Vincent was with her, or they visited us, (possibly with Norman – see his letter). Either way, I am told that as a very small child I was bounced on Great grandfather Vincent’s knee, though of course I don’t remember it. At the end of his life Vincent was living with, and being cared for by Aunt Vera. It was from her home that into hospital where he died in February 1964. His estate amounted to £9300 – enough to buy three good sized houses at the time. Much of this was held in stocks and shares and he seems to have been an astute investor. Wherever he had been and whatever he had done since leaving Birkenhead, he had been quite successful financially. Half his estate was used to provide an income, for life, for his wife Gertrude. The remaining half was equally divided between his children with Arnold’s share, (as he was deceased), divided equally by his children, Brian, Derek and June.

Gertrude lived at her small house ‘Firwood’ in Rhewl, North Wales, from at least mid 1937 until her death in 1968. After her death, the original half of Vincent’s estate was again divided equally as before. There are no graves for either Vincent or Gertrude Christian as both were cremated after death.