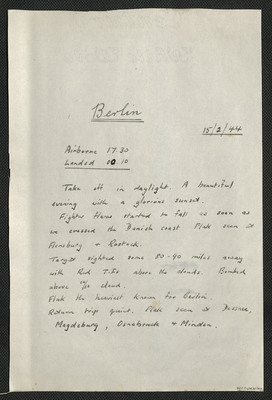 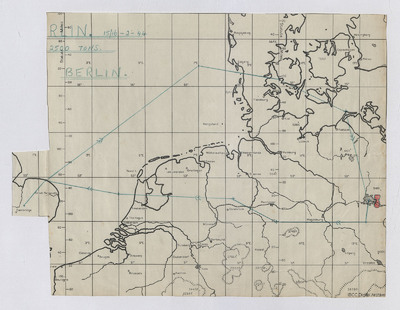 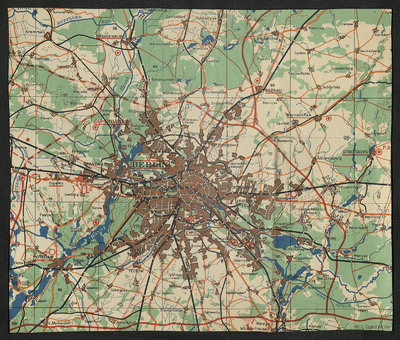 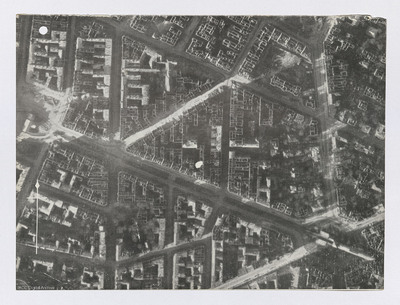 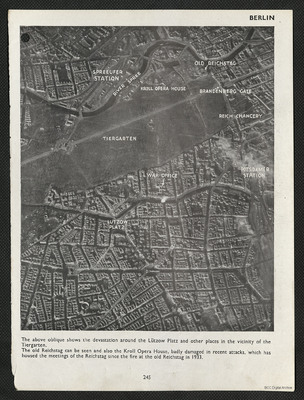 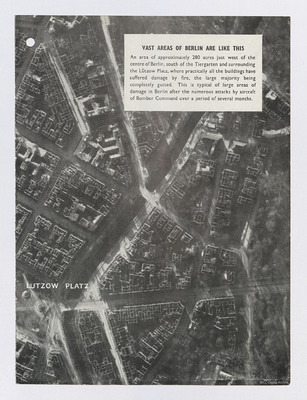 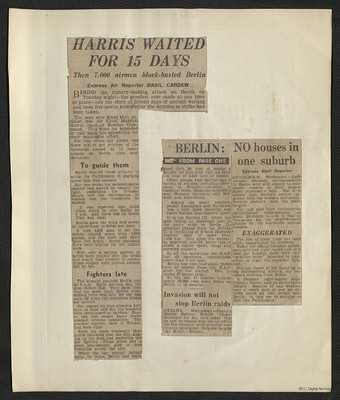 Seven items, Edward's description of the operation, his navigation plot, a map of Berlin. Press clippings captioned 'Vast areas of Berlin are like this' shows an area of about 280 acres showing the large amount of bomb damage. There is another press cutting captioned 'Berlin' showing the devastation around the Tiergarten. A newspaper cutting captioned 'Harris waited for 15 days' described the lead up to the operation and it's execution.

Take off in daylight. A beautiful evening with a glorious sunset.

Fighter flares started to fall as soon as we crossed the Danish coast. Flak seen at Flensburg & Rostock.

Target sighted some 80-90 miles away with Red T.Is above the clouds. Bombed above 10/10 cloud.

Flak the heaviest known for Berlin.

[map of route to Berlin & return]

The above oblique shows the devastation around the Lützow Platz and other places in the vicinity of the Tiergarten.

An area of approximately 280 acres just west of the centre of Berlin, south of the Tiergarten and surrounding the Lützow Platz, where practically all the buildings have suffered damage by fire, the large majority being completely gutted. This is typical of large areas of damage in Berlin after the numerous attacks by aircraft of Bomber Command over a period of several months.

Behind the history-making attack on Berlin on Tuesday night – the greatest ever made at any time or place – lies the story of fifteen days of patient waiting and then five hectic hours after the decision to strike had been taken.

The man who made that decision was Air Chief Marshal Harris, head of Bomber Command. This time he intended to call upon his squadrons for their maximum effort.

For two weeks spy planes had flown out to get pictures of the holocaust caused by 14 heavy attacks on Berlin since mid-November.

Harris wanted those pictures to guide the Pathfinders in marking areas that had escaped.

For two weeks his meteorological experts had waited for exactly the right conditions. On Tuesday Harris had the information he wanted and the conditions he wanted.

It was expected that thick cloud would be over Berlin by 9 p.m. And there was no moon. That was ideal.

Harris gave the word and scores of operational airfields got busy.

It took 4,000 men to get the bombs aboard more than 1,000 planes, and the work took more than five hours. Seven thousand fliers were briefed for the night’s work.

Well over a million gallons of petrol were poured into the tanks and nearly that number of ammunition rounds were stowed aboard, belt by belt.

The armada reached Berlin just on 9 p.m. Early arrivals met the most violent flak. They knew then that the main night fighter intercepting force was late, for the flak cools off when the defending planes are around.

For almost all that precious half hour of blast and fire the bombers were unharassed [sic] by fighters. Even in the last stages many crews bombed without opposition. The weather experts back in Britain, had been right.

After the main onslaught Mosquitoes patrolled over the city, stoking up the fires and peppering the fire fighters. These pilots saw a great pear-shaped glow of fires stretched across the city.

When the last bomber banked away for home, Berlin had taken

[symbol] FROM PAGE ONE

Other planes had carried out a variety of attacks, including diversions to Frankfort-on-Oder, a chemical town, Mosquito intrusions over Western Germany and Holland, and minelaying.

Among the heavy bombers, mostly Lancasters and Halifaxes, was a new, more powerful and faster Halifax four-engined plane.

It is the Halifax III., which has been taking an important part in the heavy raids on Berlin. Its principal change from the Halifax II. is the fitting of Bristol Hercules engines, each of more than 1,650 h.p. This gives the aircraft an improved take-off, better rate of climb, a higher speed, range and carrying capacity.

In all the operations the R.A.F. lost 43 machines, considerably lower than 5 per cent.

Berlin has now had about 35,000 tons of bombs from the R.A.F. since the war started. This includes 87 minor raids.

Invasion will not stop Berlin raids

OTTAWA. Wednesday. – Captain Harold Balfour, British Under-Secretary for Air, said today that he saw no reason why the air effort for the invasion need interrupt continuous saturation raids on targets like Berlin. – Reuter.

NO houses in one suburb

STOCKHOLM. Wednesday. – Late tonight Swedish correspondents in Berlin were still unable to telephone reports to their papers about yesterday’s raid. But it is known that Berlin’s centre, together with the western and south-western districts, were the main targets.

The raid may have far-reaching psychological consequences, as many Berliners believe it was in retaliation for the much-boomed [sic] attacks by the Luftwaffe against London.

The size of these raids has been widely exaggerated by Goebbels.

Today the official German spokesman switched right round and said that the London raids were only “practice raids” intended to train crews to repel the expected invasion.

Not one house is left standing in the Schoeneberg district, say travellers arriving from Berlin.

A German night-fighter pilot, Captain Peters, said on Berlin radio tonight: Because of bad weather only a small part of our air defence could go into action over Berlin. It took me 45 minutes to find two Pathfinders.”