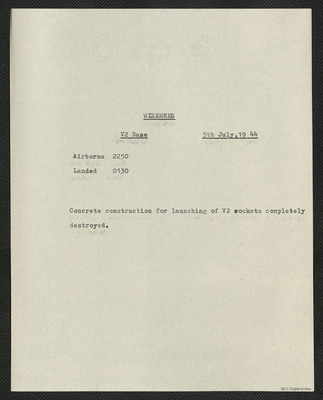 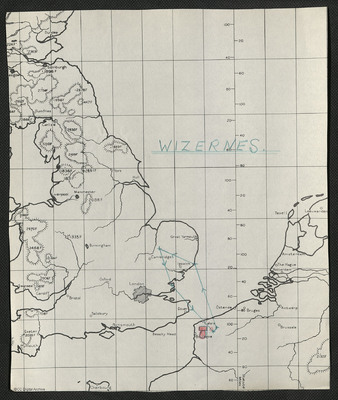 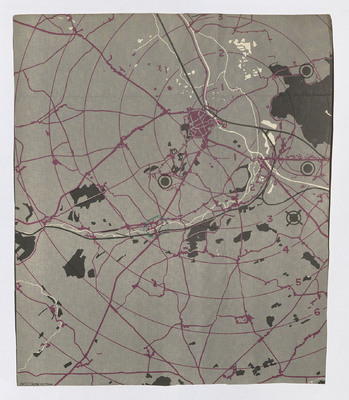 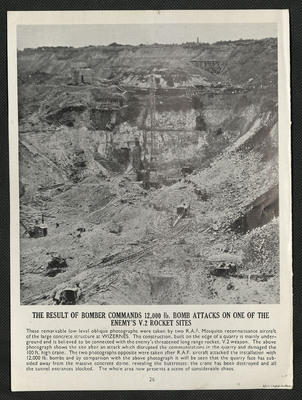 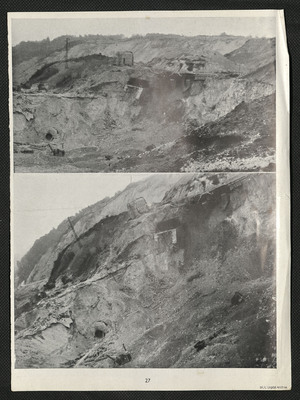 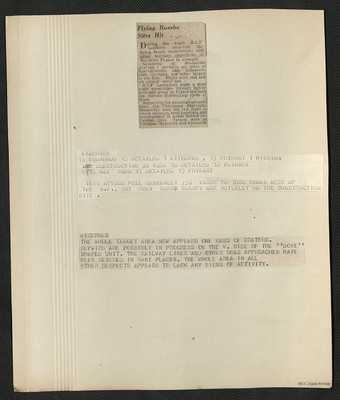 Six items, Edward's very brief description of the operation, his navigation plot, the expected H2S return over the target. Two press clipping, captioned 'The result of Bomber Commands 12,000 lb bomb attacks on one of the Enemy's V.2 rocket sites'. The first photograph is an oblique low level reconnaissance showing the quarry construction site and concrete 'dome' after the operation described by Edward.
The second clipping shows the same area a few days later after the 'Tallboys' had been used.
The last item is part of an official report on the operation that Edward took part in, it gives details of the aircraft and their squadrons that took part, a summary of the raid, 'not very accurate but the surrounding infrastructure had been damaged'. There is also a small press cutting referring to operations over northern Europe in general.

THE RESULT OF BOMBER COMMANDS 12,000 lb. BOMB ATTACKS ON ONE OF THE ENEMY'S V.2 ROCKET SITES
These remarkable low level oblique photographs were taken by two R.A.F. Mosquito reconnaissance aircraft of the large concrete structures at WIZERNES. The construction, built on the edge of a quarry is mainly underground and is believed to be connected with the enemy's threatened long range rocket, V.2 weapon. The above photograph shows the site after an attack which disrupted the communications in the quarry and damaged the 100ft. high crane. The two photographs opposite were taken after R.A.F. aircraft attacked the installation with 12,000 lb. bombs and by comparison with the above photograph it will be seen that the quarry face has subsided away from the massive concrete dome, revealing the buttresses; the crane has been destroyed and all the tunnel entrances blocked. The whole area now presents a scene of considerable chaos.

During the night R.A.F bombers attacked the flying bomb installations and other military objectives in Northern France in strength.

Squadrons of Mosquitoes attacked a synthetic air plant at Buer-Scnolven, near Gelsenkirchen. Germany, and other targets in the Ruhr Mines were laid and six aircraft[missing letter] were lost.

R.A.F. Lancasters made a deep night penetration through fighter defended areas in France to attack the railway marshalling yards at Dijon.

Supporting the American advance down the Cherbourg Peninsula, Mosquitoes went out last night to attack railways, road junctions and encampments in woods behind the German lines. Targets were at Villedieu. Hyenville and Granville.

THIS ATTACK FELL GENERALLY 750 YARDS TO 1000 YARDS WEST OF THE A.P., BUT MANY BOMB[deleted]S[/deleted] BURSTS ARE ACTUALLY ON THE CONSTRUCTION SITE.

WIZERNES
THE WHOLE TARGET AREA NOW APPEARS ONE MASS OF CRATERS. REPAIRS ARE POSSIBLY IN PROGRESS ON THE W. SIDE OF THE "DOME" SHAPED UNIT. THE RAILWAY LINES AND OTHER ROAD APPROACHES HAVE BEEN SEVERED IN MANY PLACES. THE WHOLE AREA IN ALL OTHER RESPECTS APPEARS TO LACK ANY SIGNS OF ACTIVITY.