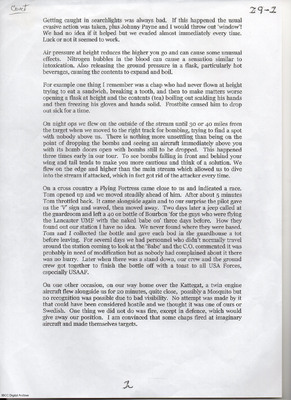 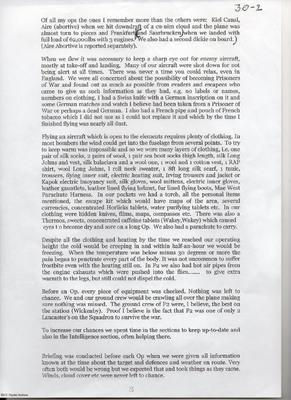 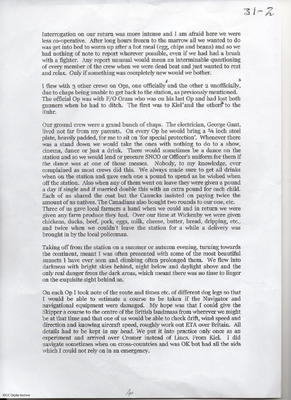 Mention action on getting caught in searchlights, effects of altitude on aircrew, avoiding bombs from above, encounters with B-17 while on operations and getting a bottle of Bourbon from the American crew later. Mentions encounter with probable Mosquito, operation to Kiel Canal, friendly aircraft being attacked on return to base, conditions while flying, clothing, operating procedures, briefing and post flight debrief. Describes ground crew and work they did. Concludes with comments on summer operations and that he took notes on each operation of routes and times. Pages numbered. 29, 30, 31 and 2,3 and 4.

[underlined] Account of operations[/underlined]
Getting caught in searchlights was always bad. If this happened the usual evasive action was taken, plus Johnny Payne and I would throw out 'window'!
We had no idea if it helped but we evaded almost immediately every time.
Luck or not it seemed to work.
Air pressure at height reduces the higher you go and can cause some unusual
effects. Nitrogen bubbles in the blood can cause a sensation similar to
intoxication. Also releasing the ground pressure in a flask, particularly hot
beverages, causing the contents to expand and boil.
For example one thing I remember was a chap who had never flown at height
trying to eat a sandwich, breaking a tooth, and then to make matters worse
opening a flask at height and the contents (tea) boiling out scalding his hands
aud then freezing his gloves and hands solid. Frostbite caused him to drop
out sick for a time.
On night Ops we flew on the outside of the stream until 30 or 40 miles from
the target when we moved to the right track for bombing, trying to find a spot
with nobody above us. There is nothing more unsettling than being on the
point of dropping the bombs and seeing an aircraft immediately above you
with its bomb doors open with bombs still to be dropped. This happened
three times early in our tour. To see bombs falling in front and behind your
wing and tail tends to make you more cautious and think of a solution. We
flew on the edge and higher than the main stream which allowed us to dive
into the stream if attacked, which in fact got rid of the attacker every time.
On a cross country a Flying Fortress came close to us and indicated a race.
Tom opened up and we moved steadily ahead of him; After about 5 minutes
Tom throttled back. It came alongside again and to our surprise the pilot gave
us the ‘V’ sign and waved, then moved away. Two days later a jeep called at
the guardroom and left a 40 oz bottle of Bourbon 'for the guys who were flying
the Lancaster UMF with the naked babe on' three days before. How they
found out our station I have no idea. We never found where they were based.
Tom and I collected the bottle and gave each bod in the guardhouse a tot
before leaving. For several days we had personnel who didn't normally travel
around the station coming to look at the 'Babe' and the c.o. commented it was
probably in need of modification but as nobody had complained about it there
was no hurry. Later when there was a stand down, our crew and the ground
crew got together to finish the bottle off with a toast to all USA Forces,
especially USAAF.
On one other occasion, on our way home over the Kattegat, a twin engine
aircraft flew alongside us for 20 minutes, quite close, possibly a Mosquito but
no recognition was possible due to bad visibility. No attempt was made by it
that could have been considered hostile and we thought it was one of ours or
Swedish. One thing we did not do was fire, except in defence, which would
give away our position. I am convinced that some chaps fired at imaginary
aircraft and made themselves targets.

Of all my ops the ones I remember more than the others were: Kiel Canal, Aire (abortive) when we hit downdraft of a cu-nim cloud and the plane was almost torn to pieces and Frankfurt and Saarbrucken when we landed with fun load of 62,000lbs with 3 engines. e also had a second dickie on board) (Aire Abortive is reported separately).
When we flew it was necessary to keep a sharp eye out for enemy aircraft, mostly at take-off and landing. Many of our aircraft were shot down for not being alert at an times. There was never a time you could relax, even in
England. We were an concerned about the possibility of becoming Prisoners
of War and found out as much as possible from evaders and escapees who
came to give us such information as they had, e.g. no labels or names.
numbers on clothing. I had a Swiss knife with a German inscription on it and
some German matches and watch I believe had been taken from a Prisoner of
War or perhaps a dead German. I also had a French pipe and pouch of French
tobacco which I did not use as I could not replace it and which by the time I
finished flying was nearly all dust.
Flying an aircraft which is open to the elements requires plenty of clothing. In
most bombers the wind could get into the fuselage from several points. To try
to keep warm was impossible and so we wore many layers of clothing, Le. one
pair of silk socks, 2 pairs of wool, 1 pair sea boot socks thigh length, silk Long
Johns and vest, silk balaclava and a wool one, 1 wool and 1 cotton vest, 1 RAF
shirt, wool Long Johns, I roll neck sweater, 1 8ft long silk scarf, 1 tunic,
trousers, flying inner suit, electric heating suit, Irving trousers and jacket or
Kapok electric buoyancy suit, silk gloves, wool mittens, electric inner gloves,
leather gauntlets, leather lined flying helmet, fur lined flying boots, Mae West
Parachute Harness. In our pockets we had a torch, all the personal items
mentioned, the escape kit which would have maps of the area, several
currencies, concentrated Horlicks tablets, water purifying tablets etc. in our
clothing were hidden knives, films, maps, compasses etc. There was also a
Thermos, sweets, concentrated caffeine tablets (Wakey, Wakey) which caused
eyes to become dry and sore on a long Op. We also had a parachute to carry.
Despite all the clothing and heating by the time we reached our operating
height the cold would be creeping in and within half-an-hour we would be
freezing. When the temperature was below minus 30 degrees or more the
pain began to penetrate every part of the body. It was not uncommon to suffer
frostbite even with the heating still on. In F2 we also had hot air pipes from
the engine exhausts which were pushed into the flies to give extra
warmth to the legs, but still could not dispel the cold.
Before an Op. every piece of equipment was checked. Nothing was left to
chance. We and our ground crew would be crawling all over the plane making
sure nothing was missed. The ground crew of F2 were, 1 believe, the best on
the station (Wickenby). Proof I believe is the fact that F2 was one of only 2
Lancaster's on the Squadron to survive the war.
To increase our chances, we spent time in the sections to keep up-to-date and
also in the Intelligence section, often helping there.
Briefing was conducted before each Op when we were given all information
known at the time about the target and defences and weather en route. Very
often both would be wrong but we expected that and took things as they came.
Winds, cloud cover etc were never left to chance.


Interrogation on our return was more intense and I am afraid here we were less co-operative. After long hours frozen to the marrow all we wanted to do was get into bed to warm up after a hot meal (egg, chips and beans) and so we had nothing of note to report wherever possible, even if we had had a brush with a fighter. Any report unusual would mean an interminable questioning of every member of the crew when we were dead beat and just wanted to rest and relax. Only if something was completely new would we bother.

I flew with 3 other crews on Ops, one officially and the other 2 unofficially, due to chaps being unable to get back to the station, as previously mentioned. The official Op was with F/O Oram who was on his last Op and had lost both gunners when he had to ditch. The first was to Kiel and the others to the Ruhr.
Our ground crew were a grand bunch of chaps. The electrician, George Gant, lived not far from my parents. On every Op he would bring a 3/4 inch steel plate, heavily padded, for me to sit on 'for special protection'. Whenever there was a stand down we would take the ones 'with nothing to do to a show, cinema, dance or just a drink. There would sometimes be a dance on the station and so we would lend or procure SNCO or Officer's uniform for them if the dance was at one of those messes. Nobody, to my knowledge, ever complained as most crews did this. We always made sure to get all drinks when on the station and gave each one a pound to spend as he wished when off the station. Also, when any of them went on leave they were given a pound a day if single and if married double this with an extra pound for each child.

Each of us shared the cost but the Canucks insisted on paying twice the
amount of us natives. The Canadians also bought two rounds to our one, etc. Three of Us gave local farmers a hand when we could and in return we were given any farm produce they had. Over our time at Wickenby we were given chickens, ducks, beef, pork, eggs, milk, cheese, butter, bread, dripping, etc., and twice when we couldn't leave the station for a while a delivery was brought in by the local policeman.
Taking off from the station on a summer or autumn evening, turning towards the continent, meant I was often presented with some of the most beautiful sunsets I have ever seen and climbing often prolonged them. We flew into darkness with bright skies behind, night below and daylight above and the only real danger from the dark areas, which meant there was no time to linger on the exquisite sight behind us.
On each Op I took note of the route and times etc. of different dog legs so that I would be able to estimate a course to be taken if the Navigator and navigational equipment were damaged. My hope was that I could give the Skipper a course to the centre of the British landmass from wherever we might be at that time and that one of us would be able to check drift, wind speed and direction and knowing aircraft speed, roughly work out ETA over Britain. All details had to be kept in my head. We put it into practice only once as an experiment and arrived over Cromer instead of Lincs. From Kiel. I did navigate sometimes when on cross-countries and was OK but had all the aids which I could not rely on in an emergency.