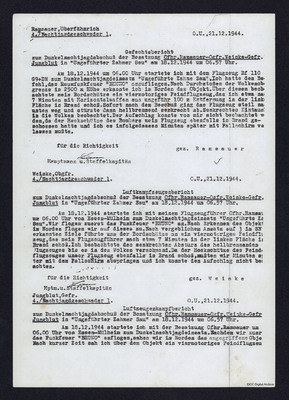 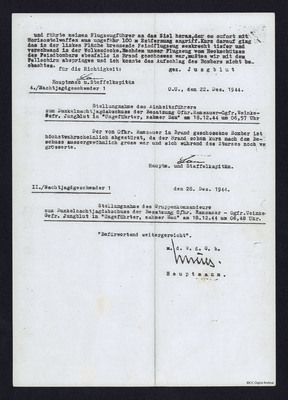 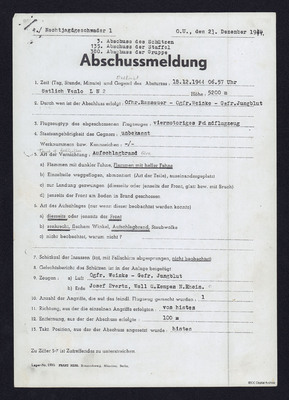 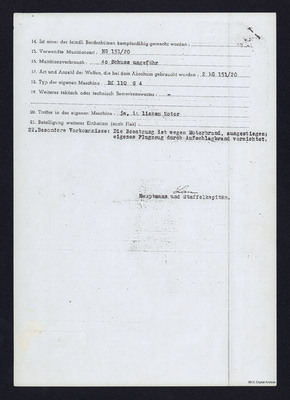 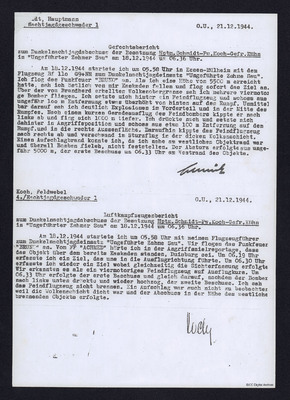 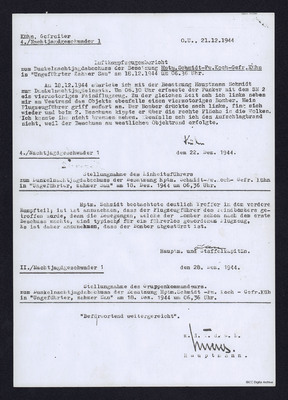 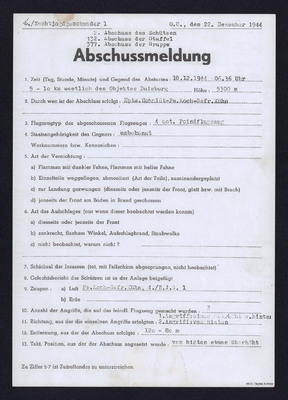 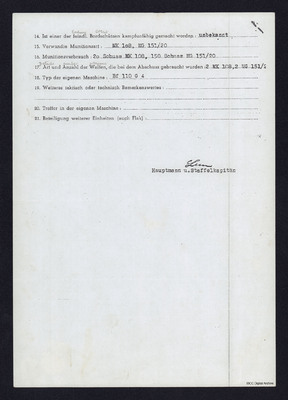 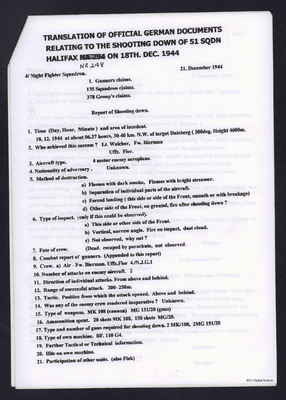 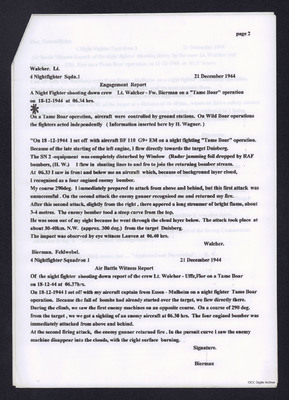 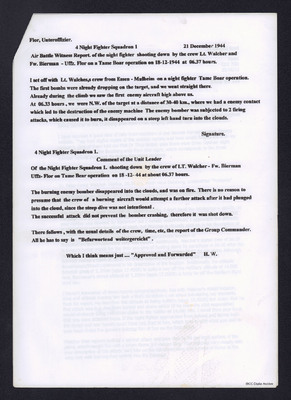 A series of Luftwaffe engagement reports, some in German, some translated concerning the attacks on a four engined bomber in the early hours of 18 December 1944 probably Henry Wagner's Halifax.

Report of Shooting down.

a) Flames with dark smoke, Flames with bright streamer.
b) Separation of individual parts of the aircraft.
c) Forced landing (this side or side of Front, smooth or with breakage)
d) Other side of the Front, on ground, fire after shooting down?

6. Type of impact. (only if this could be observed).

a) This side or other side of the Front.
b) Vertical, narrow angle. Fire on impact, dust cloud.
c) Not observed, why not?

7. Fate of crew. (Dead. escaped by parachute, not observed.

8. Combat report of gunners. (Appended to this report)

10. Number of attacks on enemy aircraft. 2

11. Direction of individual attacks. From above and behind.

13. Tactic. Position from which the attack opened. Above and behind.

14. Was any of the enemy crew rendered inoperative? Unknown.

21. Participation of other units. (also Flak)

“On 18-12-1944 I set off with aircraft BF 110 G9+EM on a night fighting “Tame Boar” operation. Because of the late starting of the left engine, I flew directly towards the target Duisberg. The SN 2 -equipment was completely disturbed by Window (Radar jamming foil dropped by RAF bombers, (H.W.) I flew in slanting lines to and fro to join the returning bomber stream. At 06.33 I saw in front and below me an aircraft which, because of background layer cloud, I recognised as a four engined enemy bomber.

My course 290deg. I immediately prepared to attack from above and behind, but this first attack was unsuccessful. On the second attack the enemy gunner recognised me and returned my fire. After this second attack, slightly from the right, there appeared a long streamer of bright flame, about 3-4 metres. The enemy bomber tood [sic] a steep curve from the top.

He was soon out of my sight because he went through the cloud layer below. The attack took place at about 30-40km. N.W. (approx. 300 deg.) from the target Duisberg.

The impact was observed by eye witness Lauven at 06.40 hrs.

On 18-12-1944 I set off with my aircraft captain from Essen - Mulheim on a night fighter Tame Boar operation. Because the fall of bombs had already started over the target, we flew directly there. During the climb, we saw the first enemy machines on an opposite course. On a course of 290 deg. from the target, we got a sighting of an enemy aircraft at 06.30 hrs. The four engined bomber was immediately attacked from above and behind.

At the second firing attack, the enemy gunner returned fire. In the pursuit curve I saw the enemy machine disappear into the clouds, with the right surface burning.

Air Battle Witness Report of the night fighter shooting down by the crew Lt. Walcher and Fw. Bierman - Uffz. Flor on a Tame Boar operation on 18-12-1944 at 06.37 hours.

I set off with Lt. Walches,s [sic] crew from Essen - Mulheim on a night fighter Tame Boar operation. The first bombs were already dropping on the target, and we went straight there. Already during the climb we saw the first enemy aircraft high above us.

At 06.33 hours, we were N.W. of the target at a distance of 30-40 km., where we had a enemy contact which led to the destruction of the enemy machine The enemy bomber was subjected to 2 firing attacks, which caused it to burn, it disappeared on a steep left hand turn into the clouds.

The burning enemy bomber disappeared into the clods, and was on fire. There is no reason to presume that the crew of a burning aircraft would attempt a further attack after it had plunged into the cloud, since the steep dive was not intentional. The successful attack did not prevent the bomber crashing, therefore it was shot down.

There follows, with the usual details of the crew, time etc, the report of the Group Commander. All he has to say is “Befurwortend weitergereicht”.

Which I think means just …. “Approved and Forwarded” H.W.