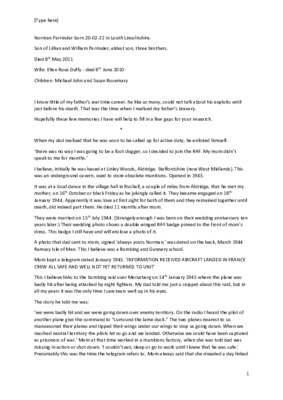 Information about Norman Parrinder written by his daughter Suzannah Aston. Mentions meeting her mother and marrying as well as some recollections about operations including force landing in neutral territory. Continues with comments on his feelings and life after the war.

Norman Parrinder born 20-02-22 in Louth Lincolnshire.
Son of Lillian and William Parrinder, eldest son, three brothers.
Died 8th May 2011
Wife: Ellen Rose Duffy - died 8th June 2010
Children: Michael John and Susan Rosemary
I know little of my father's war time career, he like so many, could not talk about his exploits until
just before his death. That was the time when I realised my father's bravery.
Hopefully these few memories I have will help to fill in a few gaps for your research.
*
When my dad realised that he was soon to be called up for active duty, he enlisted himself.
'there was no way I was going to be a foot slogger, so I decided to join the RAF. My mom didn't
speak to me for months.'
I believe, initially he was based at Linley Woods, Aldridge. Staffordshire (now West Midlands). This
was an underground cavern, used to store obsolete munitions. Opened in 1943.
It was at a local dance in the village hall in Rushall, a couple of miles from Aldridge, that he met my
mother, on 16th October or black Friday as he jokingly called it. They became engaged on 18th
January 1944. Apparently it was love at first sight for both of them and they remained together until
death, did indeed part them. He died 11 months after mom.
They were married on 15th July 1944. (Strangely enough I was born on their wedding anniversary ten
years later.) Their wedding photo shows a double winged RAF badge pinned to the front of mom's
dress. This badge I still have and will enclose a photo of it.
A photo that dad sent to mom, signed 'always yours Norman,' was dated on the back, March 1944
Ramsey Isle of Man. This I believe was a Bombing and Gunnery school.
Mom kept a telegram dated January 1945. 'INFORMATION RECEIVED AIRCRAFT LANDED IN FRANCE
CREW ALL SAFE AND WELL NOT YET RETURNED TO UNIT'
This I believe links to the bombing raid over Merseberg on 14th January 1945 where the plane was
badly hit after being attacked by night fighters. My dad told me just a snippet about this raid, but in
all my years it was the only time I saw tears well up in his eyes.
The story he told me was:
'we were badly hit and we were going down over enemy territory. On the radio I heard the pilot of
another plane give the command to "surround the lame duck." The two planes nearest to us
manoeuvred their planes and tipped their wings under our wings to stop us going down. When we
reached neutral territory the pilots let us go and we landed. Otherwise we could have been captured
as prisoners of war.' Mom at that time worked in a munitions factory, when she was told dad was
missing in action or shot down. '( couldn't eat sleep or go to work until I knew that he was safe.'
Presumably this was the time the telegram refers to. Mom always said that she dreaded a day linked
1

[page break]
to 7 i.e. 7th 14th 21st as it was always on one of these dates she was notified, or something
happened to dad in action.
Mom told me many times how dad was haunted by nightmares about what he had done in the war.
He was ashamed of the innocent people he knew he had killed, Dresdon being the worst. Also the
pain of seeing his friends killed deeply played on his mind.
Dad told me that it was when they were returning home and landing that the planes and crew were
in the worst danger. Enemy planes could attack them and they were unable to fight back. He said he
saw planes bombed with his friends on board.
Although dad had been raised a strict catholic, he turned his back on religion after the war. 'no god
could exist and let that happen.'
At the end of the war he was sent to India, Madras I believe. He left a photo album of pictures taken
at this time. I will send you the ones with crew in them. I do have the complete album. He told me
how he loved it there and wanted mom to go out there to live, but she was too much a home girl. He
befriended a stray dog whilst there, it followed him everywhere. A photo of the dog is enclosed. He
was heartbroken when he had to leave it behind to come home.
Both my parents said the war years and just after were the best days of their lives. Friends were true
friends, and they all worked together to rebuild their lives. After the war dad returned to Rushall
where they lived in a prefab house. Dad was a highly skilled carpenter and made most of their
furniture, mom used to brag to the family how they were the first house in the village to have a
divan bed, dad had made it. He was wonderful at working with his hands, he made most of my
brother and my toys when we were growing up. Dolls house, fort etc. he could make anything from
just scraps of wood, he was amazing.
He became a carpet fitter and upholsterer, when I got married he carpeted my whole house from
expensive offcuts from jobs.
In the 1970's he and mom moved to Blackpool and opened a B&B, they move back to the Midlands
after a few years due to mom's ill health.
They then moved to Glastonbury, Somerset to be near me and my daughter. There they stayed until
mom died on 9th May 2010. Dad moved to the Isle of Wight to be in a care home near me (I lived on
a boat and he was very disabled), he was only there for 2 weeks before going into St Mary's hospital
where he died in my arms as my mother had also done. I returned their ashes to Glastonbury where
I scattered then in Glastonbury Abbey. King Arthur and Guinevere are said to be buried there. If it's
good enough for them, it's good enough for my mom and dad. They lie with a beautiful view of
Glastonbury Tor and the flat that they lived in for almost 20 years.
What can I say of my dad other than he was a gentleman in all ways. He was devoted to my mom
and his family right to the end. He was very loved by us all and we were very loved by him.
He lived for his granddaughter, Nicola Rachael, and was the nearest thing to a father that she had.
He also lived to see his first great granddaughter born Tillie Mia. Strangely enough, considering how
close my daughter was to my parents, my daughter went into labour on dad's birthday and was born
2 days later on dad's mom's birthday. Amelie Isobella was born on mom's birthday 28th April.
I hope this helps a little.
2

[page break]
Thank you for taking the time and trouble to make contact, my daughter and I are over the moon to
think that at last we will get answers to the questions we can no longer ask him. We look forward to
hearing anything about dad and his squadron. If there is any other help we can give, please let us
know. I will forward on to my brother all information we receive. Bless you for this, it means a lot.
All the best
Suzannah Aston
3