49 items. Collection concerns Leslie Alfred Davies (1922-1996, 1581024 Royal Air Force) and his brother John Richard Davies ( - 1944, 1580941). Leslie served as a Lancaster navigator on of 50 Squadron completing his tour of 30 operations in March 1945. John served a Lancaster bomb aimer on 166 Squadron He was killed in action 3 August 1944. Collection consists of Leslie's crew's individual logbooks and biographies, operational histories, photographs of people, aircraft and a grave, documents and correspondence.

The collection has been donated to the IBCC Digital Archive by Murray Davies and catalogued by Nigel Huckins.

Additional information on John Richard Davies is available via the IBCC Losses Database.

Mystery object from a Lancaster 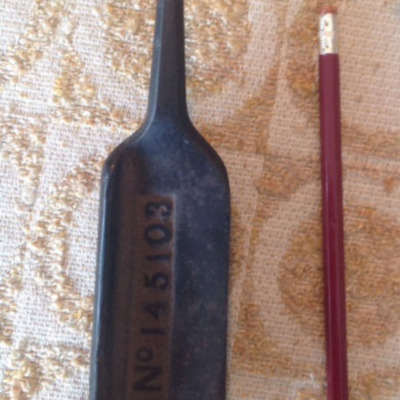 A metal object inscribed “Ra N° 145103” alongside a pencil for scale, submitted with caption 'Mystery object from a Lancaster'. Additional information about this item was kindly provided by the donor. Seven aircrew all wearing Mae Wests sitting on a bomb trolley with part of an aircraft in the background. 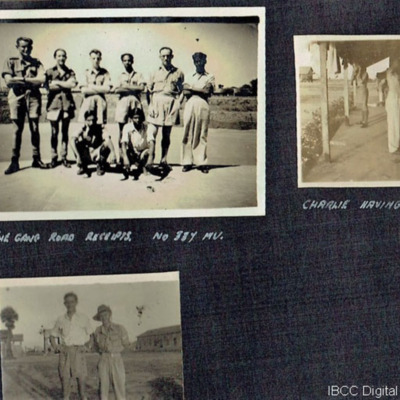 Thirty airmen in front of a wooden hut 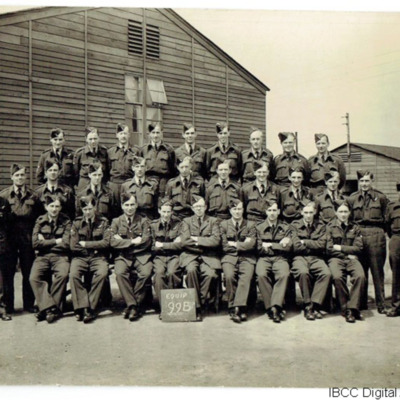 Thirty airmen sitting and standing in three rows, all but one wearing battledress and side caps, man on left wears uniform tunic. In the background wooden huts. In front a sign with 'Equip 99B'.

This item was sent to the IBCC Digital Archive…

A man and a dog 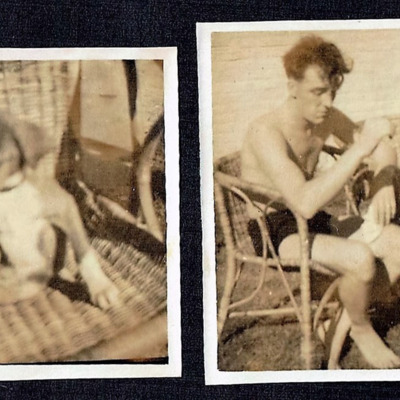 On the left a close up of a dog sitting in a wicker chair. On the right a full length image of a man wearing swimming trunks sitting on a wicker chair with another chair to the right.
This item was sent to the IBCC Digital Archive already in digital… 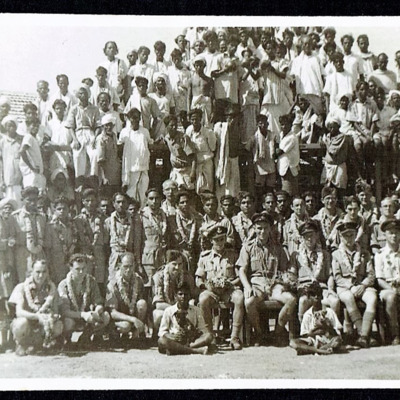 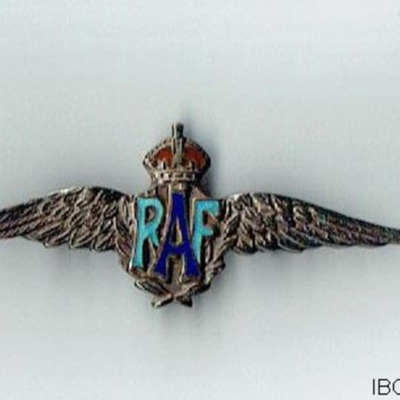 Badge previously belonged to LA Davies, submitted with title; 'dad 4 (2). Additional information about this item was kindly provided by the donor. 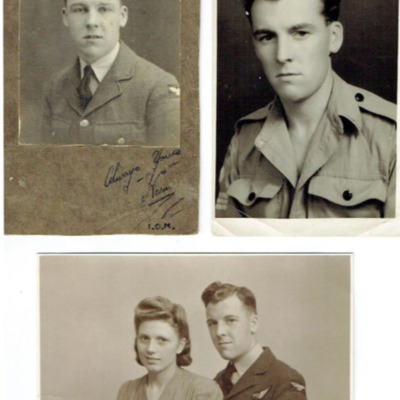 Two airmen standing by a Lancaster 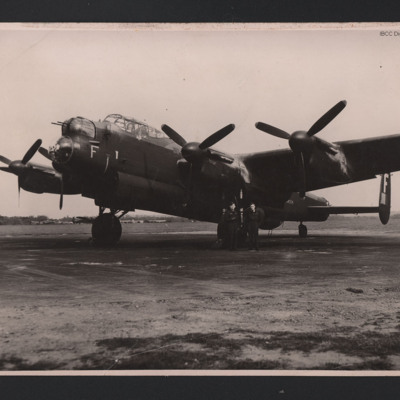 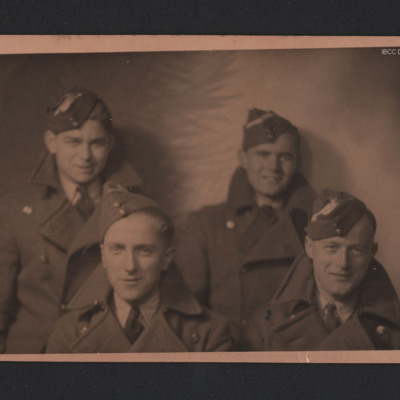 Four airman wearing greatcoats and side caps. On the reverse 'unknown'. 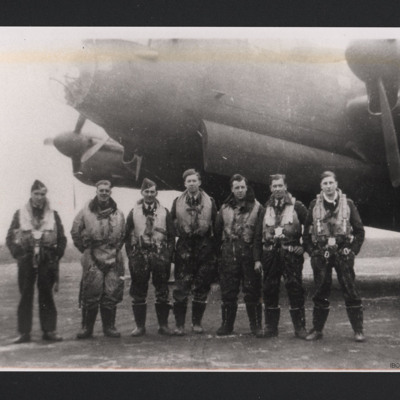 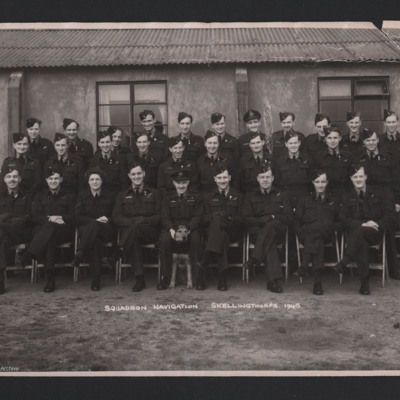 Twenty-nine navigators and one Women's Auxiliary Air Force member sitting and standing in three rows in front of a single story hut. A dog is in centre in the front row. Captioned 'Squadron Navigation, Skellingthorpe 1945'. On the reverse 'L A Davies… 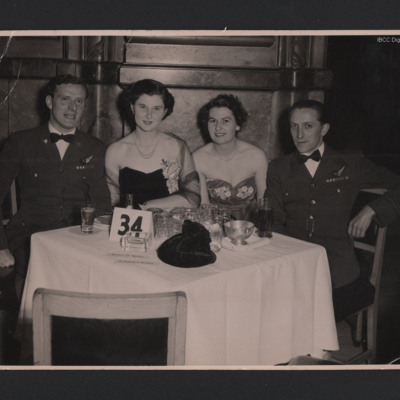 Two couples, men wearing uniform tunic with half brevet. All sitting at a table with number '34'. On the reverse 'Leslie + Josephine married two days after Dresden'. 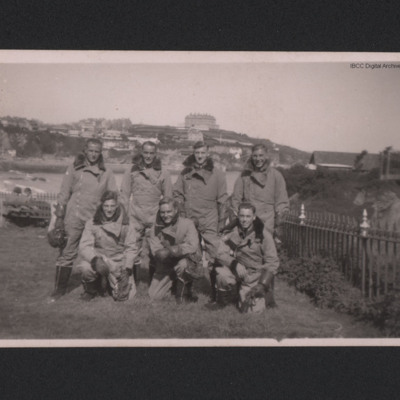 Seven aircrew, three kneeling and four standing in line. All are wearing Sidcot flying suits. In the background a bay with buildings on far shore. 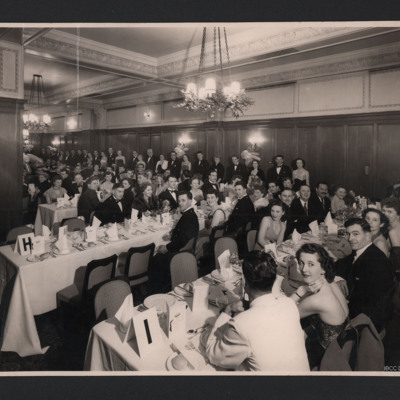 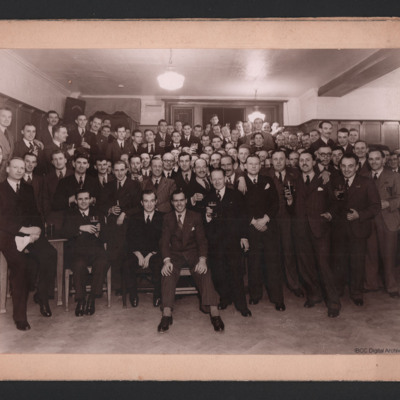 A large group of men wearing suit and tie sitting and standing in a room. On the reverse '50 Squadron reunion, Fred below man with glass - diagram showing position of Leslie'. 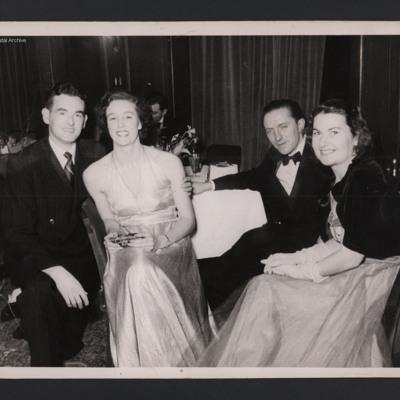 A large group of airmen 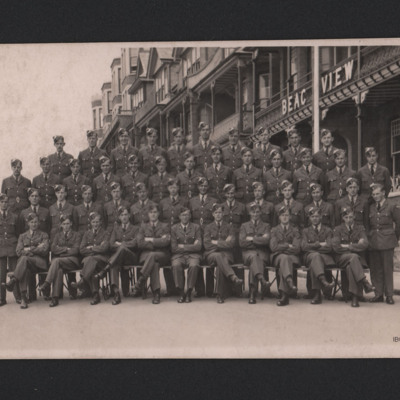 Fifty-eight RAF personnel sitting and standing in four rows, 56 with cadet side caps, outside of a multi-story building with a sign reading; 'Beac[h] View'. 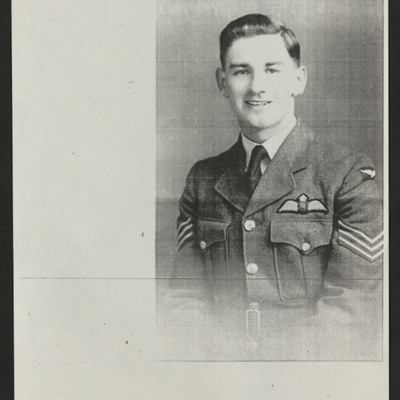 Half-length portrait of a man wearing tunic with pilot's brevet. 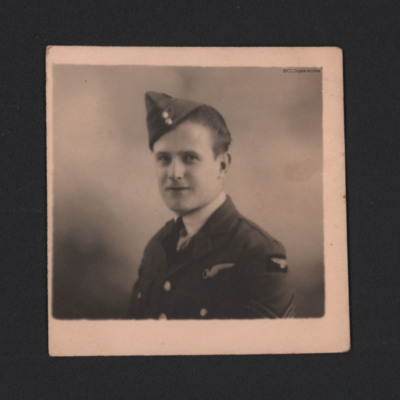 Head and shoulders portrait of a sergeant wearing uniform tunic with observers brevet and side cap. 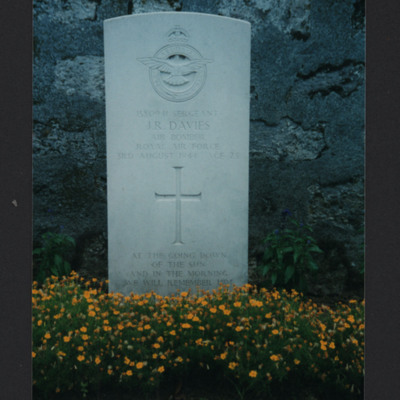 Headstone for Sergeant J R Davies 3rd August 1944. In the background a stone wall. On the reverse a note 'Taken 3/8 anniversary of death, CWGC Headstone'. 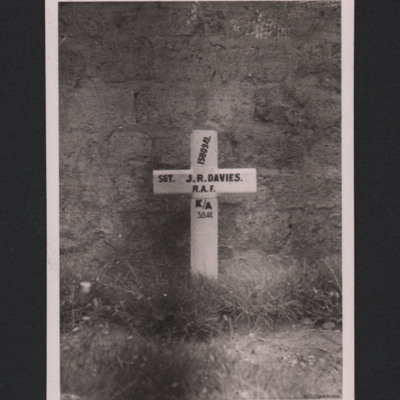 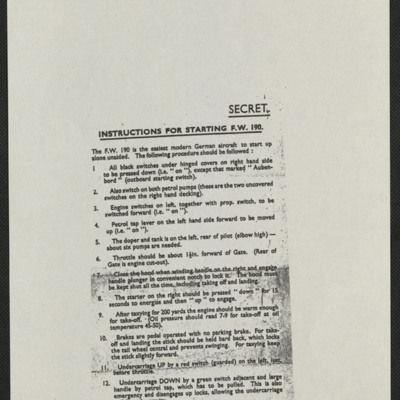 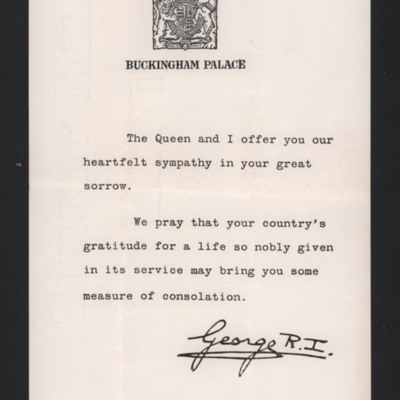 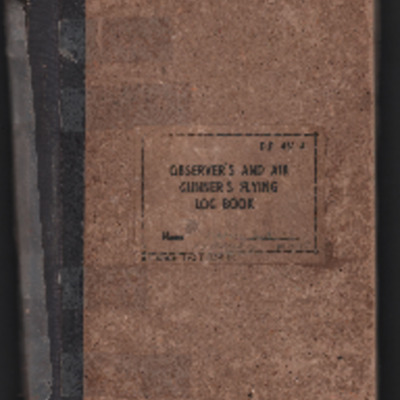