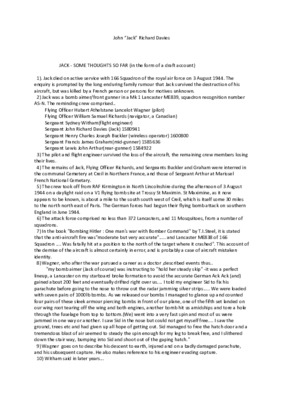 Draft comments on last operation of John Davies. Died on active service with 166 Squadron. List crew of his Lancaster (pilot and flight engineer survived) and recounts operation to V1 site at Trossy St Maximin in which and other crew John were killed. Mentions that Jack's aircraft was hit by bombs of another aircraft and comments on his chances of survival as bomb aimer. Questions reliability of witness accounts Offers several other accounts of subsequent events. Suggests Jack was killed after he bailed out.