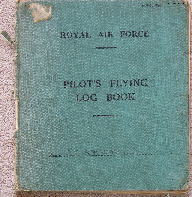 Pilot’s flying log book for D A Robinson, covering the period from 23 November 1942 to 21 may 1948. Covering his flying training, operations flown and instructor duties. It states in his log book that his previous one was lost due to enemy action but includes detail of his training establishments. He was stationed at RAF Bulawayo, RAF Mount Hampden, RAF Grantham, RAF Shawbury, RAF Condover, RAF Stradishall, RAF Wymeswold, RAF Castle Donington, RAF Marston Moor, RAF Lissett, RAF Little Rissington, RAF Wing and RAF Moreton-in-Marsh. He was a prisoner of war from 29 January 1944 to 2 May 1945. Aircraft flown in were Tiger Moth, Oxford, Wellington, Halifax, Lancaster and Anson. He flew a total of 17 operations with 158 Squadron, being reported missing on his last operation. Targets were Hamburg, Essen, Mannheim, Milan, Rheydt, Berlin, Kassel, Dusseldorf, Cannes, Ludwigshafen, Frankfurt and Magdeburg.