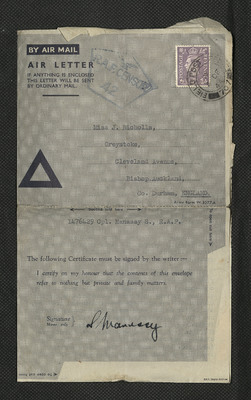 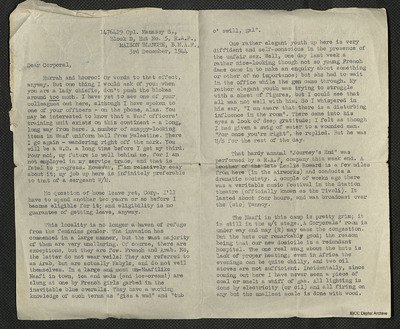 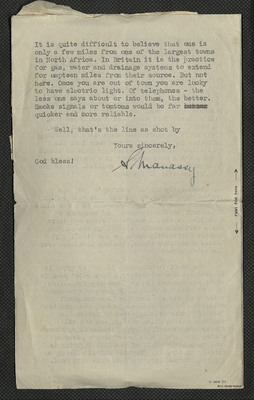 Letter from a Womwn's Auxilliary Air Force friend or colleague stationed at Maison Blanche in Algeria. Catching up with news and writing of her experiences in North Africa. She talks of other service woman as well as local people. She mentions her work and recent entertainment. Goes on to describe local NAAFI in unflattering term as well as conditions in their location just outside Algiers.

[postage stamp]
[date stamp]
[RAF censor stamp]
BY AIR MAIL
AIR LETTER
IF ANYTHING IS ENCLOSED THIS LETTER WILL BE SENT BY ORDINARY MAIL.
Miss J. Nicholls,
Greystoke,
Cleveland Avenue,
Bishop Auckland,
Co. Durham, [underlined] ENGLAND [/underlined]
1476429 Cpl. Manassy S., R.A.F.
The following Certificate must be signed by the writer:-
I certify on my honour that the contents of this envelope refer to nothing but private and family matters.
Signature Name only [signature]
[page break]
1476429 Cpl. Manassy S.,
Block D, Hut No. 5, R.A.F.,
MAISON BLANCHE, B.N.A.F.,
3rd December, 1944
Dear Corporal,
Hurrah and hooroo! Or words to that effect, anyway. But one thing I would ask of you: when you are a lady chiefie, don’t push the blokes around [underlined] too [/underlined] much. I have yet to see one of your colleagues out here, although I have spoken to one of your officers – on the phone, alas. You may be interested to know that a Waaf officers’ training unit exists on this continent – a long, long way from here. A number of snappy-looking items in Waaf uniform hail from Palestine. There I go again – wandering right off the mark. You will be a W.O. a long time before I get my third. Pour moi, my future is well behind me, for I am not employed in my service trade, and that is fatal to progress. However, I am relatively easy about it; my job up here is infinitely preferable to that of a sergeant W/M.
No question of home leave yet, Corp. I’ll have to spend another two years or so before I become eligible for it; and eligibility is no guarantee of getting leave, anyway.
This locality is no longer a haven of refuge from the feminine gender. The invasion has commenced in a large manner, but the vast majority of them are very unalluring. Of course, there are exceptions, but they are few. French and Arab. No, the latter do not wear veils! They are referred to as Arab, but are actually Kabyle, and do not veil themselves. In a large and most un-Naafilike Naafi in town, tea and wads (and ice-cream!) are slung at one by French girls garbed in the inevitable blue overalls. They have a working knowledge of such terms as “giss a wad” and “tub”
[page break]
o’ swill, gal”.
One rather elegant youth up here is very diffident and self-conscious in the presence of the unfair sex. Well, one day last week a rather nice-looking though not so young French dame came in to make an enquiry about something or other of no importance; but she had to wait in the office while the gen came through. My rather elegant youth was trying to struggle with a sheet of figures, but I could see that all was not well with him. So I whispered in his ear, “I am aware that there is a disturbing influence in the room”. There came into his eyes a look of deep gratitude; I felt as though I had given a swig of water to a wounded man. “For once you’re right”, he replied. But he was U/S for the rest of the day.
That hardy annual “Journey’s End” was performed by a R.A.F. company this week end. A brother of the late Leslie Howard is a few miles from here (in the airworks) and conducts a dramatic society. A couple of weeks ago there was a veritable music festival in the Station theatre (officially known as the Tivoli). It lasted about four hours, and was broadcast over the (sic) Tannoy.
The Naafi in this camp is pretty grim; it is still in the u/t stage. A Corporals’ room is under way and may (R) may ease the congestion. But the huts our [sic] remarkably good; the reason being that our new domicile is a redundant hospital. The one real snag about the huts is lack of proper heating; even in Africa the evenings can be quite chilly, and two oil stoves are not sufficient. Incidentally, since coming out here I have never seen a piece of coal or smelt a whiff of gas. All lighting is done by electricity (or oil) and all firing on any but the smallest scale is done with wood.
[page break]
It is quite difficult to believe that one is only a few miles from one of the largest towns in North Africa. In Britain it is the practice for gas, water and drainage systems to extend for umpteen miles from their source. But not here. Once you are out of town you are lucky to have electric light. Of telephones – the less one says about or into them, the better. Smoke signals or tomtoms would be far [deleted] better [/deleted] quicker and more reliable.
Well, that’s the line as shot by
Yours sincerely,
[signature]
God bless!