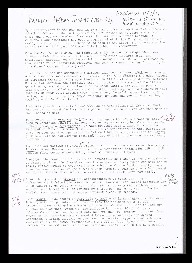 He describes his first interest in the RAF, in 1938. He joined the Air Defence Cadet Corps, and later in 1941 the Air Training Corps. He was called up by the RAF in February 1942, and proceeded through initial training and the Initial Training Wing at Aberystwyth. Here he was promoted to leading aircraftsman. Having failed his pilots course, he was subsequently sent to Moncton Canada in late November 1942. Following a number of postings including bombing and gunnery school and navigation he was shipped home on the Aquitania back to the UK in December 1943. In early 1944 he was posted to Wigtown to train as a bomb aimer. He reported to 8 Operational Training Unit in late May 1944 where he crewed up. After flying in Wellingtons he passed through the Heavy Conversion Unit at RAF Sandtoft and the Lancaster Fininshing School at RAF Hemswell. He joined 166 Squadron, his flight forming 153 Squadron, which moved to Scampton, and on 31st October 1944 carried out his first raid on Cologne. He continued on operations including the raid on Dresden on 13th February 1945. On completion of his tour he trained as an equipment officer. He was released by the RAF in July 1946 and returned to his job with Cornwall County Council, He eventually moved to Morpeth in Northumberland and maintained his links with the 153 Squadron Association.