A Rather Strange Time 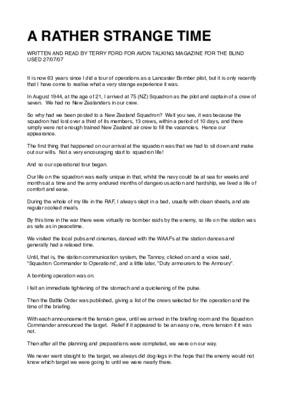 A Rather Strange Time

[bold] A RATHER STRANGE TIME [/bold]
WRITTEN AND READ BY TERRY FORD FOR AVON TALKING MAGAZINE FOR THE BLIND USED 27/07/07
It is now 63 years since I did a tour of operations as a Lancaster Bomber pilot, but it is only recently that I have come to realise what a very strange experience it was.
In August 1944, at the age of 21, I arrived at 75 (NZ) Squadron as the pilot and captain of a crew of seven. We had no New Zealanders in our crew.
So why had we been posted to a New Zealand Squadron? Well you see, it was because the squadron had lost over a third of its members, 13 crews, within a period of 10 days, and there simply were not enough trained New Zealand air crews to fill the vacancies. Hence our appearance.
The first thing that happened on our arrival at the squadron was that we had to sit down and make out our wills. Not a very encouraging start to squadron life!
And so our operational tour began.
Our life on the squadron was really unique in that, whilst the navy could be at sea for weeks and months at a time and the army endured months of dangerous action and hardship, we lived a life of comfort and ease.
During the whole of my life in the RAF, I always slept in a bed, usually with clean sheets, and ate regular cooked meals.

By this time in the war there were virtually no bomber raids by the enemy, so life on the station was as safe as peacetime.
We visited the local pubs and cinemas, danced with the WAAFs at the station dances and generally had a relaxed time.
Until, that is, the station communication system, the Tannoy, clicked on and a voice said “Squadron Commander to Operations”, and a little later, “Duty armourers to the Armoury”.
A bombing operation was on.
I felt an immediate tightening of the stomach and a quickening of the pulse.
Then the Battle Order was published, giving a list of the crews selected for the operation and the time of the briefing.
With each announcement the tension grew, until we arrived in the briefing room and the Squadron Commander announced the target. Relief if it appeared to be an easy one, more tension if it was not.
Then after all the planning and preparations were completed, we were on our way.
We never went straight to the target, we always did dog-legs in the hope that the enemy would not know which target we are going to until we were nearly there.
[page break]
I concentrated solely on the course I was flying on each leg, and then on the target as we arrived.
Attention was always on the immediate present, never the future. This applied to our life in general.
Unlikely though it may seem, in spite of the number of casualties we had, I never saw a dead or wounded man. Although we were only too well aware of the numbers of comrades who were being killed or wounded, we never saw them.
We also had a very casual attitude to those friends who were killed or missing.
The war had been going on for five years and so many friends had died that it had just become a sort of routine. So when a good friend on the squadron was killed or missing, it was just “Bad luck pal” and we might try to grab something of his before the snatch squad took away his possessions for safe keeping.
We never thought about the loved ones we had left behind. I never heard any of my companions giving a thought to how their parents would feel if they were killed, nor did I think about it myself.
There was always a varying amount of tension, strain and excitement during an operation, but I only remember two occasions of real, deep fear.
The first was during a daylight raid on Eindhoven airfield.
For reasons I won’t go into, we were late arriving. The rest of the squadron had already bombed and departed, as had the escorting fighter, so we were left to bomb on our own.
As we turned for home, I suddenly say two single-engined fighters in the distance, heading towards us, and I knew that if they were German ME 109s we had had it.
It was then that I felt real fear, but suddenly for whatever reason, the planes veered off and disappeared and my fear went with them.
The second time was another daylight raid, this time on Duisburg in the Ruhr – Happy Valley, with the heaviest flack in the world.
As we arrived at Duisburg and turned onto our final course, the flak in front of us was so heave that the smoke formed a completely solid blank wall, with red flashed inside as the flak burst and with Lancasters tumbling out of the blackness as they were hit.
It seemed as though we were about to fly into hell itself and my mouth went completely dry.
This was just for a few seconds and as we settled into our bombing run, I was so concentrating on the bomb-aimer’s instructions and accurate flying that I forgot my fear and we got through safely.
Another extraordinary experience was a mining trip to the Baltic at night.
On mining trips we flew entirely along and although there was no flak, these trips were long and very dangerous.
From England we crossed the North Sea and Denmark and then did a timed run from a designated island to drop our mines.
It was on that run I thought, “How strange is this. Here we are, hundreds of miles from home, with the ice cold Baltic Sea beneath us, with enemy Germany to the South, Norway and Sweden to

The North and cut off to the West by Denmark, where enemy fighters will be waiting for us as we return, and yet here I am, snug, warm and comfortable in our aircraft, feeling quite at ease.
We made it back safely of course and life continued as before. Days of comfort and ease, interspersed with hours of acute danger and strain.
The number of trips flown grew until the relief of completing our 35th and last operation.
And so I say goodbye to the crew and proceeding to an Operational Training Unit, which was not entirely without danger, but where the sound of the Tannoy no longer brought me that tightening of the stomach and quickening of the heartbeat.