Letter from Terry Ford to his parents 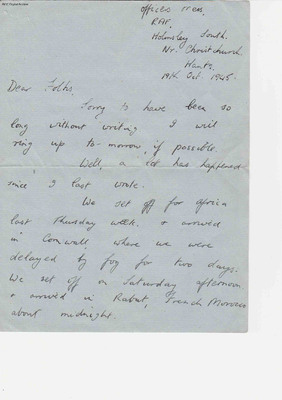 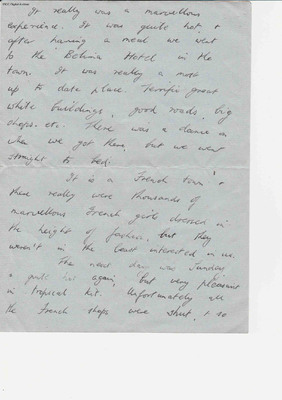 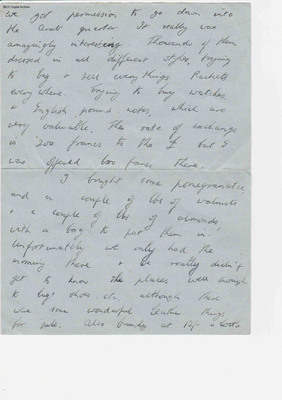 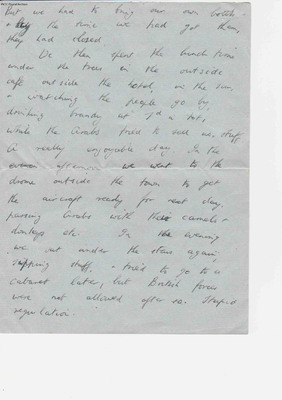 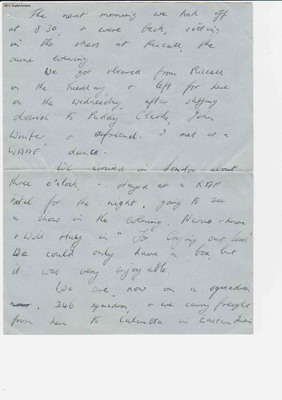 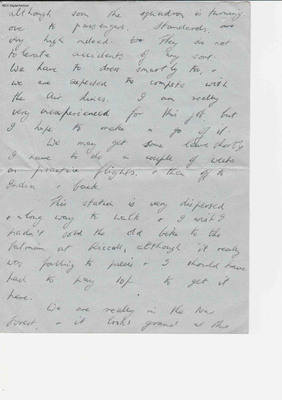 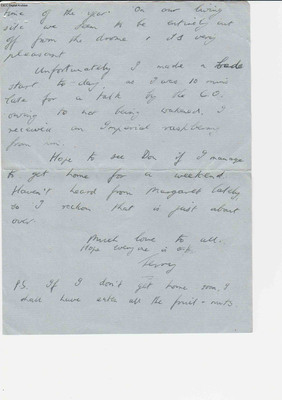 Letter from Terry Ford to his parents

Sorry to have been so long without writing. I will ring up to-morrow, if possible.
Well, a lot has happened since I last wrote.

We set off for Africa last Thursday week, & arrived in Cornwall, where we were delayed by fog for two days. We set off on Saturday afternoon, & arrived in Rabat, French Morocco about midnight.

It really was a marvellous experience. It was quite hot, & after having a meal we went to the Belima Hotel in the town. It was really a most up to date place. Terrific great white buildings, good roads, big shops, etc. There was a dance on when we got there, but we went straight to bed.

It is a French Town & there really were thousands of marvellous French girls dressed in the height of fashion, but they weren’t in the least interested in us.

The next day was Sunday & quite hot again, but very pleasant in tropical kit. Unfortunately all the French shops were shut, & so

we got permission to go down into the Arab quarter It really was amazingly interesting. Thousands of them dressed in all different styles, trying to buy & sell everythings [sic]. Rackets everywhere. Trying to buy watches, & English pound notes, which are very valuable. The rate of exchange is 200 francs to the £ but I was offered 600 francs there.

Unfortunately we only had the morning there & we really didn’t get to know the places well enough to buy shoes etc, although there were some wonderful leather things for sale. Also brandy at 12/- a bottle

but we had to bring our own bottle & by the time we had got them, they had closed.

We then spent the lunch time under the trees in the outside café outside the hotel, in the sun, & watching the people go by, drinking brandy at 7d a tot, while Arabs tried to sell us stuff. A really enjoyable day. In the [deleted] evenin [/deleted] afternoon we went to the drome outside the town to get the aircraft ready for next day, passing Arabs with their camels & donkeys etc. In the evening we sat under the stars again, sipping stuff, & tried to go to a cabaret later, but British forces were not allowed after 10. Stupid regulation.

The next morning we took off at 8.30, & were back, sitting in the mess at Riccall, the same evening.

We got cleared from Riccall on the Tuesday, & left for here on the Wednesday, after saying cheerio to Paddy Clarke, John Winter, & a friend I met at a WAAF dance.

We arrived in London about three o’clock, - stayed at a RAF hotel for the night, going to see a show in the evening. Nervo & Knox & Will Hay in “For crying out loud.” We could only have a box, but it was very enjoyable.

We are now on a squadron [deleted] now [/deleted], 246 squadron, & we carry freight from here to Calcutta in Eastern India

although soon the squadron is turning over to passengers. Standards are very high indeed. [deleted] We [/deleted] They do not tolerate accidents of any sort. We have to dress smartly too, & we are expected to compete with the Air Lines. I am really very inexperienced for this job, but I hope to make a go of it.

We may get some leave shortly I have to do a couple of weeks on practice flights, & then off to India & back.

This station is very dispersed & a long way to walk & I wish I hadn’t sold the old bike to the fat man at Riccall, although it really was falling to pieces & I should have had to pay 10/- to get it here.

We are really in the New Forest, & it looks grand at this

time of the year. On our living site we seem to be entirely cut off from the drome & its very pleasant

Unfortunately I made a bad start to-day, as I was 10 mins late for a talk by the C.O. owing to not being wakened. I received an Imperial raspberry from him.

Hope to see Don if I manage to get home for a weekend.

Haven’t heard from Margaret lately, so I reckon that is just about over.

Much love to all.

Hope everyone is O.K.

P.S. If I don’t get home soon, I shall have eaten all the fruit & nuts.