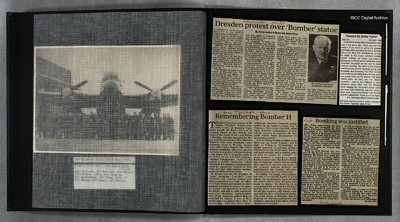 Item 1 refers to a protest from Dresden over a statue to Sir Arthur Harris.
Item 2 is a letter thanking Sir Arthur Harris from a couple bombed out of their home in Liverpool.
Item 3 is an article titled 'Remembering Bomber H'.
Item 4 is a letter from Group Captain Lord Cheshire arguing the bombing was justified.

DRESDEN’S Lord Mayor appealed to the British Ambassador to Germany yesterday to press for the scrapping of plans to erect a statue in London of Sir Arthur “Bomber” Harris, who masterminded wartime air raids.
Officials in other German cities which suffered bomb damage have also protested at plans to put up the statue in the Strand next year.
A spokesman for the German Foreign Ministry said it had “no position” on the honouring of a man known in Germany as “Butcher Harris”, and did not wish to become involved.
Herr Herbert Wagner, Lord Mayor of Dresden, said the memorial did not belong in the Europe of 1992. “I do not wish to mitigate Germany’s war guilt, but Harris’s carpet bombing against civilians was not militarily justifiable.”
He said that on Sir Arthur’s orders, Dresden, Würzburg and Pforzheim, bombed in the last months of the war, were turned into “skeleton cities”, with the loss of 35,000 lives over two nights in Dresden, and 20,000 lives over several days in Pforzheim.
A campaign to lobby the British Embassy was started by the mayors of Würzburg and Pforzheim, who appealed in letters to Sir Christopher Mallaby, British Ambassador, to help stop the erection of the memorial “in the name of countless victims of bombing attacks against civilians”.
The £100,000 statue was commissioned by the Bomber Command Association, and the money raised by its members and those of the RAF Air Crew Association. It is to be unveiled by the Queen Mother next May and will stand opposite an existing statue of Lord Dowding, wartime commander of Fighter Command, outside the RAF Church, St Clement Danes.
Group Captain Ken Batchelor, 77, chairman of the Bomber Command Association, which has 7,500 members, said yesterday: “Quite frankly, why does Dresden think they were the only people bombed during the war? What about our own towns and cities, such as Coventry?
“It is sheer ignorance to suggest that this is honouring retaliation. We are not erecting this statue to glorify war, for the members of our association are the ones who never want to see war again.
“It was not a question of retaliation. The Ruhr was full of armaments and industry from one end to another, and we had to bomb urban areas, with Dresden as the focal point, to destroy the German war potential. We were fighting for our survival.”
Gp Capt Batchelor said the erection of a statue of Sir Arthur was “long overdue”. It was intended to be a memorial to the 55,000 air crew of Bomber Command who died.
He added: “We regarded Sir Arthur as a forthright commander, who was carrying out the orders of the British War Cabinet. We want this memorial to him because the post-war government denied him his peerage, and we were denied our campaign medal.”

I would like to say what should have been said many years ago. Thank you from the bottom of my heart for giving me courage and hope after we had suffered the devastation of the ‘May Blitz. Bombed out, no light or water in the house, windows broken, shelter useless, our family evacuated to Blackpool but there was no telephone out of Liverpool, no postal service and no direct railways working. We went to the Cinema and heard you on the newsreel giving your sympathy and promising that what we had had would be as a little zephyr to that which you would inflict on the enemy. The tears rained down my face and my despair vanished, I said to my husband, at least someone cares. After that my courage never flagged. Mr. Churchill’s blood, sweat and tears didn’t affect me, but your words I have never forgotten although I am now 83 and my husband 84. Thank you once again.

Ed: Such was the boost to civilian morale in the darker, hopeless days of war.

THE PLAN to erect a statue of Sir Arthur “Bomber” Harris, wartime C-in-C of Bomber Command, outside the RAF church of St Clement Danes in the Strand has incurred the wrath of the Lord Mayor of Dresden, who has appealed for the project to be abandoned. Herr Herbert Wagner’s view may command some sympathy even in Britain, among those who today regard the RAF’s strategic bombing offensive against Germany as a serious blunder or even a war crime. Yet it would be ironic if Sir Arthur, by any standards a notable wartime commander, were to be denied a public memorial, while Whitehall, for instance, remains dominated by equestrian statues of Earl Haig and that 19th-century military booby the Duke of Cambridge.
Sir Arthur was not the architect of “area” bombing. Churchill, Lord Cherwell, Sir Charles Portal and others embarked upon the air offensive when Britain possessed no other means of carrying the war to Germany. Sir Arthur was appointed to execute the policy, and did so with extraordinary, even obsessive, single-mindedness. If his superiors judged that he exceeded his orders, it was in their power, and was indeed their duty, to remove him. This was never done.

Although Dresden featured prominently on Sir Arthur’s target lists in February 1945, it was Churchill, rather than Bomber Command’s C-in-C, whose concern to impress the Russians before Yalta precipitated the devastating attack.
Just as killing British civilians in the Blitz did not break Britain’s will to fight, so killing or “de-housing” far larger numbers of German civilians did not break that of Germany. But it is not good enough, half a century later, to seek to equate, for example, the mass murders in Germany’s concentration camps with the RAF’s bombing of Germany. There was no doubt then, and there remains none today, of the strategic military purpose that underpinned the bomber offensive, however uncertain its achievement.
Sir Arthur was tough, even ruthless; but also a formidable leader of great forces. He passionately believed that his men’s efforts were bringing Germany to defeat. He deserves to be commemorated, not least for the satisfaction of his surviving aircrew, who revere his memory, and whose courage and sacrifice were beyond praise. The Lord Mayor of Dresden may be forgiven for uttering sentiments that might be expected of his office. But he should not be heeded.

SIR – While appreciating the feelings that have prompted the Lord Mayor of Dresden to call for the plans for a statue of Air Chief Marshal Sir Arthur Harris to be dropped (report, Oct. 1), I am afraid that he does not realise the context in which the bombing offensive was launched.
The decision was a political one made by the War Cabinet and backed by the Americans. Without it there would have been no re-entry into Europe in 1944.
Back in 1940 Europe was conquered. The British Army had been defeated. The Royal Navy could only just keep the crucial Atlantic lifeline open; it could not conceivably blockade Germany which, with access to all the raw materials he wanted, Hitler was building into an impregnable fortress. The war had to be carried to Germany, and the bomber was the only means available.
As a result of the vast quantity of resources and manpower diverted to the defence of Germany – 900,000 men for searchlights and ack-ack alone – it acted as the equivalent of a second front from 1941. Most important of all, together with the U.S. 8th Air Force, the bomber offensive forced the Luftwaffe to come up and fight – leading to its final defeat.
When the Normandy invasion began, there was not one German aircraft over the beach. Had their bombers been there, I doubt it would have succeeded.
Of the 55 million lives lost in the war, 35 million were those of civilians. The bomber offensive accounted for about 500,000. Every day that the war lasted, an average of 10,000 innocent men, women and children were exterminated by Hitler in his concentration camps; and as it progressed, that extermination programme accelerated, a very different story from Dunkirk.
Inevitably, in a life and death struggle of such magnitude, mistakes are made. One of them, in my view, was Dresden. But it was a mistake made in good faith, because it was based on intelligence reports, some of which proved to be false. The city lay only 50 miles from the advancing Russians, who had asked for maximum bombing along the whole line.
At the same time the appearance of the German jet Me.262 signalled to us that the tide of the air war could be turned if it were produced in large numbers, and brought an added sense of urgency to finish the war as quickly as possible, in Germany’s true interests as well as that of the Allies. Had we not returned to Europe in June 1944, I shudder to think what would have been.
All the same, everyone in Bomber Command regrets the mistakes and wishes, to this day, that some other means of prising open Fortress Europe could have been found.