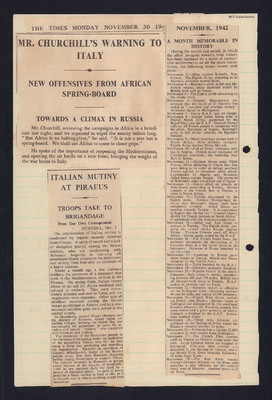 TOWARDS A CLIMAX IN RUSSIA

Mr. Churchill, reviewing the campaigns in Africa in a broadcast last night, said we expected to expel the enemy before long. “But Africa is no halting-place,” he said. “It is not a seat but a spring-board. We shall use Africa to come to closer grips.”

He spoke of the importance of reopening the Mediterranean, and opening the air battle on a new front, bringing the weight of the war home to Italy.

From Our Own Correspondent

The deterioration of Italian morale is confirmed by reports recently received from Greece. A spirit of revolt and a lack of discipline prevail among the Italian soldiers, who are cooperating with Albanian brigands in carrying off prominent Greek citizens to the mountains and setting them free only on payment of a heavy ransom.

About a month ago a few German soldiers, the survivors of a transport ship sunk in the Mediterranean, arrived at the Piraeus. On seeing them, Italian troops about to set sail for Africa mutinied and refused to embark. They were immediately arrested and sent to Tatoi, and the ringleaders were executed. Other acts of rebellion occurred among the Italian troops garrisoned in Athens, and as a consequence machine-guns were posted in the central streets.

In Macedonia, around Mount Olympus and the districts of Elassona, Greek bands are raiding villages, hoisting the Greek flag and encouraging the population to resist the invaders and punish “traitors” who cooperate with Germans and Italians.

The resistance of the Rumanian people to the Germans is increasing under the leadership of the mysterious Vlaicu, who for the time being is lying low, perfecting and extending his organization. Recently an aeroplane of General Mihailovitch, leader of the Serbian patriot army, flew over Rumania dropping leaflets urging Rumanians to support Vlaicu. The internal situation in Rumania is getting worse because of the scarcity of foodstuffs; 1,000 lei are required daily for food by a person of moderate needs. In spite of heavy penalties a black market in food is rife, as it is the only way to obtain anything except bare necessities.

A MONTH MEMORABLE IN HISTORY

During the month just ended, in which the allies’ progress towards final victory has been hastened by a series of memorable achievements on all the main battle-fronts, the following major events took place:-

NOVEMBER 5. – The Eighth Army advancing on the whole front.

NOVEMBER 6. – General Montgomery announces that the battle of El Alamein has ended in “complete and absolute victory.” Armistice signed in Madagascar.

NOVEMBER 8. – United States forces land in French North Africa, supported by the Royal Navy and the R.A.F. General Giraud calls on all French people to cooperate with the allies. Surrender of Algiers. Rommel’s army in full retreat towards the Egyptian frontier.

NOVEMBER 11. – German forces enter Vichy France, Hitler declaring to Pétain that they were doing so in order to defend southern France against an imminent allied attack Capitulation of Algeria and Morocco. Allied forces occupy Bougie. The remnants of Rommel’s army are driven out of Egypt.

NOVEMBER 13. – Tobruk recaptured by the Eighth Army. General Montgomery declares that Rommel’s forces have been completely crippled. Allied forces advancing towards Tunisia. It is announced in Algiers that Darlan has “resumed responsibility for French interests in North Africa,” in agreement with the American authorities.

NOVEMBER 16. – The United States Navy Department announces the destruction of 23 Japanese ships in a big naval battle in the Solomons. Japanese in Papua hemmed in on the coast.

NOVEMBER 17. – Landings by British parachute troops in Tunisia. Mekili and Derna occupied by the Eighth Army.

NOVEMBER 20. – Russian victory in the central Caucasus; Axis forces in retreat, abandoning between 100 and 150 tanks. British beat off German tank force in Tunisia. R.A.F. makes its heaviest raid on Turin.

NOVEMBER 22. – Russians launch an offensive on the Stalingrad front, advancing between 40 and 50 miles and taking 13,000 prisoners.

NOVEMBER 23. – French West Africa, including Dakar, joins Darlan. German forces at Stalingrad are endangered by the continued Russian advance; the Russians capture five more towns and a great quantity of booty. Stuttgart is bombed by the R.A.F. Australians capture Gona.

NOVEMBER 24. – Three Axis divisions are captured on the Stalingrad front, where the Russians advance another 25 miles.

NOVEMBER 26. – Germans lose a further 12,000 prisoners in their retreat from Stalingrad.

NOVEMBER 27. – The French Fleet scuttles itself at Toulon as Hitler’s troops enter the port. Large German forces are trapped at Stalingrad. Fifty-one Axis aircraft are destroyed in the fighting in Tunisia, where the British First Army occupied Tebourba, 15 miles from Tunis.

NOVEMBER 29. – The Red Army breaks through German defences on the Don, and launches a new offensive on the central front, west of Moscow. Another heavy raid on Turin.