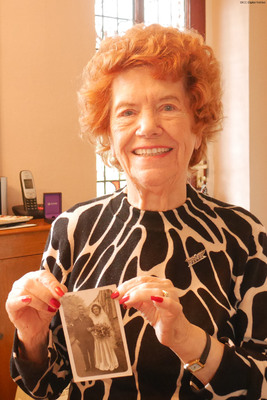 Lillian Grundy was born grew up in Ancoats, Manchester. Upon leaving school, she worked in a local mill winding bobbins, and the Hall Brothers Toffee Works wrapping sweets. Grundy met George in 1939 and they were engaged in Easter 1940, however, he was captured during Dunkirk and taken to a prisoner of war camp, where he remained until 1945. In 1941 she was called up to work at the Avro factory, where she made screws for Manchester and Lancaster aircraft until November 1945. She describes working for twelve-hours, six days a week, rotating night and day shifts monthly, and recalls the uncomfortable conditions of the factory. Despite the long hours, she notes the good wage, receiving a bonus for hard work, and going dancing with her friends and American servicemen on their days off. She also recollects her emotions upon learning of D-Day during a night-shift and joining hands with her colleagues to pray and sing. Grundy also describes her surprise reunion with George in May 1945, their marriage the following month, and his recuperation before moving into their first home in 1946.