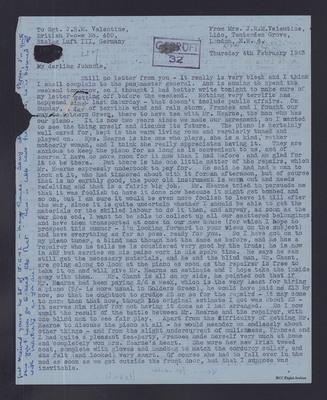 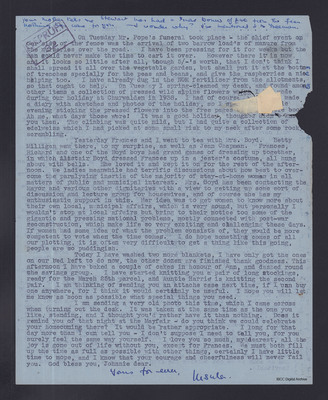 Writes of recent bad weather and her activities and stories about their piano and whether to repair it, Asks about his perspective on getting a new house. Continues with local news and her and daughter's activities. Concludes with domestic matters and that she is sending an old photograph of her that she has found.

Still no letter from you – it really is very bleak and I think I shall complain to the postmaster general. Ann is coming to spend the weekend tomorrow, so I thought I had better write tonight to make sure of my letter getting off before the weekend. Nothing very terrific has happened since last Saturday – that doesn’t include public affairs. On Sunday, a day of terrible wind and rain storm, Frances and I fought our way to Golders Green, there to have tea with Mr. Hearne, the man who has our piano. It is now two years since we made our agreement, so I wanted to see the thing myself and discuss its future. The piano is certainly well cared for, kept in the warm living room and regularly tuned and played on. Mrs. Hearne is the one who plays, she is a kind, rather motherly woman, and I think she really appreciates having it. They are anxious to keep the piano for as long as is convenient to us, and of course I have no more room for it now than I had before and am glad for it to be there. But there is the one little matter of the repairs, which Mr. Hearne expressly undertook to pay for. He said he had had a man to look at it, who had tinkered about with it for an afternoon, but of course that is no earthly good, the poor old instrument is worn out and needs refelting [sic] and that is a fairly big job. Mr. Hearne tried to persuade me that it was foolish to have it done now because it might get bombed and so on, but I am sure it would be even more foolish to leave it till after the war, since it is quite uncertain whether I should be able to get the materials or the skilled labour to do it then, and anyway, as soon as the war does end, I want to be able to collect up all our scattered belongings and have them transported at once to our new house (for which I hope to prospect this summer – I’m looking forward to your views on the subject) and have everything as far as poss. Ready for you. So I have got on to my piano tuner, a blind man though not the same as before, and he has a repairer who he tells me is considered very good by the trade; he is now in ARP but carries on his piano work in his spare time. He says he can still get the necessary materials, and he and the blind man, Mr. Chant, are going along to look at the piano as soon as the repairer is free to take it on and will give Mr. Hearne an estimate and I hope take the inside away with them. Mr. Chant is all on my side, he pointed out that if Mr. Hearne had been paying 2/6 a week, which is the very least for hiring a piano (5/- is more usual in Golders Green), he would have paid me £13 by now, so that he oughtnot [sic] to grudge £5 or so for the repairs – it may come to more than that now, though the original estimate I got was about £3 – it serves him right for not having it done as I had arranged. So I now await the result of the battle between Mr. Hearne and the repairer, with one blind man to see fair play. Apart from the difficulty of getting Mr. Hearne to discuss the piano at all – he would meander on endlessly about other things – and from the slight undercurrent of mulishness, Frances and I had quite a pleasant tea-party, Frances made herself very much at home and completely won Mrs. Hearne’s heart. She wore her new Irish tweed coat, complete with gloves and handbag to match the corduroy collar, and she felt (and looked) very smart. Of course she had to fall over in the mud as soon as we got outside the front door, but that I suppose was inevitable.

[inserted] Just received yours No 35 of 15-12-42 - Many thanks. Sorry [missing words] Pepper, I’m [underlined quite [/underlined] sure you’ll never go to seed like that. There is little news [missing words] he is browned off with inactivity as you are! [/inserted]

[inserted] Your mother tells me Stewart has had a Xmas bonus of £40 from the firm nothing has come for you – I wonder why? I’ve mentioned it to Treeman.

[postmark] GEPRÜFT 32 [/postmark]
On Tuesday Mr. Pope’s funeral took place – the chief event on our side of the fence was the arrival of two barrow load’s of manure from the nurseries over the road. I have been pressing for it for weeks but the man could never make the time to cart it over. However there it is now and it looks so little after all, though 5/-‘s worth, that I don’t think I shall spread it all over the vegetable garden, but shall put it at the bottom of trenches specially for the peas and beans, and give the raspberries a nice helping too. I have already dug in the NOM fertiliser from the allotments, so that ought to help. On Tuesday I spring-cleaned my desk, and found among other items a collection of pressed wild alpine flowers which I [missing word] made during our holiday at Churwalden in 1938. I had of course [missing words] made a diary with sketches and photos of the holiday, so I [missing words] evening sticking the pressed flowers into the free pages [missing words] Ah me, what days those were! It was a good holiday, though I didn’t know you then. The climbing was quite mild, but I had quite a collection of edelweiss which I had picked at some small risk to my neck after some rocky scrambling.

Yesterday Frances and I went to tea with Mrs. Boyd. Betty Milligan was there, to my surprise, as well as Jean Chapman. Frances, Richard and one of Boyd boys had grand games of dressing up together, in which Alistair Boyd dressed Frances up in a jester’s costume, all hung about with bells. She loved it and kept it on for the rest of the afternoon. We ladies meanwhile had terrific discussions about how best to overcome the paralysing inertia of the majority of stay-at-home woman in all matters of public and municipal interest. Mrs. Boyd has been contacting the Mayor and various other dignitaries with a view to getting up some sort of discussion and lecture group for housewives, and of course she has my enthusiastic support in this. Her idea was to get women to know more about their own local, municipal affairs, which is very sound, but personally I wouldn’t stop at local affairs but bring to their notice too some of the gigantic and pressing national problems, mostly connected with post-war reconstruction, which make life so very exciting and challenging these days. If women had some idea of what the problem consists of, they would be more competent to vote when the time comes. I do hope something comes of all our plotting, it is often very difficult to get a thing like this going, people are so puddingish [sic]

Today I have washed two more blankets, I have only got the ones on our bed left to do now, the other dozen are finished thank goodness. This afternoon I have baked a couple of cakes in honour of Ann, and dashed round the savings group. I have started knitting you a pair of long stockings, ready for the March 25th parcel, and Auntie Harrie is knitting the second pair. I am thinking of sending toy an attaché case next time, if I can buy one anywhere, for I think it would certainly be useful. I hope you will let me know as soon as possible what special things you need.

I am sending a very old photo this time, which I came across when turning out the desk. It was taken at the same time as the one you like, standing, and I thought you’d rather have it than nothing. Does it remind you of that night at the Mayfair – do you think we could celebrate your homecoming there? It would be rather appropriate. I long for that day more than I can tell you – I don’t suppose I need to tell you, for you surely feel the same way yourself. I love you so much, my dearest, all the joy is gone out of life without you, except for Frances. We must both fill up the time as full as possible with other things, certainly I have little time to mope, and I know that your courage and cheerfulness will never fail you. God bless you, Johnnie dear.

Yours for ever,
Ursula