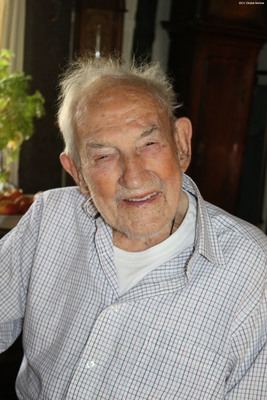 Andrew hitchhiked from Edmonton to Calgary and then on to Mountain View by train. Gunnery training was in a Bolingbroke which had a mid-upper turret; bombing training was done in an Anson. Andrew was then posted to navigation school in Quebec for four or five months. He passed out as a navigator and was then posted to a general reconnaissance school on Prince Edward Island for about six to eight weeks. When commissioned he flew on B-24s - the crew went about halfway to Bermuda on an exercise to find a destroyer. Andrew was sent to Moncton where he awaited being shipped back to Great Britain and eventually posted to RAF Oulton in Norfolk where he joined Bomber Command on 223 Squadron. The crew flew in an Oxford on ‘Big Ben sorties’ up and down the Dutch coast spotting for V-2 rockets. Later they did decoy operations flying out with the main force. Andrew then became a navigator on B-24s. He recalled the time when they flew over Cologne and could hear the enemy’s anti-aircraft fire over the roar of their engine. On another occasion they had a near miss with a Lancaster.