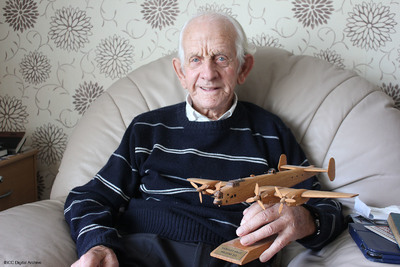 Douglas Smith grew up in Bressingham, Norfolk. He joined the Royal Air Force in October 1940, at the age of nineteen, and trained as a wireless operator. He joined a crew on Wellingtons at No 10 Operational Training Unit, RAF Abingdon, before converting to Halifaxes at 1658 Conversion Unit, RAF Riccall. In April 1943, the crew joined 76 Squadron, based at RAF Linton on Ouse. He describes their first operation to Germany, the danger of searchlights, and visiting Betty’s Bar in York during their downtime. He recounts a trauma that occurred on the 28th of September 1943, when his crew, piloted by Sergeant Hickman, was shot down on an operation to Hannover, while Smith was grounded due to tonsillitis. He continued operations by filling in for crews lacking a wireless operator, including two trips in support of D-Day, and one emergency landing back at base with a full bomb load. In July 1944, Smith moved to 158 Squadron, RAF Lisset, and completed operations to Le Havre, Dusseldorf, and Kiel. He describes his role as the wireless operator, releasing Window through a chute, and an operation to Stuttgart where the crew shot down two night fighters. After completing thirty-three operations, he instructed at 19 Operational Training Unit, RAF Kinloss, before working as a transport officer at RAF Shepherds Grove until demobilisation.