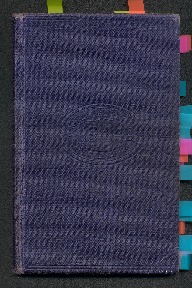 Keith Thompson was a navigator on operations with 101 Squadron, at RAF Ludford Magna flying Lancasters at the start of 1944. He completed his first tour on 31st May, was at 28 OTU from 17th June to 23 July, then 30 OTU as a staff navigator at RAF Hixon flying the Wellington. On 31st Dec 44 he was posted to 1659 HCU at RAF Topcliffe, flying the Halifax. He was commissioned in July.

[bank holidays and significant dates for 1944]

Aluminium & iron or [one indecipherable word] in bicarbonate of soda.

Up at 10 - 0. Started bike. Put spot of paint on here & there. Had din then set too with grease. Got it finished before tea. Empire with family & John & Bill. “Reveille with Beverley” & “City without Men”.

Up at 10 - 15. Fitted bracket on bike had to drill new holes then painted it. Went to S. P & T [inserted] [underlined] shave [/underlined] [/inserted] Brought [sketch of Navigator Brevet] (1/6d) Went up to Gran M’s. Had tea there. Came back & changed trousers. Went to dance with John & Bill (2nd.) Saw Joyce Richardson & Frances Holden. Mum, Dad, P & P came to watch. Pat had a couple of dances with me.

Lads went to same place as the [one indecipherable word] went.

Up at 9 - 15. Went to Nav. section. Had look at logs (last 3 - 2 x Berlin & 1 Stettin.) No parcels. [underlined] Letter from Ma. [/underlined] Lecture on dinghy drill, oxygen & fighter tactics. No more mail. Nice long CHAT? over phone to Amie. Had TEA??!! Then had a wash. Got Betty to take shoes to be mended. Bus in. 2d of chips each & short walk around Louth. “Clive of India”. Bus back. Amie got photos of me and a few kisses.
[underlined] Letter to Ma. [/underlined]

Up at 10 - 0. No battle order. [underlined] Letter from Ma. [/underlined] Dinghy Drill! Bus into Louth. Had tea & toast in TOC - H. with Silva & [one indecipherable word] chap. Went to see “Casablanca” Tres bon. Place rather full. 2d of chips. Had to stand on bus. Silva had to walk!! back.

Had supper then went to WVS. Bill, Bet & Amie there. Got rations from mess.

Up about 8. Bfst. & parade. Air test. Told Silva gen for Amie. Fetched Charlie & put best blue on. Take off late so rang Ma up & told her to tell Amie to met [sic] me at bus stop at 1 - 30. Up 1.45hrs. Just made bus but Amie gone down towards mess. [underlined] No mail but laundry arrived. [/underlined] P.O van into Rasen. Bus to Grimsby then to Cleethorpes. Walked on beach. Coffee & cakes at Grimsby bus stn. Toast & tea in Louth TOC H. Bus back to camp. (9/7d in bus fares!) Had good talk over with Amie.