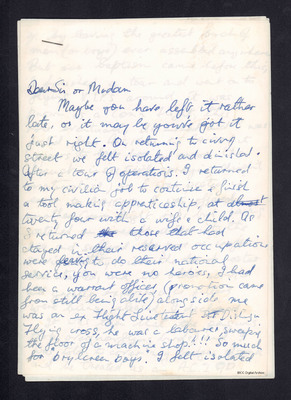 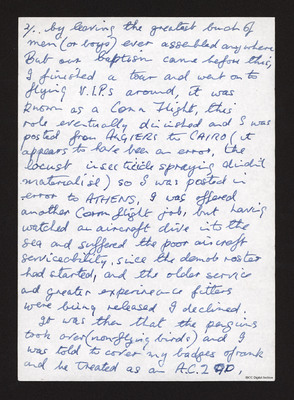 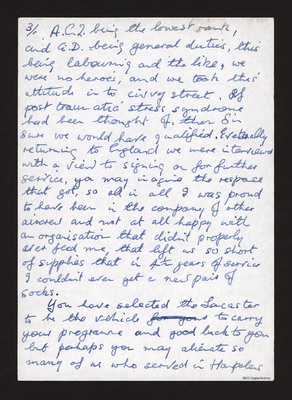 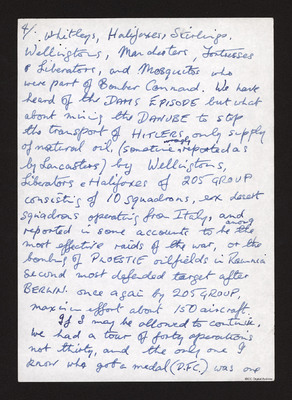 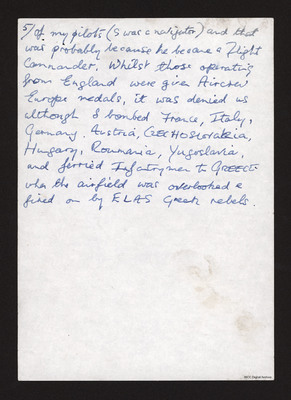 He refers to feeling 'isolated and diminished' when returning to civilian work. He rejoined the Royal Air Force, but the jobs became more menial and supplies and maintenance were poor. He describes the contrast with some of the operations he took part in during the war.

Dear Sir or Madam
Maybe you have left it rather late, or it may be you’ve got it just right. On returning to civvy street we felt isolated and diminished. After a tour of operations I returned to my civilian job to continue & finish a tool making apprenticeship, at [deleted] almost [/deleted] twenty four with a wife & child. As I returned [deleted] the [/deleted] those that had stayed in their reserved occupations were leaving [deleted] going [/deleted] [inserted] leaving [/inserted] to do their national service, you were no hero’es, [sic] I had been a warrant officer, (promotion came from still being alive) alongside me was an ex Flight Liuetenant [sic] [deleted] D.F [/deleted] Distinguished Flying cross, he was a labourer sweeping the floor of a machine shop!!!! So much for “brylcreem boys.” I felt isolated
[page break]
[indecipherable] the greatest bunch of [indecipherable] (or boys) ever assembled anywhere but our baptism came before this; I finished a tour and went on to flying V.I.P.s around, it was known as a Comm Flight, this role eventually diminished and I was posted from ALGIERS to CAIRO (it appears to have been an error, the locust insecticide spraying didn’t materialise) so I was posted in error to ATHENS, I was offered another Comm flight job, but having watched an aircraft dive into the sea and suffered the poor aircraft serviceability, since the demob roster had started, and the older service and greater experience fitters were being released I declined. It was then that the penguins took over (non-flying birds) and I was told to cover my badges of rank and be treated as an A.C.2 GD,
[page break]
[indecipherable] being the lowest rank, G.D. being general duties, this being labouring and the like, we were no heroe’s, [sic] and we took this attitude to civvy street. If post traumatic stress syndrome had been thought of, then I’m sure we would have qualified. Evetually [sic] returning to England we were interviewed with a view for signing on for further service, you may imagine the response that got, so all in all I was proud to have been in the company of other aircrew and not at all happy with an organisation that didn’t properly ever feed me, that left us so short of supplies that in 4 ½ years of service I couldn’t ever get a new pair of socks.
You have selected the Lancaster to be the vehicle [deleted] for your [/deleted] to carry your programme and good luck to you but perhaps you may alienate so many of us who served in the Hampdens.
[page break]
[indecipherable] Halifaxes, Stirlings, [indecipherable] Manchesters, Fortresses & Liberators, and Mosquitos who were part of Bomber Command. We have heard of the DAMS EPISODE but what about mining the DANUBE to stop the transport of HITLERS only supply of natural oil, (sometime [inserted] wrongly [/inserted] reported as by Lancasters) by Wellingtons, Liberators & Halifaxes of 205 GROUP consisting of 10 squadrons, ex desert squadrons operating from Italy, and reported in some accounts to be [inserted] among [/inserted] the most effective raids of the war, or the bombing of PLOESTIE [sic] oilfields in Roumania second most defended target after BERLIN. once again by 205 GROUP, maximum effort about 150 aircraft.
If I may be allowed to continue, we had a tour of forty operations not thirty, and the only one I know who got a medal (D.F C.) was one

[page break]
[indecipherable] (I was a navigator) and that [indecipherable] probably because he became a Flight Commander. Whilst those operating from England were given Aircrew Europe medals, it was denied us although I bombed France, Italy, Germany. Austria, CZECHOSlovakia, Hungary, Roumania, Yugoslavia, and ferried Infantrymen to GREECE when the airfield was overlooked & fired on by ELAS Greek rebels.