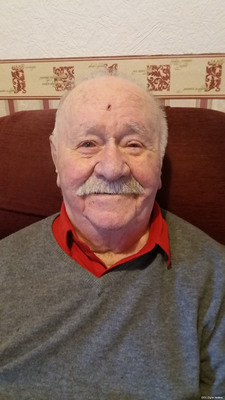 Ken Turnham was born in St Albans and volunteered for the Air Force on his 18th birthday. After his initial training as a wireless operator he was posted to an Operational Training Unit at Lossiemouth. He and his crew were posted to 115 Squadron at RAF Witchford where he completed 29 operations. On an operation to Cologne his aircraft was hit by anti-aircraft fire and he was wounded. He talks about his Pilot Richard (Dick) Briggs - known as 'First back Briggs'. He also discusses jettisoning their bomb load over the sea and the loss of Glen Miller. After the war, Ken worked with the RAF as a release and resettlement Officer. Whilst in Germany he worked in the research team investigating the scene of crashes. During this time he met his wife. After he left the RAF he worked in engineering.