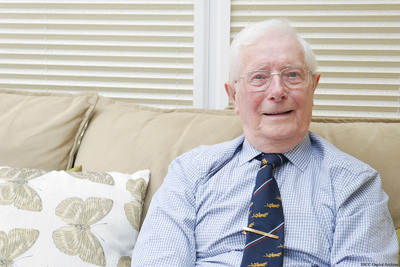 Born on 27 December 1924 in Aigburth Liverpool, James was 15 when war broke out in Europe. He intended to join as a pilot, navigator, bomber aimer in 1943 but due to shorter waiting list and training time he trained to become a wireless operator at RAF Madley. James mentions that he trained in older medium bomber such as Blenheims and Wellingtons, and mentions how he met his regular pilot, Sgt Aedy. He qualified for heavy bombers at RAF Bottesford, on Lancasters, before being assigned to 149 Squadron 'West Indies' at RAF Methwold.
James says that a separate briefing was held for wireless operators to inform them of callsigns and code words to be used before the main briefing. James was also the mid-under gun operator when the aircraft required one. James’ crew only flew four operations over Berlin being near the end of the war; he mentions a mis-identified target incident and an attack by a night fighter. James’ account also details being involved in the Operation Dodge and Operation Manna, as well as recalling a time that he was invited to fly in a Mosquito which he described as ‘a terrific aircraft’. James continue to serve until 1947 until he de-mobilised due to his ‘dislike of a lack of flying’. James retired from active service as a warrant officer. He would work as a delivery driver until retiring in 1997. James recalls that he kept in contact with three members of his crew until 2015.