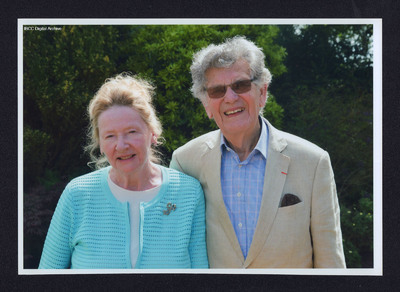 George was born in Chelmsford, Essex. He then moved to Clacton-on-Sea where he went to school before going to a seminary catholic college. When war broke out, he and two other boys aged 15 or 16 ran away from college and went to Ipswich to join the army. George arrived at RAF Honington in July 1940 and stayed there about a year. Bombs were stored in an underground network. After training he joined A Company 70th Battalion for airfield defence, guarding 9 Squadron aircraft at night. 311 Squadron, flying Wellingtons, were later living in tents about five miles from the station. The squadron lost a few aircraft and underwent further training. George recalled the station commander and padre watching the aircraft take off.
George remembered an occasion when aircraft had come back damaged with a badly injured crew. He said the aircrews would touch part of the aircraft for luck before flying. He thought crews were inspiring and would have liked to be transferred to the Royal Air Force. The crew gave him the opportunity to have a flight in a Wellington, which he described. At weekends they would occasionally all go to Bury St Edmunds to a dance. After RAF Honington the unit was transferred to RAF Martlesham Heath on guard duty. They then went to Felixstowe as a battalion. After special training the unit joined the Combined Operations Bombardment Unit 4 which was attached to a warship. Next they did airborne training to go to India and Japan. He was demobbed in India, married and then became a policeman at Ayre. Finally he became Chief of Police for British Transport Police.