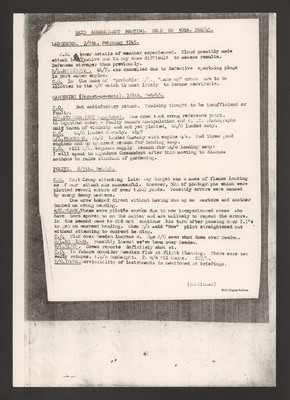 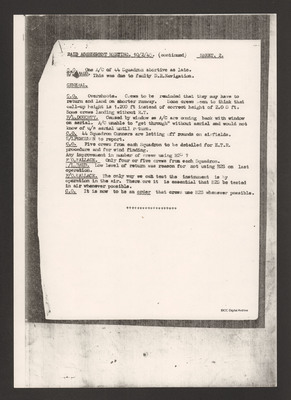 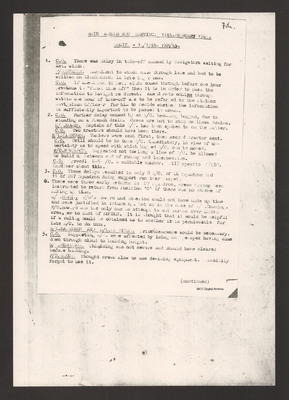 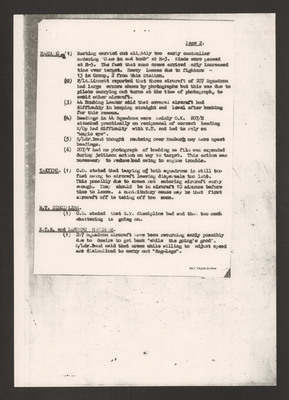 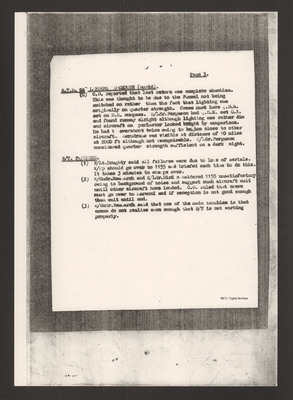 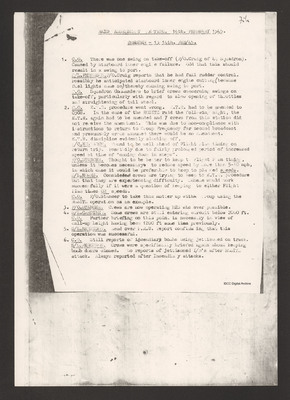 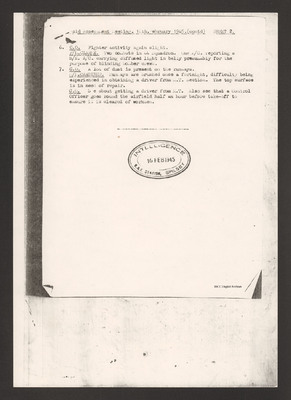 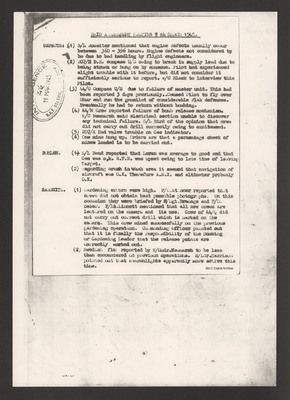 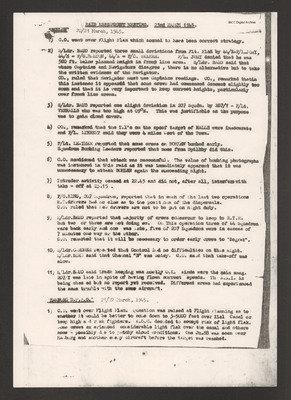 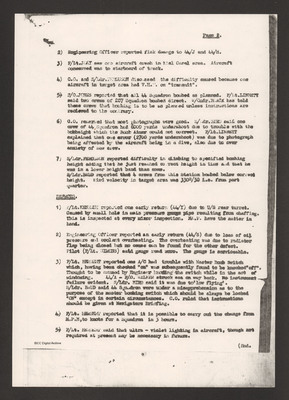 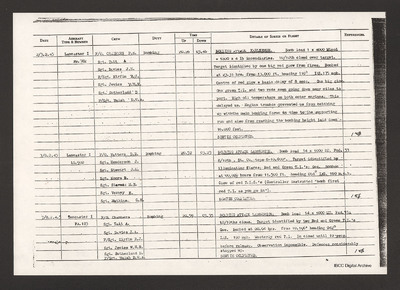 Five 'raid assessments' carried out at RAF Spilsby. Detail of problems encountered in each operation. Final sheet is an extract from Operations Record Book by three different Lancasters.

[underlined] RAID ASSESS )MENT MEETING. HELD ON 10th. FEB/45 [/underlined]
[underlined] LADBERGEN. 7/8th. February 1945. [/underlined]
C.O. [missing letters]over details of weather experienced. Cloud possibly made attack ineffective and in any case difficult to assess results.
Defences stronger than previously.
[underlined] S/L.ROSSIETTER. [/underlined] 44/E. was cancelled due to defective spark-ing plugs in port outer engine.
[underlined] C.O. [/underlined] In the case of “probable” A/C. “made up” crews are to be allotted to the A/C which is most likely to become serviceable.

[underlined] E.R.T. and LANDING PROCEDURE. [/underlined]
(1) 207 Squadron aircraft have been returning early possibly due to desire to get back “while the going’s good”.
S/Ldr.[indecipherable name] said that crews while willing to adjust speed are disinclined to carry out “dog-legs”.
[page break]
[underlined] Page 3. [/underlined]
[underlined] E.R.T. and LANDING PROCEDURE (contd). [/underlined]
(2) C.O. reported that last return was complete shambles. This was thought to be due to0 the Funnel not being switched on rather than the fact that lighting was originally on quarter strength. Crews must have [missing letter].D.M. set on D.R. compass. S/Ldr.Ferguson had [missing letter].D.M. set O.K. and found runway alright although lighting was rather dim and aircraft on [indecipherable word] looked bright by comparison. He had to overshoot twice owing to being too close to other aircraft. Aerodrome was visible at distance of 10 miles at 2000 ft although not recognisable. S/Ldr.Ferguson considered quarter strength sufficient on a dark night.

[underlined] R/T. FAILURES. [/underlined]
(1) F/Lt.Doughty said all failures were due to loss of aerials. W/Op should go over to 1155 and briefed each time to do this. It takes 3 minutes to change over.
(2) W/Cmdr.Newmarsh and S/Ldr.Bird considered 1155 unsatisfactory owing to background of noise and suggest such aircraft wait until other aircraft have landed. C.O. ruled that crews must go over to Marconi and if reception is not good enough then wait until end.
(3) W/Cmdr.Newmarsh said that one of the main troubles is that crews do not realise soon enough that R/T is not working properly.
[page break]
File
[underlined] RAID ASSESSMENT MEETING. 16th. FEBRUARY 1945. [/underlined]
[underlined] DRESDEN – 13/14th. FEB/45 [/underlined]

[inserted] [INTELLIGENCE stamp] [/inserted]
[page break]
[underlined] RAID ASSESSMENT MEETING 9 th MARCH 1945. [/underlined]
DEFECTS: (1) S/L Rossiter mentioned that engine defects usually occur between 360 – 395 hours. Engine defects not considered to be due to bad handling by flight engineers.
[inserted vertically] [INTELLIGENCE stamp] [/inserted vertically]
(2) 207/H D.R. compass U/S owing to break in supply lead due to being struck or hung on by someone. Pilot had experienced slight trouble with it before, but did not consider it sufficiently serious to report. W/C Black to interview this Pilot.
(3) 44/C Compass U/S due to failure of master unit. This had been reported 3 days previously..Caused Pilot to fly over Rhur [sic] and run the gauntlet of considerable Flak defences. Eventually he had to return without bombing.
(4) 44/M Crew reported failure of bomb release mechanism. W/C Newmarsh said electrical section unable to discover any technical failure. S/L Bird of the opinion that crew did not carry out drill correctly owing to excitement.
(5) 207/X Had valve trouble on Gee indicator.
(6) One mine hung up. Orders are that a percentage check of mines loaded is to be carried out.

SASSNITZ. (1) Gardening errors were high. F/O.Stancer reported that crews did not obtain best possible photographs. On this occasion they were briefed by F/Sgt.Bremage and F/O. Baker. F/Lt.Linnett mentioned that all new crews are lectured on the camera and its use. Crew of 44/Q did not carry out correct drill which is marked on the camera. This crew mined successfully on the previous gardening operation. Commanding Officer pointed out that it is finally the responsibility of the Bombing or Gardening Leader that the release points are correctly worked out.
(2) Swedish flak reported by W/Cmdr.Newmarsh to be less than encountered on previous operations. S/Ldr.Harrison pointed out that searchlights apparently more active this time.
[page break]
[underlined] RAID ASSESSMENT MEETING. 23rd MARCH 1945. [/underlined]
[indecipherable word] 20/21 March, 1945.
1) C.O. went over Flight Plan which seemed to have been correct strategy.

2) S/Ldr. BAUD reported three small deviations from Flt. Plan by 44/[indecipherable letter]-F/L.JORY, 44/N – P/O.DALTON, 44/A – F/O. WALKER. F/L. JORY denied that he was 500 ft. below planned height in front line area. S/Ldr. BAUD said that where Captains and Navigators disagree , there is no alternative but to take the written evidence of the Navigator.
CO., ruled that Navigator must use Captains readings. CO., remarked thatin [sic] this instance it appeared that some crews had commenced descent slightly too soon and that it is very important to keep correct heights, particularly over front line areas.

3) S/Ldr. BAUD reported one slight deviation in 207 Squdn. By 207/V – F/Lt. VERRALLS who was too high at 090E. This was justifiable as the purpose was to gain cloud cover.

4) CO., remarked that the T.I’s on the spoof target of HALLE were inaccurate and F/LO. LINNETT said they were 4 miles West of the Town.

5) F/Lt. LEATHER reported that some crews on BOHLEN bombed early. Squadron Bombing Leaders reported that [indecipherable word] from Spilsby did this.

6) C.O. mentioned that attack was successful. The value of bombing photographs was instanced in this raid as it was immediately apparent that it was unnecessary to attack BOHLEN again the succeeding night.

8) F/O.KING, 2078 Squadron, reported that in each of the last two operations M.T.drivers had no clue as to the positions of the dispersals. C.O. ruled that new drivers are not to be put on night duty.

9) S/Ldr.BAUD reported that majority of crews endeavour to keep to E.T.R.
But two or three are not doing so. On This operation three of 44 Squadron were back early and one was late, five of 207 Squadron were in excess of 7 minutes one way or the other.
C.O. remarked that it will be necessary to order early crews to “Bograt”.

10) S/Ldr.GARDNER reported that Control had no difficulties on this night. S/Ldr.BIRD said that Channel “B” was noisy. C.O. said that take-off was slow.

11)
S/Ldr.BAUD said track keeping was mostly O.K. Winds were the main snag. 207/X was late in spite of having flown correct speeds. The A.S.I. is being checked but no report yet received. Different crews had experienced the same trouble with the same aircraft.

1) C.O. went over Flight Plan. Question was raised at Flight Planning as to whether it would be better to come down to 3-5000 feet over Kiel Canal or keep high and risk fighters. A.O.C. decided to accept risk of light flak. Some crews experienced considerable light flak over the canal and others none – possibly due to patchy cloud conditions. One Ju.88 was seen over Hamburg and another enemy aircraft before the target was reached.
[page break]
[underlined] Page 2. [/underlined]
2) Engineering Officer reported flak damage to 44/J and 44/H.

3) F/Lt.JORY saw one aircraft crash in Kiel Canal area. Aircraft concerned was to starboard of track.

4) C.O. and S/Ldr.FERGUSON discussed the difficulty caused because one aircraft in target area had V.H.F. on “transmit”.

5) P/O.JONES reported that all 44 Squadron bombed as planned. F/Lt.LINNETT said two crews of 207 Squadron bombed direct. W/Cmdr.BLACK had told these crews that bombing is to be as planned unless instructions are received to the contrary.

6) C.O. remarked that most photographs were good. S/Ldr.BIRD said one crew of 44 Squadron had 6000 yards undershoot due to trouble with the bombsight which the Bomb Aimer could not correct. F/Lt.LINNETT explained that one error (2700 yards undershoot) was due to photograph being affected by the aircraft being in a dive, also due to over anxiety of new crew.

7) S/Ldr.FERGUSON reported difficulty in climbing to specified bombing height adding that he just reached correct height in time and that he was in a lower height band than some.
S/Ldr.BAUD reported that 4 crews from this Station bombed below correct height. Wind velocity in target area was 3300/50 i.e. from port quarter.

1) F/Lt.KENNEDY reported one early return (44/Y) due to U/S rear turret. Caused by small hole in main pressure gauge pipe resulting from chaffing. This is inspected at every minor inspection. MA.P. have the matter in hand.

2) Engineering Officer reported an early return (44/S) due to loss of oil pressure and coolant overheating. The overheating was due to radiator flap being closed but no cause can be found for the other defect. Pilot (F/Lt. SIMONS) said gauge read zero. The gauge is serviceable.

3) F/Lt. HERBERT reported one A/C had trouble with Master Bomb Switch which, having been checked “on” was subsequently found to be knocked “off”. Thought to be caused by Engineer knocking the switch while in the act of windowing. 44/A – F/O. WALKER struck sea on way back. No instrument failure evident. S/Ldr. BIRD said it was due to “low flying”.
S/Ldr. BAUD said 44 Squadron were under a misapprehension as to the purpose of the master bombing switch which should be always be locked “ON” except in certain circumstances. C.O. ruled that instructions should be given at Navigators Briefing.

4) F/Lt. HERBERT said that ultra – violet lighting in aircraft, though not required at present may be necessary in future.