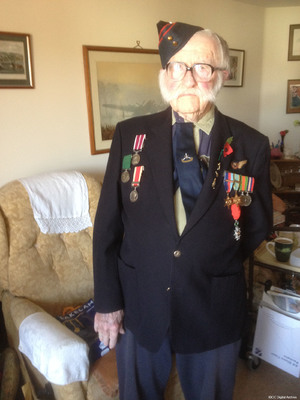 Ken Kileen was called up and reported to ACRC in London at the beginning of 1942. He commenced flying as a navigator at 12 Air School, Queenstown in South Africa flying in Oxfords and Ansons. On his return to UK in 1943 he joined 83 OTU at Peplow flying in Wellingtons. His first operation was dropping leaflets on a nickel operation over occupied France. Their Wellington was damaged by anti-aircraft fire but the crew returned to base safely. He joined 1651 HCU, and on one occasion attempting to land in a Stirling the aircraft crashed after one of the tyres burst writing the aircraft off. Ken joined 3 LFS at Feltwell and on one of his training flights came into close contact with a Me 410 night fighter. He joined 115 Squadron at Witchford in April 1944 and took part in operations in support of the D Day landings. On one operation they encountered three night fighters. After the war Ken was posted to SHAFE communications squadron at Gatwick flying in Ansons on passenger and freight flghts. His last flight was on 2nd August 1946 and he was demobbed shortly after, returning to his civilian job.