20 items. An oral history interview with Flying Officer Kenneth Killeen (b. 1922, 184115, Royal Air Force), his log books, photographs and documents. He flew operations as a navigator with 115 Squadron.
The collection has been loaned to the IBCC Digital Archive for digitisation by Kenneth Killeen and catalogued by Barry Hunter.

Observer’s and air gunner’s flying log book one, for K A L Killeen, navigator, covering the period from 3 April 1943 to 2 August 1946. Detailing his flying training, operations flown and duties with communications flights. He was stationed at…

Kenneth Killeen, Paddy Aitken and two women from the French Forces of the Interior

Pilot Paddy, Navigator Kenneth with Mlle. Marguerite and Mlle. Henriette. One woman is in Free French Army uniform, the other in civilian clothes. Behind is a radial engine and propeller of an aircraft.
On the reverse 'Killeen Paddy Aitken 2 FFI… 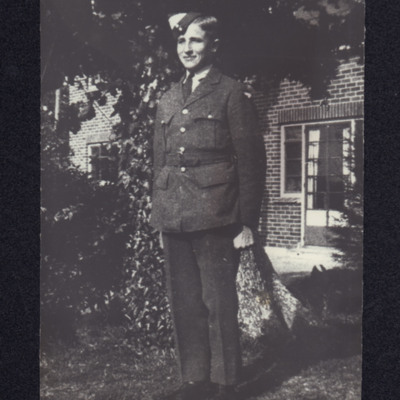 Kenneth standing in a garden. He is wearing his trainee side cap. 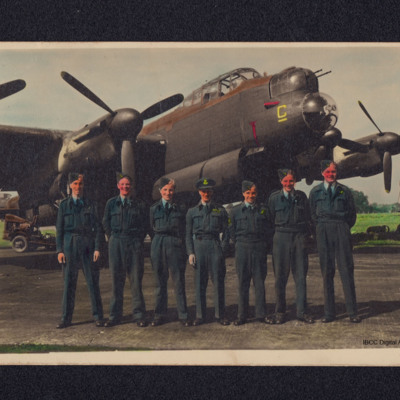 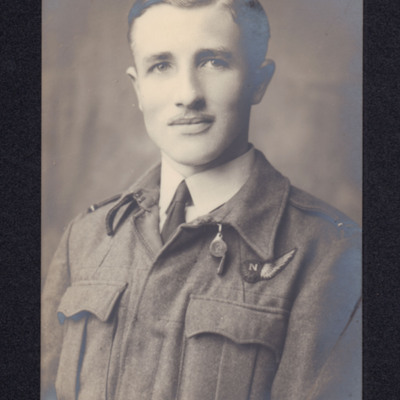 A half-length portrait of Kenneth wearing his navigator's brevet. 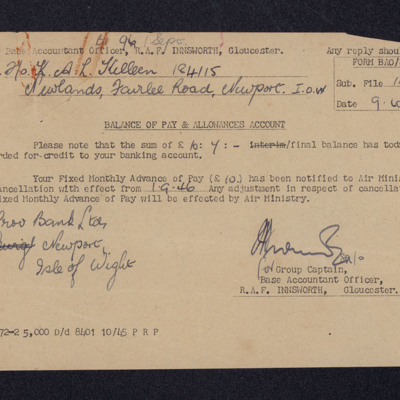 Three documents relating to the payment of pay and allowances.
The first advises that Kenneth's final payment of 10/7 has been paid into his bank.
The second advises that £13 and 2 shillings will be paid, dated July 1946.
The third advises that…

A slip to be used on leave . 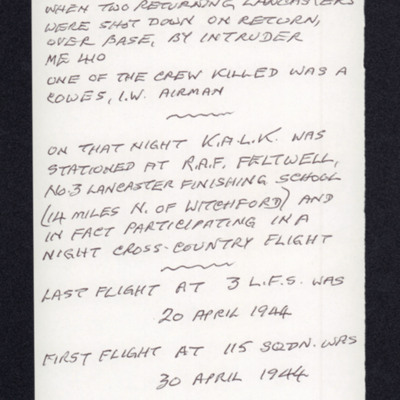 A brief description of the shooting down of two Lancasters by a Me 410 over Witchford. 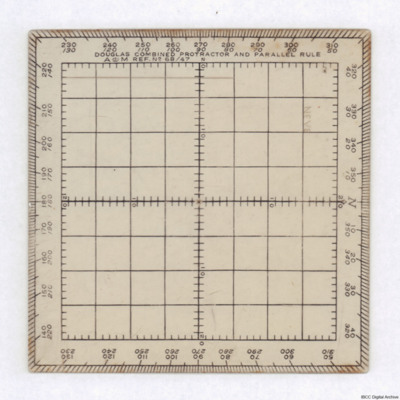 A Douglas Combined Protractor and Parallel Rule issued to navigators by the Air Ministry.
Scratched on the surface of the plastic is 'NEV8' 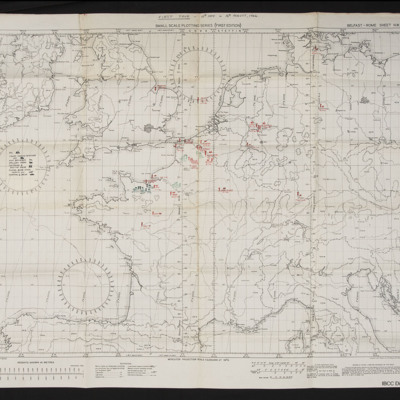 A map of Western Europe marked with the location of bombing operations. Titled 'First Tour - 10th May to 14th August, 1944'.
Within a compass rose is a key to the symbols used on the map. 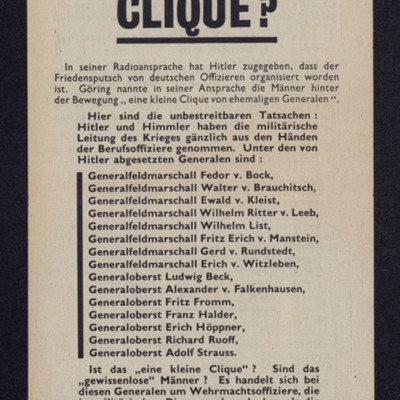 Hitler admits, in radio address at 1am on 21st July, to German generals’ coup. Leaflet points to heightened tensions between army and party. Claims the latter wants to prolong the war for its own ends, whereas generals want peace, acting when their… 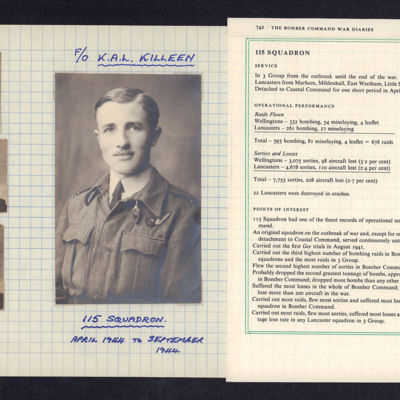 Six photographs and one article on Kenneth's squadron.
Photos 1, 2 and 3 are head and shoulders portraits annotated as "Escape" photographs.
Photo 4 is a half length portrait of Kenneth with a navigator brevet.
Photo 5 is a near three quarter… 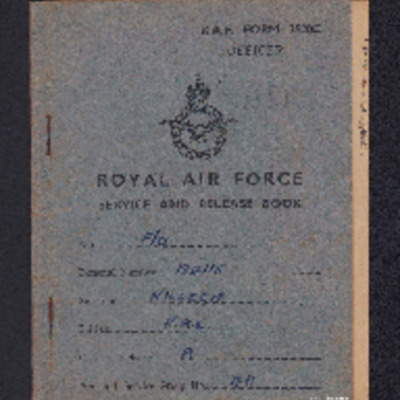 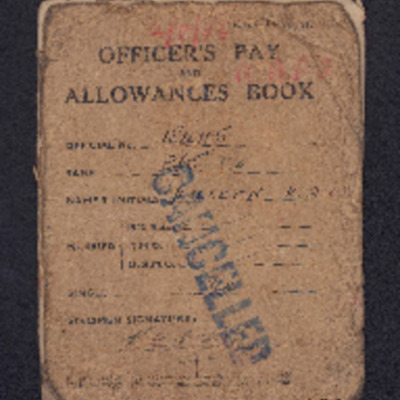 A record of payments made to Kenneth during his service. 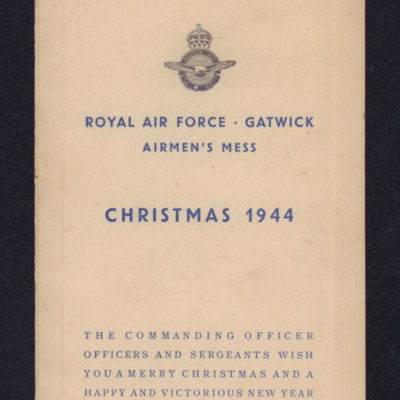 The menu for Christmas dinner followed by a list of events on Christmas , Boxing Day and New Year's Eve.

A Message of Welcome 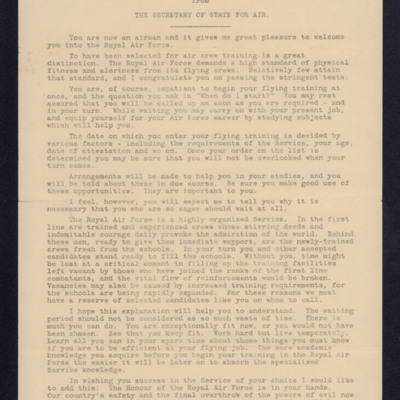 A letter sent to KAL Killeen accepting him for training as a navigator in the RAF. Included is a protective plastic wallet. 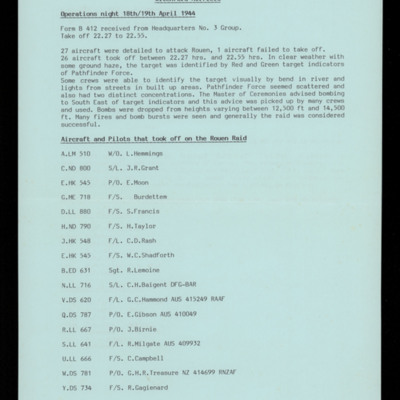 The document covers an operation on Rouen on the night of 18/19 April 1944. It describes the attack and details the aircraft and pilots that took part.
Two aircraft were shot down by a Me 410 as they were landing. The crews are listed. 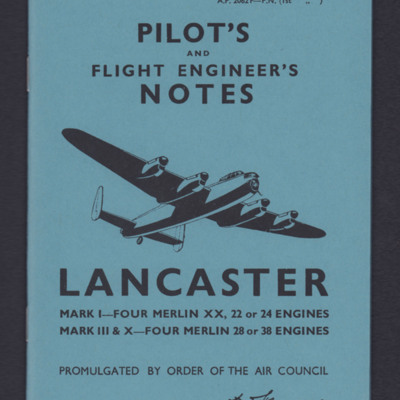 A document issued to Pilots and Flight Engineers to assist the operation of Lancasters. 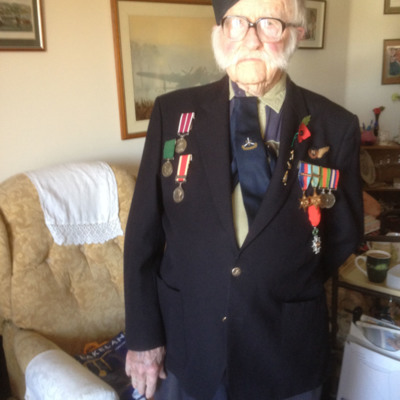 Ken Kileen was called up and reported to ACRC in London at the beginning of 1942. He commenced flying as a navigator at 12 Air School, Queenstown in South Africa flying in Oxfords and Ansons. On his return to UK in 1943 he joined 83 OTU at Peplow…
View all 20 items