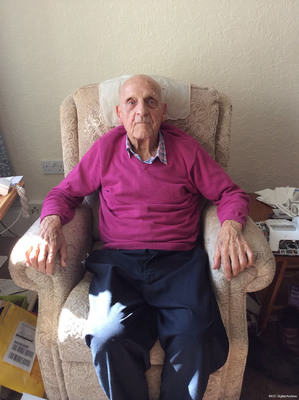 Robert Holman was born and brought up in Leeds. He joined the Air Training Corps, enjoying camps at RAF Pocklington. On leaving school at fourteen he went to work in the shoe industry. He then joined the Royal Air Force as an engineer on ground crew. After working on an aircraft the crew would occasionally take Robert up to give them confidence that he had done a good job. He was finally posted to Lincolnshire with Bomber Command. He recalled that there would be eight or ten engineers working on a major service, which could take two or three days. He worked on Lancasters, Oxfords and Stirlings; the latter being for training purposes.
After the war Robert went back into the shoe industry as a retailer and finally opened a shop for Timpsons. He became a member of the Air Training Corps Old Boys Comrades.
Robert enjoyed his time in the services and remembered incidents, including when he was on guard duty at the gates; having three weeks off after having his appendix out whilst working at RAF Scampton, and getting a lift in the back of a wagon conveying dead sheep.