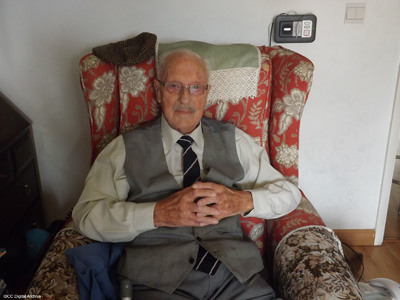 Laurie Harbutt was born in Edmonton, London. Before he volunteered he worked as a wireless telegraphist which was a Reserved Occupation. He wanted to join the Navy but because of his occupation his only option was RAF aircrew. He was posted to 77 Squadron on Whitleys. He witnessed RAF Driffield being attacked by enemy bombers on the 15th of August 1940 during the Battle of Britain. As the war in the Middle East escalated, he was posted to Aden. He spent three and a half years in the Western Desert. In 1943 he was attached to 94 Squadron, and subsequently 55 Squadron in Italy. At Monte Cassino he had to bale out of the aircraft and was badly injured in the fall. Fortunately, he was found by Polish soldiers and was sent to hospital. When he returned to the UK he was posted to 13 MU at RAF Henlow. Laurie recalls the sight of empty tables in the mess as so many didn’t return from the operations.