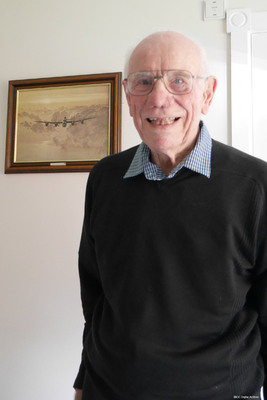 Harry Fearns was born and lived in Barnsley South Yorkshire. He left school at 16 and joined the Prudential Insurance Company as a door to door premiums collector before joining the Royal Air Force in 1944 as a flight engineer. Following initial training at St John’s Wood London and Newquay, Harry completed his training at RAF Stormy Down and RAF St Athan. During training he worked on Lancaster Mk1 and Mk3 aircraft being modified to operate in the Far East, although the war ended before Harry joined an operational squadron. Harry was posted to No 230 Operational Conversion Unit at RAF Lindholme in 1947 where his main recollection was clearing the runways of snow and ice during the very severe winter of 1946/7. From there he was posted to 100 Squadron at RAF Hemswell where he converted to Lincolns although he recalled a preference for the Lancaster. During 1947 the squadron carried out a number of night and daytime exercises, live firing and bombing range practices. After a short period with 97 Squadron, Harry was demobbed late in 1947 and returned to The Prudential Insurance Company before commencing a career in local housing.