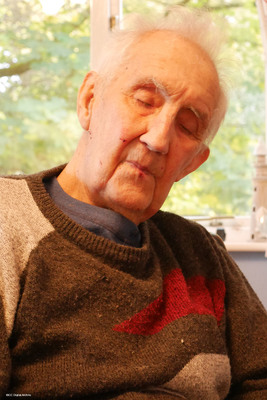 Darwin Evans volunteered for aircrew in 1940 and began training as a navigator. After an accident while training at RAF Bobbington (later RAF Halfpenny Green) ended his operational flying duties, he retrained as a compass adjuster at RAF Cranage and served as an assistant to the Group 1 navigation officer until January 1946. Evans describes flying with crews monthly to calibrate the aircraft compasses and his role in operation briefings. He recollects a good working relationship with the Australian aircrew of 460 Squadron and the Polish aircrew of 300 Squadron, and narrowly avoiding a fatal crash at RAF Binbrook. Finally, he explains how his trouble-shooting role in Bomber Command (inventing heaters for rear gunner oxygen supplies) prepared him for his post-war career as an electrical engineer in nuclear energy research.