71 items. An oral history interview with Darwin Evans (1921 - 2017, 1049547 Royal Air Force) and photographs, including several of Lancaster nose art, Lancaster W4783 AR-G George, and crashed or damaged aircraft. Darwin Evans served as an assistant to the Navigation Officer in 1 Group.

The collection has been loaned to the IBCC Digital Archive for digitisation by Darwin Evans and catalogued by Barry Hunter.

A group of 18 aero-modellers standing in a line and holding their models. On the reverse is 'October 1942'. 49 airmen arranged in four rows. On the reverse are the signatures of those present. Additional information about this item was kindly provided by the donor. RAF Bobbington was also known as RAF Halfpenny Green.

Port side view of a Lancaster 'AR-A' on dispersal. The shadow of the photographer is visable. 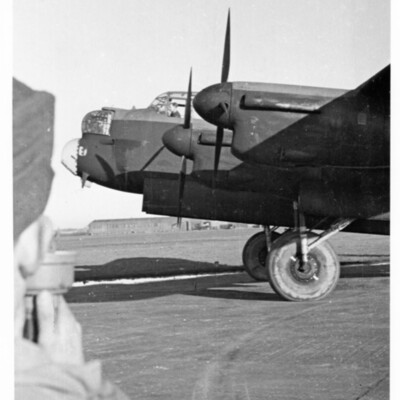 The nose of a Lancaster with an airman in the cockpit. 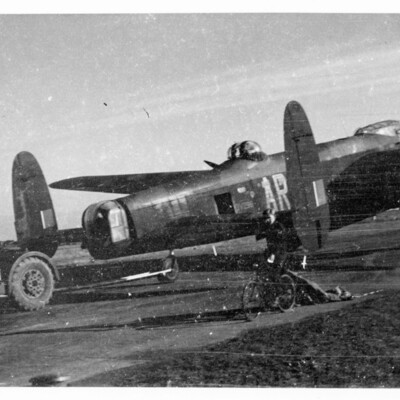 The tail of a Lancaster being towed by a tractor. Also assisting is an airman on a bicycle. It has squadron code 'AR' and 'DV296'. This aircraft crashed at Teltow, Berlin December 1943 with the loss of all crew. 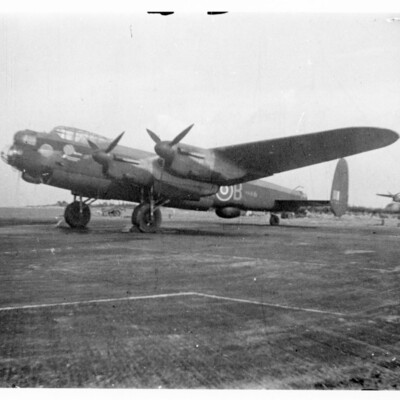 A port side view of a Lancaster 'B' with bomb doors only partially open. A second Lancaster is behind.

Port side view of a Lancaster on dispersal with its engines running. 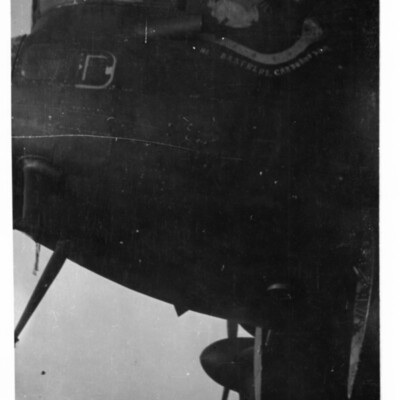 Nose art on a Lancaster 'D' with a cartoon which is not clear. Underneath is text which is indecipherable. 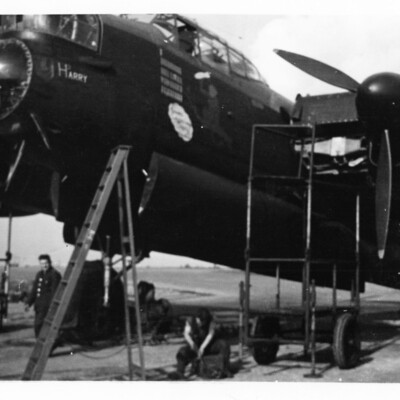 Maintenance operations underway on a Lancaster. Its code is 'H²ARRY'[sic]' 40 operations are marked by painted bombs and further aft is a cartoon character holding a bomb in a threatening manner. Two men are working underneath. There are two engine… 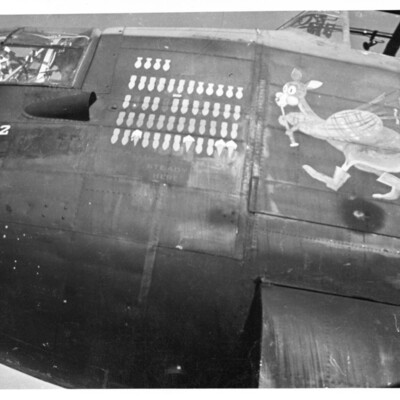 Painted on the nose is a Kangaroo wearing wellingtons and playing bagpipes. Notes are coming out of the pipes. 52 operations are marked including four ice cream cones indicating Italian targets. The Lancaster is 'E²'. 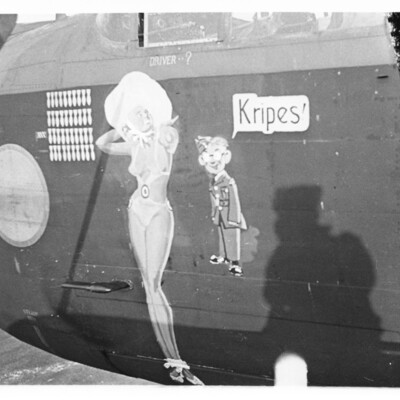 The nose of a Lancaster with a painting of a woman wearing a swim suit with RAF roundels. She is looking up at the cockpit and is wearing a sun hat. Behind her is a representation of David Langdon's 'AC2 Joe Soap’, a small airman with glasses and… 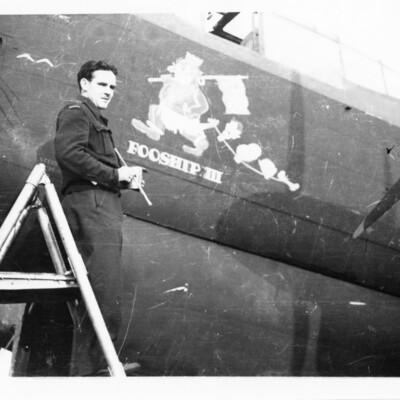 The nose of a Lancaster with an airman working on the nose art. He is at the top of a stepladder. The art is of a man wearing a grass skirt, boots and a crown. Over his right shoulder he has an Australian flag and in his left hand he has a string of… 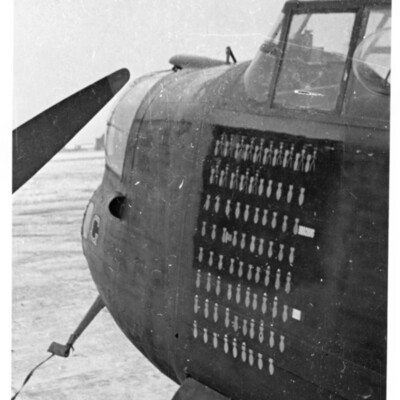 Two images of Lancaster W4783 AR-G's nose. In the first image 79 operations are marked. The second image shows 90 operations. The first 15 operations the bomb is held by a stick figure with a halo. Decoration ribbons are also shown. 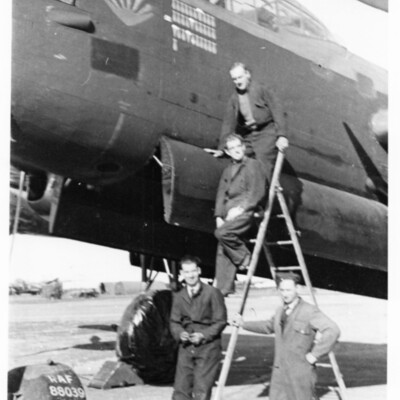 Two airmen are on a tall stepladder and two are standing on the ground. The Lancaster has 31 operations marked by bombs.

The art features a depiction of Hardtmuth Lahm's cartoon dog 'Snifter' heading west over a map of Berlin. There is a Swastika and a large amount of mess left by the dog. This is dripping off the map. The name "Snifter" is painted on.

Six airmen and a Lancaster nose 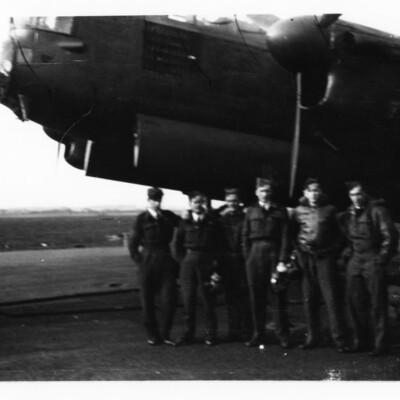 Six airmen standing under the nose of a Lancaster 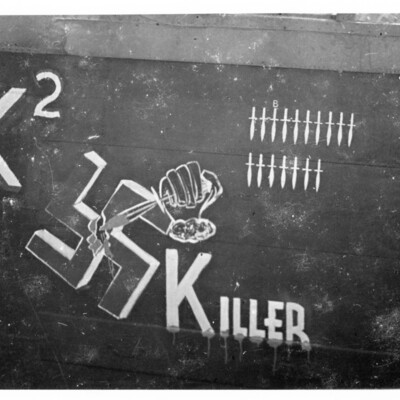 Close up of the nose art on a Lancaster. Depicted is a swastika with a hand held dagger cutting through it. Seventeen operations are marked by daggers, one of which has a 'B' above it. The Lancaster is 'K²'. Beneath is printed 'Killer'. 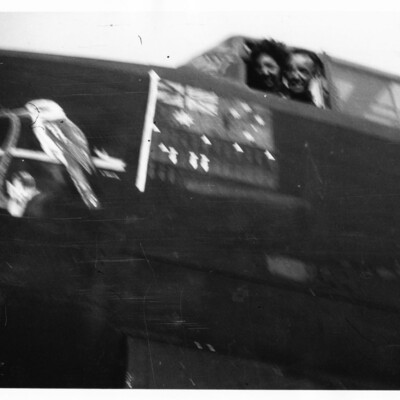 Two close ups of the nose of a Lancaster. Depicted is an Australian flag, a Kookaburra sitting on a branch, with a snake in its beak. The snake's head is a cartoon depiction of Hitler. Twenty three bombs mark operations. Underneath are two people…

A drawing with an aerofoil, a fuselage and an elevator section. The aerofoil has 'USA 35b'

Wellington on the ground 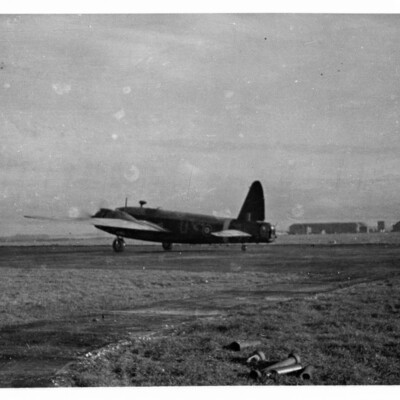 Two port side views of a Wellington. In the second image it is being refuelled. 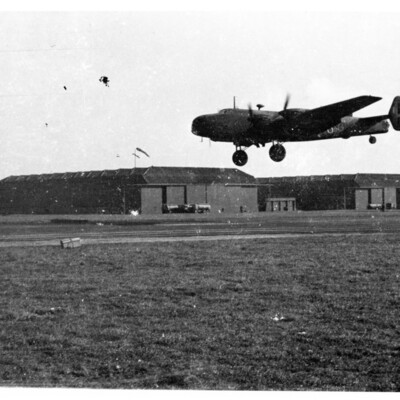 A port side view of a Halifax landing. In the background are three hangars. 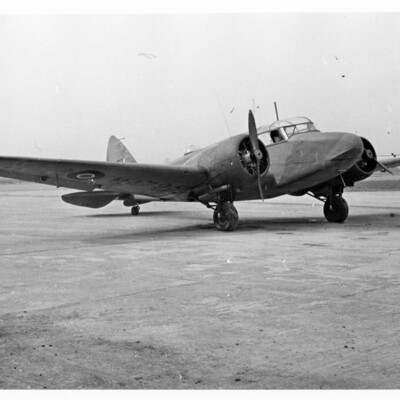 A starboard side view of an Oxford. 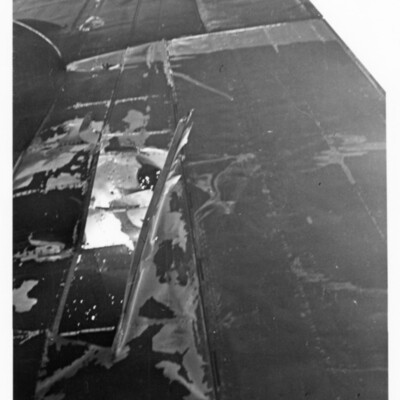 A section of a starboard wing showing damage. 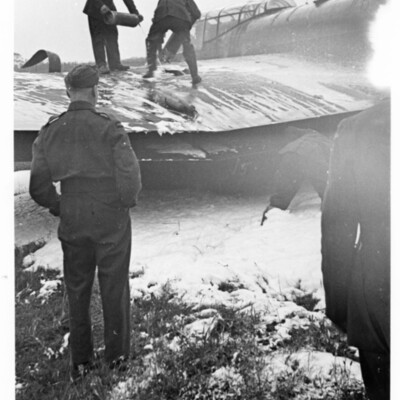 A Lancaster port wing. It has landed wheels up and has been on fire. Two men are on the wing with extinguishers. There is a hole in the wing and one of the propeller blades is bent forward. Three airmen are standing close by on the ground which is…

Airman on a Lancaster 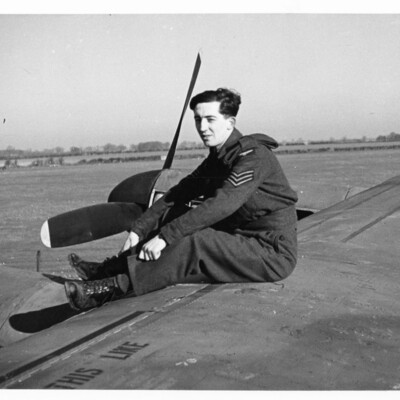 A sergeant airman sitting over the port inner engine of a Lancaster.
View all 71 items