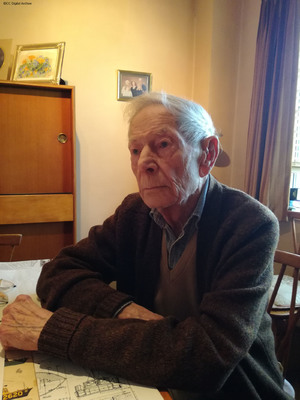 Ken Done served as a wireless operator on Air Sea Rescue. Upon leaving Battersea Grammar School aged 14, he was employed at Chelsea Town Hall as a junior clerk. When the war started, he discovered he was in a reserved occupation and unable to enlist. However, suffering The Blitz was too much and after being rejected for aircrew because of colour blindness, he eventually enlisted as a wireless operator. He became aware of Air Sea Rescue and managed to arrange a posting to RAF Calshot, from where he was allocated to a crew. Postings to Grimsby and Gorleston-on-Sea followed. It was soon realised that rescues from land were taking too long to reach aircrew from ditched or shot down aircraft and the boats used to pre-position in the North Sea or Channel along the routes aircraft were expected to fly. During the D-Day Landings, the Air Sea Rescue boats provided support, and he was later stationed in Ostend and then Norway. Whilst there, the crews from the rescue boats were involved in the recovery and subsequent military funeral of two crews from Blenheim aircraft that had collided during an operation near Bergen earlier in the war. He also talks about trying to save a young American pilot, but unfortunately, they were unable to save his life. He talks about meeting his wife and getting married in 1942. His wife became a WAAF.