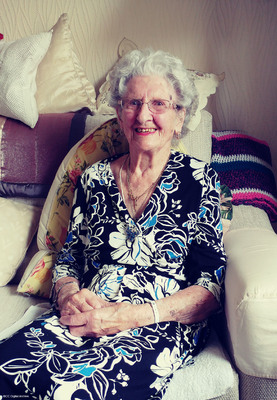 Born in Salford, just outside of Manchester, Freda was a teenager during the Second World War. She recalls her family's culture, school life, meal requirements and how she reacted to the war being declared. She also recounts her experiences of near-misses during bombing, and her understanding of the Anderson shelters. Despite being a family of seven, she believed she had a good diet during the war, because of her father being a milkman and getting the family extra food. She claims that during the war she was not afraid of the bombs, having quite a fatalistic attitude, she also enjoyed the freedom it brought and how it was like an adventure. She claims she could differentiate between American, British and German aircraft through the sounds of their engines, but also believes that the sirens were always sounded after the plane had arrived.

The interview has been edited here as the interviewee spoke about personal, post war matters.