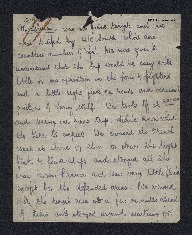 First operation to Montluçon 15 September 1943. Briefed as easy trip with little opposition. Arrived early and waited for Pathfinders, bombed from 8000 ft. Wing Commander Smith missing from operation reported hit by bombs. Operation 2, Mondane 16 September 1943. On arrival at ETA no target in sight. Saw anti-aircraft fire 40 miles away, saw Lake Geneva, one crew though they were over Mediterranean, no idea where they were. Short of fuel and icing up they jettisoned bombs over the Alps diverted on return. Mid upper gunner banged his head and was left at diversion airfield. Operation 3, first to Hannover 22 September 1943. Flew with replacement mid upper gunner. Lots of searchlights and anti-aircraft fire over target, saw Wellington and Stirling below catching light anti-aircraft fire. Target was mass of orange flame visible from 200 miles away. Altered course on return to avoid coned aircraft and was isolated from stream and subsequently illuminated by master searchlight for 10 minutes and engaged by heavy anti-aircraft fire. Hit in nose leaving hole which blew navigators charts all over. Operation 4 Kassel. Pathfinders marked target, saw aircraft go down, released bombs, saw FW 190 on return. Reported that another aircraft had had half its rudder chopped off by a Lancaster, Operation five, 2nd Hannover on 8 November 1943. Still with replacement mid upper gunner, saw aircraft go down while on the run in to target. Lots of searchlights to illuminate for fighters and saws lots of aircraft crossing their run in. On return saw aircraft coned, engaged by anti-aircraft fire and then finished off by two fighters. Operation 6, Düsseldorf on 3 November 1943. Regular mid upper gunner back. Reports many fighter flares and saw a fighter but it did not attack. Searchlights in target area and dropped load. Saw Ju 88 on way back. Another aircraft was shot up over French coast and crashed down south with all crew killed. Operation seven, Berlin 22 November 1943. First trip to big city. Searchlights ineffective due to 10/10 cloud. Saw fighter flares. Saw target indicators going down and defences then opened up. Dropped load and dived out, took seven minutes to clear. Pathfinders dropped good route markets. Operation eight , Leipzig on 3 December 1943 (20th birthday). Saw fighter flares, Mosquito pathfinders, bombed on sky markers due to 10/10 cloud. Operation nine, Frankfurt on 20 December 1943. Took along sprog pilot for familiarisation. Describes anti-aircraft fire bursting, saw attack on Mannheim nearby. Dropped load and beat it but engage by fighter from starboard quarter, mid upper gunner called evasive action and fighter did not open up. Gunners fire 200 rounds at him. Operation ten, Berlin on 20 January 1944. Took along sprog pilot. Saw fighter flares and anti-aircraft fire over target. saw aircraft silhouetted by cloud below. Saw scarecrow over target, huge fireball with oily smoke whirling round. Fighter attacked them on the bomb run, evasive action called by gunner, jettisoned bombs and pilot whirled Halifax around with bomb doors still open. Fighter broke away and they returned to base.