Letter to his wife from Herbert Gray 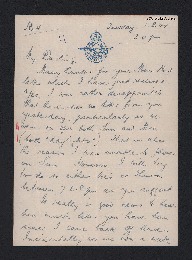 Letter to his wife from Herbert Gray
No. 4

Starts with thanks for letter number 3 but complains about lack of letters for a couple of days particularly as he had been on operations. Sets up times for future phone calls. Noted that the crew’s original aircraft had been lost while being flown by another crew and that after a operation with a strange aircraft they had been issued with their own new one for their ninth daylight and 15th overall operation to Le Havre, which had also been the target for their first daylight operation. States that the crew was allowed to leave the station that afternoon but that he would stay and swot for his commissioning. Noted that he was finding this difficult to swot but a commission would be worthwhile for his civilian career after the war. Letter numbering system starts again after leave at the end of July.

My Darling,
Many thanks for your Mon. No.3 letter which I have just received. Yes. I was rather disappointed that there was no letter from you yesterday, particularly as we were on ops. both Sun. and Mon. (both “daylights”). That is also the reason I was unable to phone on Sun. However, I will try to do either Wed. or Thurs. between 7 & 8 pm as you suggest.

It really is good news to hear how much better you have been since I came back off leave. Incidentally we are now a week

nearer the next leave – we don’t, of course, know the definite day as yet but I shall give you as much warning as possible. I’m hardly back from one leave before I’m looking forward to the next!

Sorry to hear that you got overtired entertaining the card crowd and could not sleep afterwards. You know, I think that I could have helped in that direction! Rotten luck, too, with your four Kings – did you both draw 2 d for bonus’s or is it just the winning hand in such cases.

How is Phil getting on these days? You don’t give me any news of him and surely Anita must have given you plenty of news.

It is nice of you to promise

to write to me again “tomorrow”, which is, of course, today. Anyway, I am looking forward to hearing from you again tomorrow.

Our original kite, “K – King”, was lost a few ops. ago when she was being flow [sic] by a crew who were doing their 30th op. (their last). Wasn’t it rotten luck for them. As a result we had to do Sunday’s trip to Normandy in a strange kite, “T – Tommy”. Yesterday we got a brand new “K – King”, air-tested her straight after lunch, landed, had a very quick meal, into briefing and so off on our 9th day light and altogether our 15th op. Our first and very successful daylight was on Le Havre which was

Also yesterday’s target.
I believe we may go out tonight if we wish but I rather think I shall stay in and do some more swatting. I find it much more difficult to get down to swatting here on squadron than I need to. It is probably the result of our rather highly strung existance [sic] here. Anyway, I try to persuade myself that if I don’t hurry up the war will be over and I shall then never get a commission. Not that I should mind but Firth’s directors are particularly “commission conscious” as someone reminded me on my last visit.

God bless and keep you, my darling.

All my love and embraces