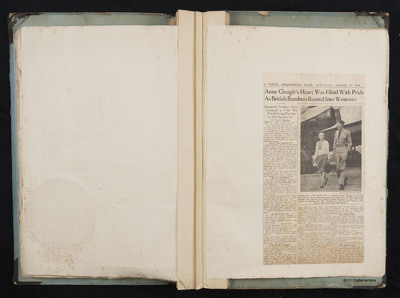 One newspaper cutting on a scrapbook page

[Photograph]
[italics] Springfield Union Photo [/italics]
STROLLING AND CHATTING – Attractive Anne Clough, who before her marriage to an American served with the RAF's WAAF, chats with Leading Aircraftsman Jack Rollitt, ground crewman on one of the Lancasters of Squadron 35. Mrs. Clough was with the unit back in 1940, when it had twin-engined Wellingtons.

Springfield Resident, Now Employed at Field, Was WAAF During War, Serving With Squadron 35
By Francis Merrigan

"Well, I had a little cry and I was very proud of them." This was the reaction of petit, blonde and lovely Mrs. Anne Clough on Wednesday as she stood outside of Hangar 5 at Westover Field and watched 12 RAF Lancaster bombers roar over the base in tight battle formation before landing to bring "Operation Goodwill" to Western Massachusetts.

Served With Squadron 35
Understandable indeed, were the tears shed by Mrs. Clough as she watched these emissaries of good will, for not only was she a WAAF sergeant attached to the RAF during the war, but "back in 1940" she served with Squadron 35, the very outfit whose planes are at Westover Field today.
She's an American now . . . has been in this country for nearly two years and loves it . . . and because the desire to be near "aircraft" persists, she recently took a job with American Overseas Airlines at Westover and was assigned to maintenance control.
"Not only do I like planes, but my husband's going to school, so it's rather necessary that I work," she said, flashing an engaging smile.

Met in Lincolnshire
She met her husband, Gerald C. Clough, Jr., former fighter pilot with the RCAF and AAF, when they were both stationed at Lincolnshire. The fact that he was an AAF captain – had transferred to the air force of his own country in 1942 – and she was a WAAF sergeant didn't deter the course of romance, and so they were married. Mrs. Clough left her desk in hangar 5 yesterday afternoon to be photographed down at the flight line. "I really don't think that I'll know anyone in Squadron 35,"she said, during the drive to the parking stands, "because it was so long ago that I was with them. And besides, they had Wellington bombers then . . . they're two-engine airplanes, you know."

She Liked Them All
She said her duties consisted of overseeing the officers' mess, and "everything in general."
How many squadrons had she served with?
She smiled . . . "Oh several . . . let's see, Squadron 45, 78, 37 . . . all of those were heavy bombers . . . and I served with the Spitfires too."
Which did she like best?
"Oh, I don't know, I guess I liked them all . . . there isn't any difference." The conversation turned again to the arrival of the Lancasters and she mentioned, a bit wistfully it seemed, that it was something she hadn't seen for a long, long time.

Used To Be All Black
"I was thrilled, too, when they all came to attention out in front of the planes and the band played 'God Save the King.' " she said . . . "My, but I was proud of them."
"This is the first time I've seen them white," she said as the car came to a stop before a maintenance shed . . . "When I served in the WAAF they were painted all black." The under portion of the craft is black, and the upper parts glisten white under their coat of white paint. A lanky blond chap in an RAF dress uniform was the only squadron member in the area and he introduced himself as LAC Jack Rollitt of Yorkshire . . . explaining that LAC meant "leading aircraftsman" and compared somewhat to our [indecipherable word] "except that we have a bit more responsibility than your [indecipherable word]."

Only Five So Far
"How many pairs of nylons are you bringing back?" asked Mrs. Clough after introductions had been made all around.
"Only five so far." answered the friendly Yorkshireman, "But I want to get some more before we go."
"Only five!" echoed the little blond . . . "Do you know that my mother had to pay one pound ten on two pairs of nylons that I sent her? And they cost me only about £1.4s a pair."
Rollitt was asked what disposition he had planned for the nylons.
"Oh, I'll dish them out," he said . . . "One here and one there . . . treat them all alike is what I say."
Anne, who carried a large pocket-book to which her husband's AAF wings were affixed, chatted with the aircraftsman about this and that . . . she informed him that she had no WAAF uniform because she received her discharge before the war ended . . . and commented on the squadron crest painted on the nose . . . Rollitt said he guessed it was the forepart of Pegasus, the flying horse.

Good Living There
The talk veered around to pounds and dollars again and Mrs. Clough mentioned she had written to her mother, commenting on the 26 pounds (about 30 dollars) monthly rent she pays.
"That is a bit stiff, isn't it?" asked Rollitt. "I could live very nicely in England on that."
On 24 or 22 dollars a week?
"Five pounds a week? I'll say you could," was Rollitt's emphatic answer.
It was time for Mrs. Clough to return to her desk, as Rollitt headed back to the shed.
"I'll be out to see the squadron tomorrow," Mrs. Clough called back.

Open House Today
She'll be joined by hundreds of Western Massachusetts residents, in all probability, for it's "open house" at the base and the big Lancasters will be open for inspection. Members of the crews will take spectators through, showing them the mammoth bombers which teamed up with the AAF to give Germany and other occupied areas such an aerial pasting.