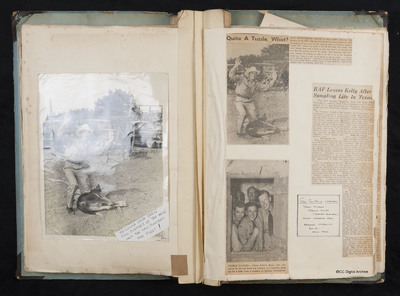 One b/w photograph, three newspaper cuttings and a handwritten note on a scrapbook page

[photograph]
HE WOULD HAVE BEEN COW PUNCHER OF THE YEAR ONLY THE COW PUNCHED HIM FIRST!
[inserted] Ron [/inserted]

Quite A Tussle, What?
[photograph]

STAY DOWN THERE, DOGIE, is what Flight Lieutenant Ron Mathers of the RAF tells this little parcel of future beefsteak, after throwing it in for a loss on the sands of Texas in Bandera, Sunday, August 4th. There are quite a few of the folks back home who won't believe Ron had a hand in this, but there's no denying the fact that his picture is here for proof. The Lieutenant had sufficient amount of courage to take a try at it, or as the Tommies would say, "give it a go," so he deserves all the credit . . . Throw, catch, hog-tie and all. "Tommie" found out that the Texas Steer has more tricks than a whole group of Nazi fighters. But he did conquer him, for pictures don't lie!

RAF Leaves Kelly After Sampling Life In Texas
The 35th Bomber Squadron, RAF, left Kelly Field Thursday to continue their trans-continental tour in Washington D.C., and Massachusetts. Departure was delayed a day because of adverse weather conditions in Washington.
The "Tommies" landed at Kelly Saturday, August 3, at 4 p.m. and were greeted by a formal military Honor [sic] Guard. It took only fifteen minutes from the time the first Lancaster hit the run-way until all 15 planes were on the line in front of the reviewing stand. The crews "lit" and formed in front of their planes, then marched snappily up to "Squadron Front" before the speakers' stand.

Welcomed by CG
Welcoming addresses were given by Brig. Gen. George H. Beverley, commanding Kelly, and Mr. A.J. Lewis, Acting Chairman of the Military Affairs Committee with the San Antonio Chamber of Commerce. Following these, Group Commander R.C.M. Collard gave an address of gratitude and appreciation to Kelly and Texas.
After the ceremony the British officers were escorted to the B.O.Q., and the NCO's and crew members were transported to the "Palace", where they were billeted during their stay here. Sunday, August 4, the group was taken to Bandera, for a real Texas treat . . . a rodeo and barbecue. While there they visited the Mayan and Lost Valley Guest ranches. All the men went "western" in a big way, trying on "ten gallon hats", rolling their own smokes, riding cow ponies, roping calves, and doing other feats typical of the open range.
Asked what he thought of the Texans' drawl, Flight Lieutenant Gerry Dawson said, "I think Texans talk so slowly because if they talked faster they'd sweat more."

Rodeo Big Success
For a great majority of the men, this was the first time they had ever seen a rodeo or attended a barbecue. The only disrupting factor was that the sun had a habit of baking the men as they watched the performance.
Returning to the Field Sunday evening, the men were treated to a banquet at the Officers' and NCO Clubs. A wonderful dinner with a dance following was given at both clubs.
Monday the group went to the Alamo and other interesting and historical points in San Antonio. Later in the evening they were honor [sic] guests at a picnic at Koehler Park, given by the British War Brides Society of San Antonio. The general public had the opportunity to meet the group at the park. Very fine entertainment was provided for the men at the picnic, and following this there was informal dancing.

La Villita Luncheon
The Squadron toured to La Villita Tuesday, to be guests of the San Antonio Chamber of Commerce at a luncheon. The meal was entirely made up of Mexican dishes, a treat which all the men enjoyed immensely.
Distinguished guests at the luncheon besides Brig. Gen. Geo. H. Beverley, who was host to the RAF throughout their stay, were Maj. Gen. James P. Hodges, Commanding General of the Flying Training Command, AAF; Maj. Gen. John B. Coulter, Deputy Commander of the 4th Army; Brig. Gen. Lewis Beebe, who was on Corregidor with Gen. Wainwright, and present Chief of Staff of the 4th Army; and Col. W.R. Tuttle, retired, ranking Reserve Officer in this part of the country.
All being given due credit, the members of the British squadron have enjoyed every minute of their stay here. It's a great country to them, made up of great people. Many of the men have expressed a desire to return "on their own back" after they have ended their tour of duty in the RAF.

[photograph]
FAMED FLYERS – These British flyers who saw much of the war from the window of a bomber, gang up for a look from a window of Mission Concepcion [sic].