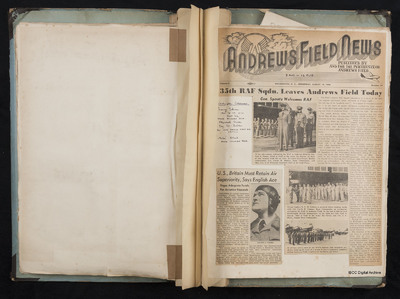 Two newspaper cuttings and handwritten notes on an album page

PUBLISHED BY AND FOR THE PERSONNEL OF ANDREWS FIELD

Gen. Spaatz Welcomes RAF
[photograph]
At the microphone welcoming the RAF to Andrews Field is Gen. Carl A. Spaatz, Chief of Staff of the Army Air Forces. In back of him, reading from left to right, are Lord Inverchapel, British Ambassador; Col. Curtis D. Sluman, Base Commander, and Maj. Gen. O.P Weyland, Assistant Chief of Air Staff Plans.

[photograph]
Group Captain R.C.M. Collard is pictured above shaking hands with Col. Curtis D. Sluman, Base Commander, at ceremonies welcoming the RAF to Andrews Field. To the left of him is Lord Inverchapel, British Ambassador; to his right are Gen. Carl A. Spaatz, Chief of Staff of the Army Air Forces, and Col. A.L. Berry, Deputy Base Commander.

[photograph]
In picture above, men of the RAF's famous 35th Squadron are shown lined up in front of a group of heavy Lancaster bombers during Andrews Field reception for the Royal Air Force.

The RAF's famous 35th Squadron zoomed northward today on the last lap of its "goodwill tour" of U.S. air bases as guests of the Army Air Corps after spending one week at Andrews Field.
The noted British fliers of World War II flew 12 Lancaster bombers from San Antonio, Tex., to Andrews Field on August 8. The bombers are still wearing the battle paint that distinguished them in the night raids over Germany.
The British ambassador, Hon. Lord Inverchapel; the AAF's Chief of Staff, Gen. Carl A. Spaatz; the commanding officer of Andrews Field, Col. C.D. Sluman, and many other dignitaries were on hand to greet the fliers.
Lord Inverchapel welcomed No. 35 Squadron to the Washington area, and stated that while they were in this vicinity he thought he should retire, allowing them to serve as ambassadors. He also invited all the members of No. 35 Squadron to a party at the Embassy on Friday night.
In a speech of welcome, General Spaatz recalled the close cooperation that had existed between the RAF and the AAF. He said that it was imperative that this relationship should continue to exist between the two air forces.
While at Andrews Field the 209 English airmen, all veterans of Britain's much decorated Pathfinder Force, were entertained by both military officials and civilians. The entertainment ranged from downing brews at the Pte Club with GI's to drinking tea on the lawn of the British Embassy in response to Lord Inverchapel's invitation.
On Saturday morning, August 10, the British aircraft gave a demonstration flight over Atlantic City, Philadelphia, Baltimore and Washington, taking off from Andrews Field at 0915. Thirty newsmen went on this flight. From 1300 to 1500 Saturday afternoon the public was invited to an open house here. Royal Air Force crews stood by their Lancasters and answered questions concerning their equipment. During the late afternoon and evening Andrews Field held a gala beach party at Chesapeake Beach for all enlisted visiting RAF personnel and for Andrews Field enlisted and civilian personnel. Swimming, a picnic supper, and dancing were the main features of the day. On Saturday night, a buffet dinner and dance were held at the Officers' Club for all RAF and Andrews Field officers.
Forty Air Attaches visited the Base Sunday morning at the invitation of Headquarters AAF. British service women and other members of the British Colony in Washington were also guests here Sunday afternoon. In the evening the RAF personnel attended the AAF band concert given on the Capitol steps.
During the course of their stay in Washington our English guests also went on sight-seeing tours as well as visiting Bolling Field and attending dinner parties and other social functions.
The itinerary of No. 35 Squadron since it arrived at Mitchell Field July 17 from Graveley, Huntingdon, England, via Azores and Newfoundland, has been St. Louis, Denver, Los Angeles, San Antonio, Tex., and Andrews Field. The squadron is now headed for Westover Field, Chicopee Falls, Mass., where it will remain for four days before completing the cycle back to Mitchell Field. From there they will return to England, where most of the men will await their well-earned discharges.

Regardless of current economic conditions, United States and Great Britain must appropriate adequate funds for research and development of modern military aviation if world peace is to be maintained.
This conviction was expressed yesterday by Wing Comdr. Allan J. Craig, 23-year-old British war hero and the youngest officer of his rank in the Royal Air Force, corresponding to a lieutenant colonel in the U.S. army.
Here on "Operation Goodwill" at the invitation of the Army Air Forces, Comdr. Craig is head of the famed Thirty-Fifth Squadron, the Lancaster bomber outfit which saluted President Truman Saturday in a formation over the White House, and which is being entertained at Andrews Field. With a maturity belying his years, the youthful veteran of 73 European sorties pleaded earnestly for public awareness of the "tremendous changes" taking place in aviation. "The people must be made to understand that present-day aircraft become obsolete practically as soon as they are manufactured. We must not practice false economy with inferior air power. With weak air power we will have inferior peace power," he said.
Craig holds the Distinguished Service Order, the Distinguished Flying Cross, a Brazilian decoration and numerous campaign stars. The Lancaster crews will leave Washington Wednesday for Boston and New York, returning to England August 22. They will be feted tonight by Gen. Carl Spaatz and other top A.A.F. generals.