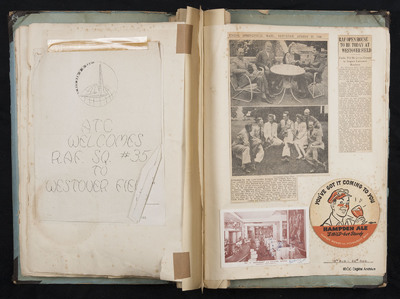 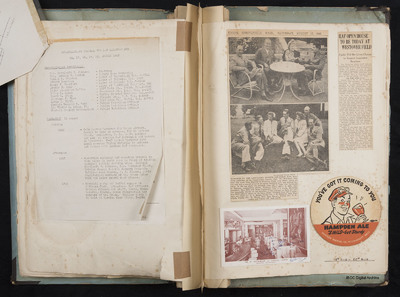 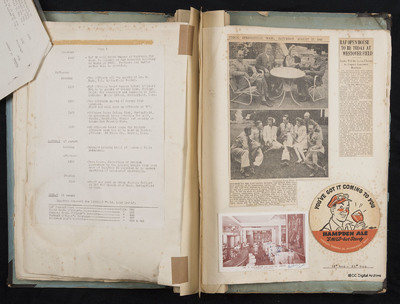 Item 1 is a typed entertainment programme for 35 Squadron at Westover Field.
Item 2 is a newspaper cutting about 35 Squadron and their social activities.
Item 3 is a newspaper cutting titled 'RAF Open House to be today at Westover Field'.
Item 4 is a beer mat 'You've got it Coming to you Hampden Ale 'Smild but Sturdy'
Item 5 is a photograph of a the 'X' restaurant signed by women.
The pages are dated 18th-22nd Aug.

1945 – RAF EM will board busses [sic] at barracks for dance in Holyoke at War Memorial Building to begin at 2000. Partners and buffet supper will be provided.

1100 – RAF officers board busses [sic] before officers BOQ to be guests of Colony Club, Springfield, for cocktails and luncheon at 1130. Address: Maple Street, Springfield, Mass.

1400 – Open House. Inspection of British Lancasters by the general public with each crew of Squadron 35 standing by to answer questions of interested spectators.

2100 – Staff car pick up Group Captain Collard at BOQ for Speech over WMAS, Springfield at 2145.

MEMBERS OF THE LANCASTER BOMBER SQUADRON, RAF, were feted yesterday at the Longmeadow Country Club. The Britishers, who flew this week from England to Westover Field, were dinner guests at the club and a special program of sports, including golf, was planned for them. In the top photo are pictured from left to right, Col. Cortlandt S. Johnson, commanding officer, Westover Field; Harry B. Ellis, Club president; Mrs. Ellis and Wing Commander Alan J.L. Craig. Enjoying the hospitable charms of two members of the younger set here are several RAF officers shown in the lower photo. Pictured from left to right, they are Flight Lt. H. G. Bullen, Flying Off. J.E. Robinson, Miss Jean Clark, Flying Off. W. Haigh, Miss Jane Harper, Flying Off. F.P. Leadem and Flying Off. Jack Smith.

RAF OPEN HOUSE TO BE TODAY AT WESTOVER FIELD

Public Will Be Given Chance to Inspect Lancaster Bombers
The Westover Field RAF visitors, Pathfinder Squadron 35, will hold open house from 2 to 5 this afternoon to permit the public to view at close range the 16 Lancaster bombers which are completing their good-will tour of America with a four day stop-over at the sprawling ATC base.

Can Talk With Crews
Group Capt. H.C.M. Collard of the RAF has extended through Col. Cortlandt S. Johnson, base commander, a cordial invitation to the members of the surrounding communities to visit Westover, examine the giant Lancasters, Britain's largest wartime bomber, and chat with their combat crew members. He feels, he said yesterday, that this open house is the best way in which he and his men of the squadron can express their deep appreciation for the most hospitable manner in which the citizens of the state have received and royally entertained them. Crews of the ships will be stationed besides the planes to answer all questions that visitors may put to them. Also on hand at open house will be the Westover Field band with a group of RAF and AAF selections to furnish a fitting background for a squadron which is credited with over 150 sorties against the Axis [indecipherable word].
Military guides will be placed at all gates and throughout the area to aid visitors.
Today is the final day of activity for Squadron 35 in this area. Tomorrow morning the ships will take off, circle Springfield and Holyoke, and then depart for Mitchell Field preparatory to their return trip to England. En route to New York, the planes will fly over Worcester and Boston, giving residents of those cities an opportunity to observe the tight battle formation which poor visibility prevent them from seeing when the RAF unit arrived at Westover on Wednesday.