19 items. Sergeant Frank Fuller was the rear gunner on a 7 Squadron Lancaster captained by Squadron Leader C H Wilson, Distinguished Flying Cross, which was shot down during operations to Nuremberg on 3/31 March 1944. Collection consists of letters to Mrs Wilson, the captain's wife, from the parents of other crew members and official sources after crew reported missing.

The collection has been loaned to the IBCC Digital Archive for digitisation by Maurice Burl and catalogued by Nigel Huckins.

Mary and Joe, Tess and John at Church Road, Joe at Bishops Court 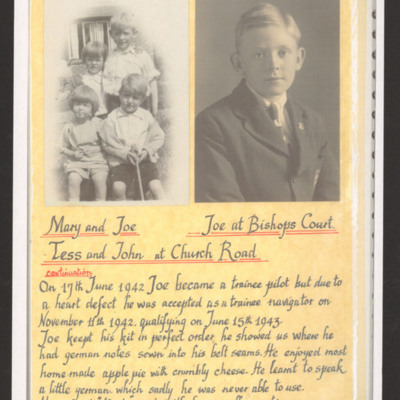 Top left a photograph of a boy and a girl standing behind sitting boy and girl. The boy in front is holding a cane. In the background the window of a house. Captioned 'Mary and Joe, Tess and John at Church Road'. Top right a head and shoulders… 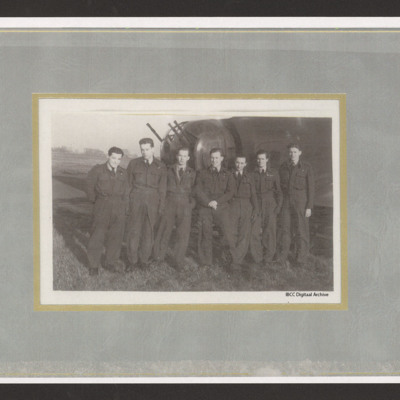 Three versions of a photograph of seven aircrew wearing battledress standing in line in front of the rear turret of a Lancaster. In the second photograph the right hand three are named as 'Frank Fuller, Wilson and Joe Stevens navigator/pilot'. The… 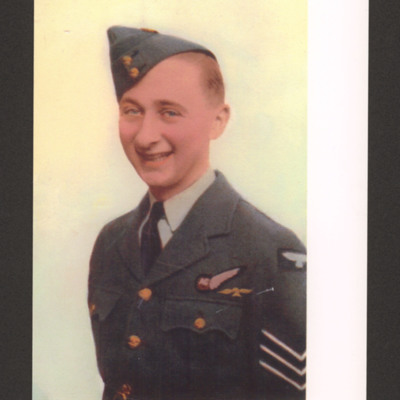 Head and shoulders portrait of an airman wearing side cap and tunic with air gunner brevet, Pathfinder badge and sergeants stripes. 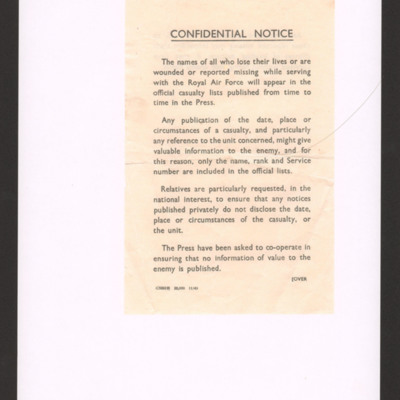 Pamphlet giving official guidance to relatives on privately published notices concerning RAF casualties to ensure they do not contain information of use to enemy. Press have been asked to cooperate and any premature reference in press might…

Advice to the relative of a man who is missing

Official pamphlet stating action that service departments carry out to try and trace personnel reported missing. As soon as any reliable news was obtained it would be passed to relatives. 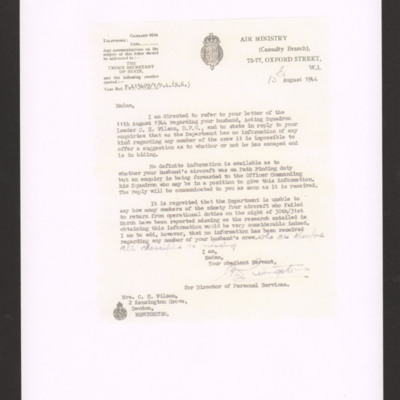 Letter to Mrs Wilson from 7 Squadron 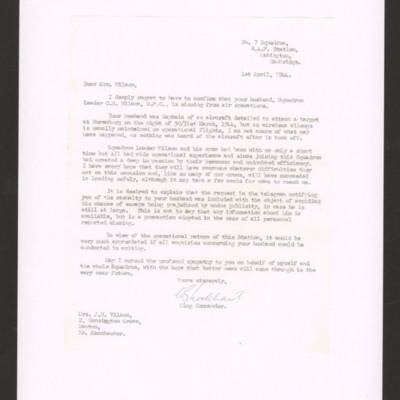 Letter from Wing Commander Lockhart informs her that her husband Squadron Leader C H Wilson was missing from air operation to Nuremberg on 30/31 March 1944. Crew had wide operational experience and hope that are safe but it will take a few weeks to…

Letter to Mrs Wilson from mother of Sergeant Joe Stevens 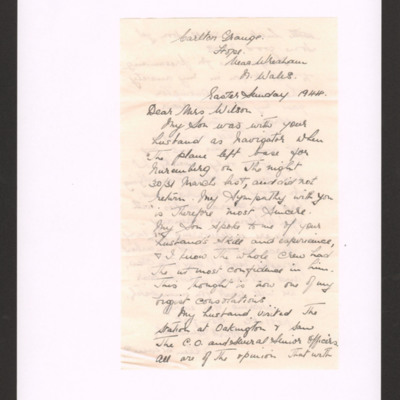 Letter to Mrs Wilson from Ellen Stevens, mother of navigator Sergeant J Stevens. She writes that her son had mentioned her husband's skill and experience and the crew had the utmost confidence in him. Hoping they will hear good news and asking her to…

Letter to Mrs Wilson from her husband's batman 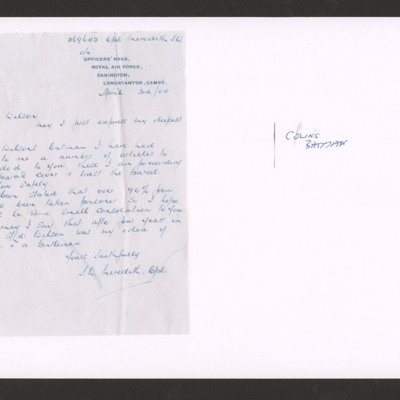 Letter from Corporal F W Meredith, Squadron Leader Wilson's batman, expressing sympathy and stating that he had been ask to forward a number of articles and he would do this under separate cover. Offers hope that her husband was taken prisoner.

Letter to Mrs Wilson from father of Sergeant T Liddle 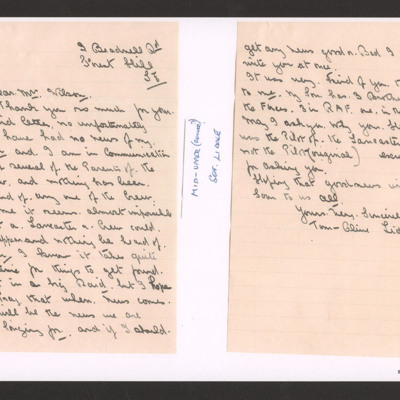 Letter from Mr T Liddle, father of mid upper gunner Sergeant T Liddle. Writes that he has no news of his son and that he is in communication with other parents of crew who have also had no news. Hopes for good news. Mentions that his son had three…

Letter to Mrs Wilson from mother of Sergeant Jenkins 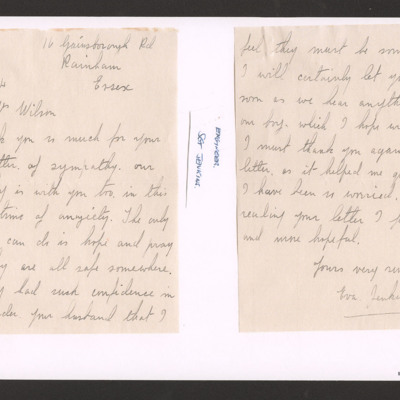 Letter from mother of flight engineer, written to the captains wife expressing sympathy, thanks and hope that the crew are safe somewhere.

Letter to Mrs Wilson from mother of Frank Fuller

Letter to Mrs Wilson, wife of captain, from mother of Frank Fuller, rear gunner on the crew. Crew did not return from operations on 30/31 March Hoping for news. Will write if they hear anything. 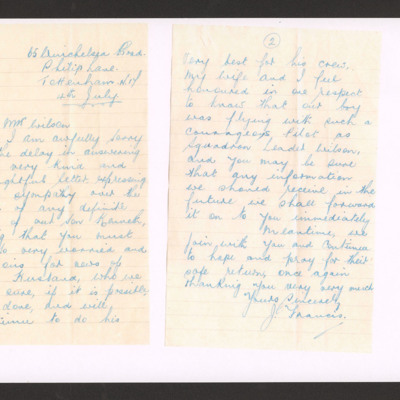 Written by the father of the wireless operator Sgt Kenneth Francis to the captains wife. Continue to hope for crews survival and writes that they felt honoured that their son was flying with such a courageous pilot as Squadron Leader Wilson. 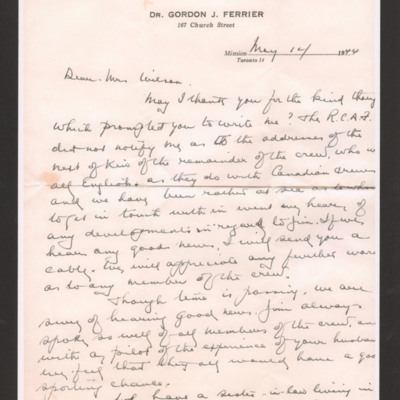 Letter from the father of Jim Ferrier, the Canadian bomb aimer in the crew to Mrs Wilson, the wife of the captain. He thanks her for contacting him as he was not informed of addresses of next of kin of other crew. He holds out hope of news and says…

Letter from chaplain to Mrs Wilson 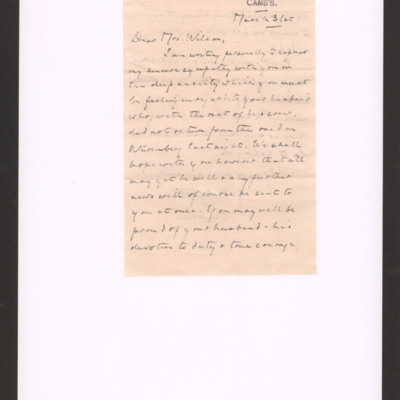 Letter from the Chaplain at Royal Air Force Oakington to Mrs Wilson expressing his sympathy that her husband and his crew did not return from an operation to Nuremberg the previous evening. 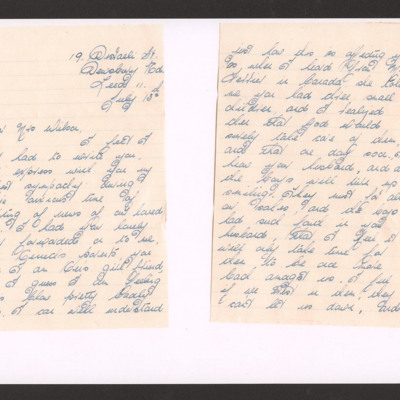 Letter from Margaret, girl friend of crew member Sergeant K G Francis's, to Mrs Wilson writing of her sympathy for Mrs Wilson’s husband and his crew who have been reported missing. 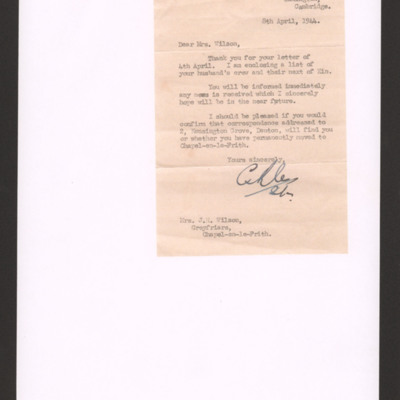 Letter to Mrs J. H. Wilson from 7 Squadron enclosing a list of next of kin for her husband’s crew and requesting confirmation of her address. 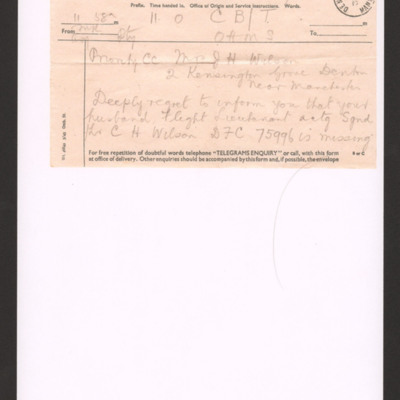 Letter from Jim to Gray 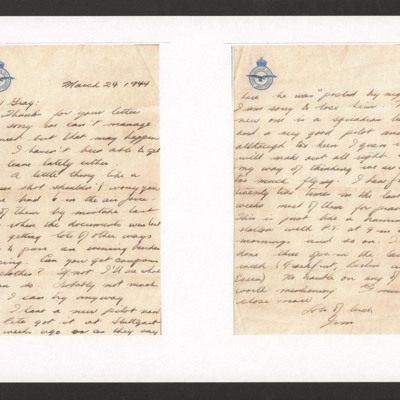 Writes that is not possible to meet and cannot get leave. mentions tetanus shots and clothes coupons. Writes that he has a new pilot as his own was killed recently. Complains of too much training flying. but has done three operations recently to…
View all 19 items