54 items. The collection concerns Flight Sergeant Malcolm L Payne (417512 Royal Australian Air Force). He flew operations from RAF Bardney as an air gunner with 9 Squadron and was killed in action along with other members of his crew on 13 July 1944. The collection consists of his letters to Miss Doris Weeks, letters from Doris Weeks to Malcolm Payne's mother after his death and official letters to Doris Weeks from the Royal Australian Air Force concerning his death, grave and bequeaths.

The collection has been loaned to the IBCC Digital Archive for digitisation by Debbie Brown and catalogued by Nigel Huckins.

Additional information on Malcolm L Payne is available via the IBCC Losses Database.

Seven aircrew standing behind a Lancaster 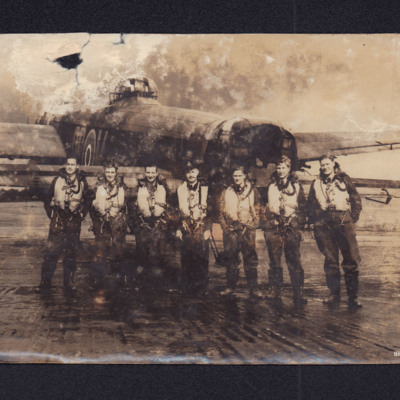 Seven aircrew wearing Mae West standing in line at rear of a Lancaster. 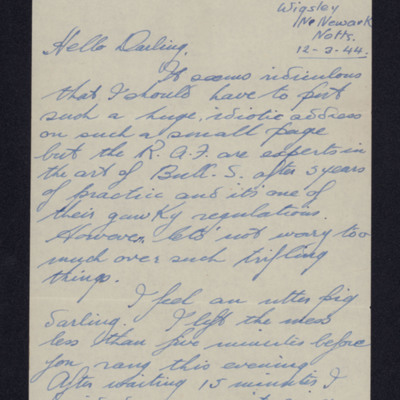 He writes apologising for missing her phone call, about his friends' antics and his activities. Says he is happy to have his bicycle. Ends with endearments. 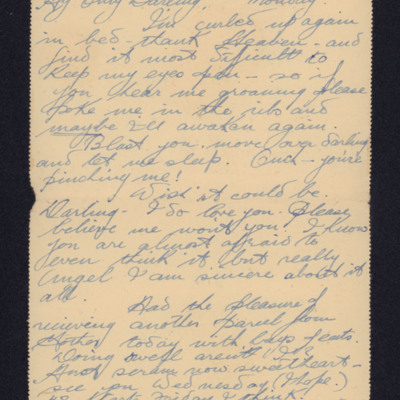 Starts with love talk, mentions parcel from mother and leave coming up. 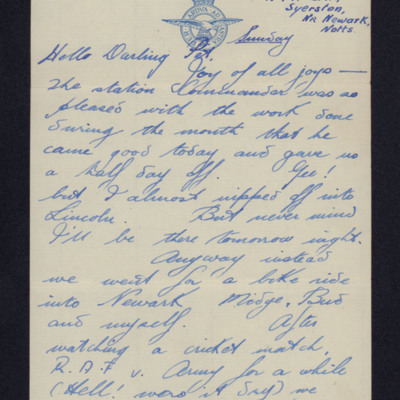 Writes that station commander gave them half a day off and they went into Newark and talks about their activities there, Continues with love talk and mention of marriage. 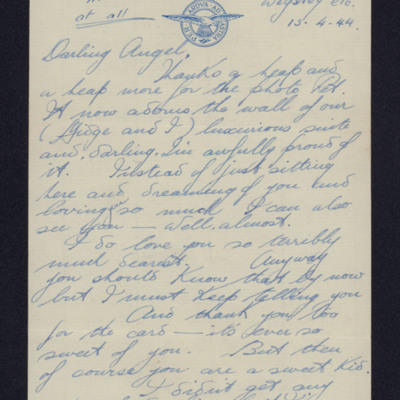 Thanks her for photograph and card and complains that he has received no parcel. Sorry he missed seeing her but had to be back at base. Flew but overran runway into hedge on landing. Ends with endearments. 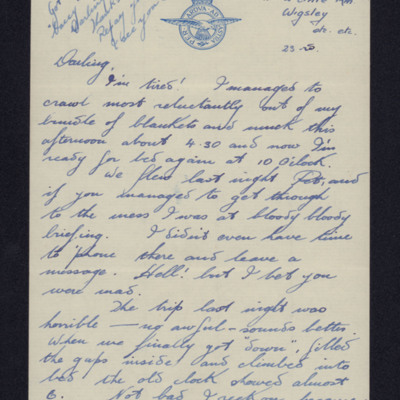 Writes about a bad operation the previous night. Explains why he could not come and see her. Hoping for 48 hour pass. Tells story about bottle of ammonia and identified an acquaintance seen with girl in local cinema. 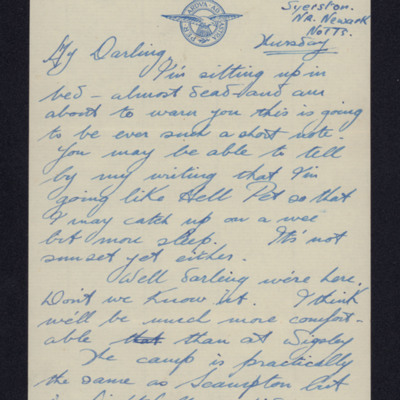 Writes he is tired but that they will be more comfortable in new camp. Explains he could not phone and that he had written to his mother. 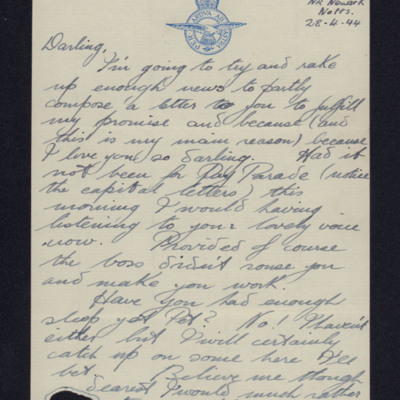 Starts with endearments and love talk and talk of pay parade. Mentions reconnaissance to Newark and has received her letter. Writes about how he now charges other to use his stuff as he is saving up. Talks of daily activities and that he has written… 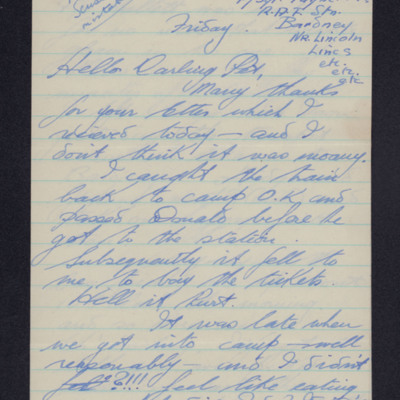 Writes about journey back to camp by train. Talks about moving to Bardney. Scheduled for cross country but had to see medical officer who grounded him for three days and now he has to do clean up tasks, Mentions easy trains to Lincoln to see her and… 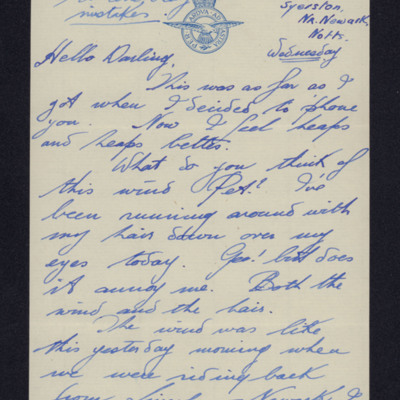 Feeling better after phoning her. Talks about wind and catches up with news about long days. Mentions six letters from home. Ends with endearments 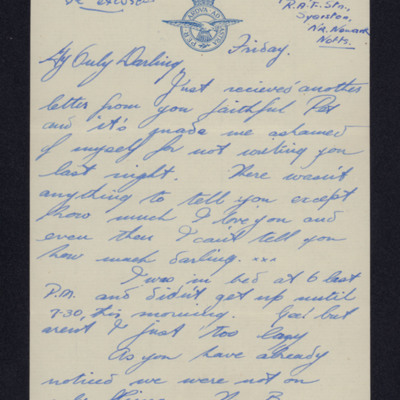 Starts with some love talk and explains that flying did not happen and missed opportunity to see her. Hoping to go to Lincoln to see her that evening. 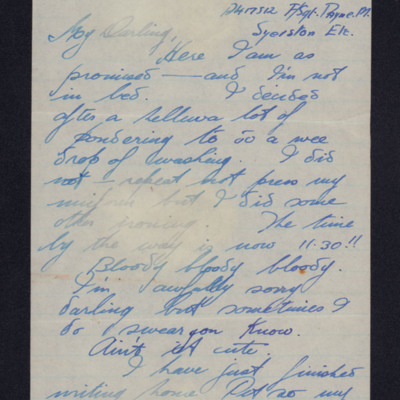 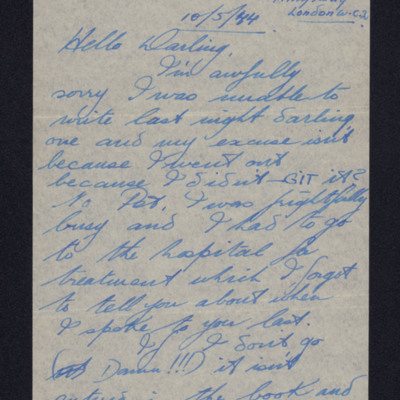 Apologises for not writing but had to go to hospital. Mentioned he had tried to ring her office but she as absent due to tonsillitis for which he offers condolence. Mentions he has not been posted yet but received lots of mail from mother and other… 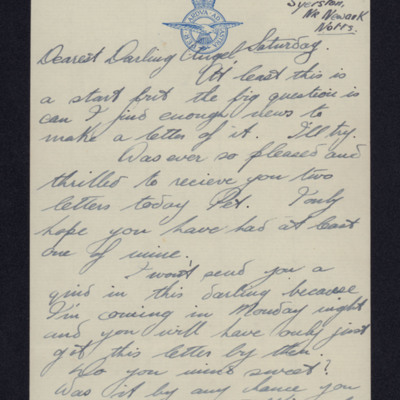 Thrilled to receive two letters from her. Continues with banter, love talk and of acquaintances. Gives her mess phone number and explains why he was unable to phone her. Writes that he has included her as 'other person to be notified' on next of kin… 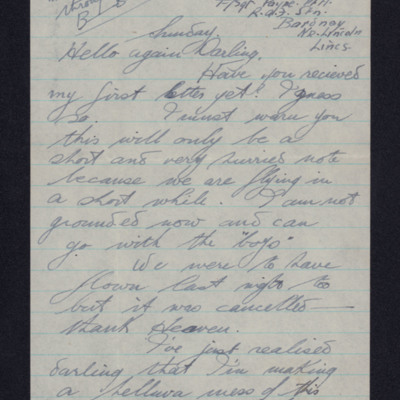 Writes this will be short letter as they are flying and he is not now grounded. Mentions flying cancelled last night and continues with general banter. Mentions going to church and that she can ring him in the mess at specific times. Glad that… 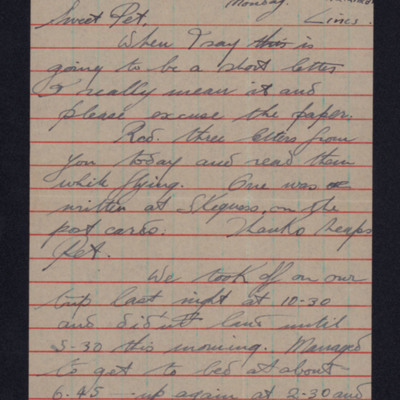 Says he received three letters from her and tells her about flying last night and that he is flying again today. Concludes with mention of abortive phone call and endearments. 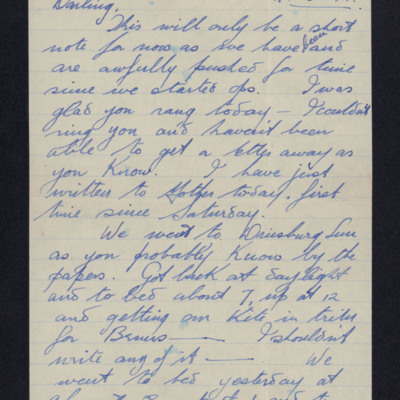 Short letter as pushed for time since started ops. Mentions going to Duisburg. Continues with banter about mates. Has one more op to do before possible seven days leave. Mentions argument they have had. Says time to ring if she wants to. 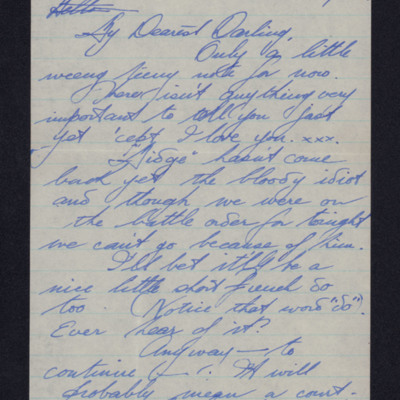 Writes about a colleague who has not returned to camp and crew removed from operation as result. Could lead to court martial. Reports arrival of 600 cigarettes and that they still do not have their own aircraft. Finished with love talk. 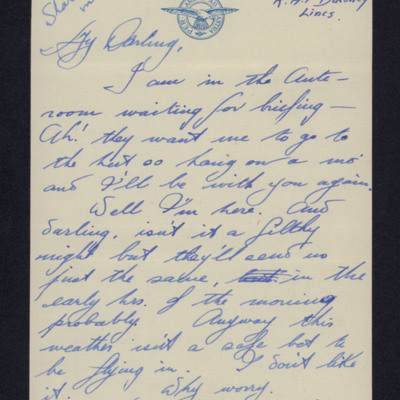 Starts by encouraging her not to worry. Complains about the weather. Mentions he went to camp cinema and that their errant colleague had returned at last but having missed an operation was likely for court martial. 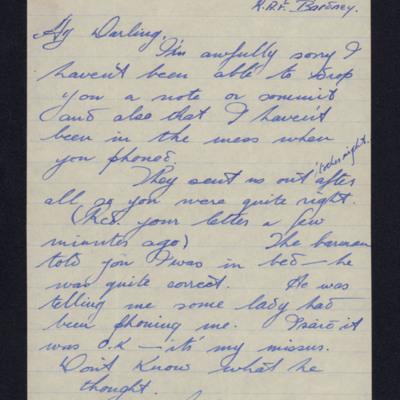 Writes that he has been unable to write or phone as has been due to fly but it had been scrubbed. Says that he went on operation to Poitiers where they lost two engines and his turret was damaged. Writes they are off on tenth operation that night. 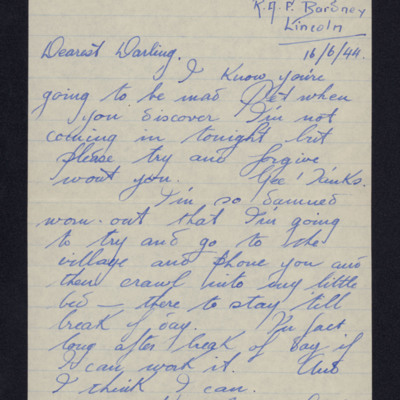 Writes he is sorry he cannot see her tonight as he is very tired. Mentions the trip last night was fairly quiet but they had been engaged by friendly anti-aircraft artillery on return. Says today is stand down. 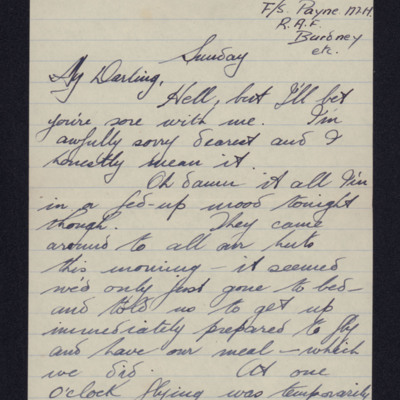 Writes with frustration over on/off operations and that on a very long operation the night before last was a murder trip when they lost 22 pals. Writes that he is not getting tired of her and he will see her a soon as he can. 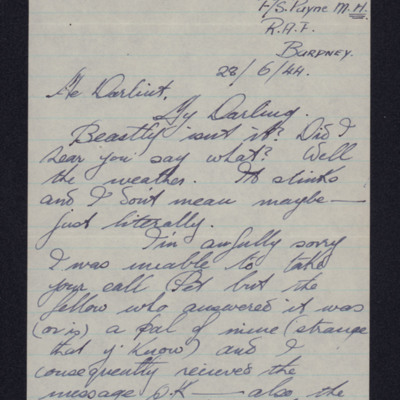 Starts by complaining about weather. Writes about possible places to stay during trip with her and states the one he would prefer and plans for his upcoming leave, including talking to her mother. Mentions that he is going to the adjutant to fill in… 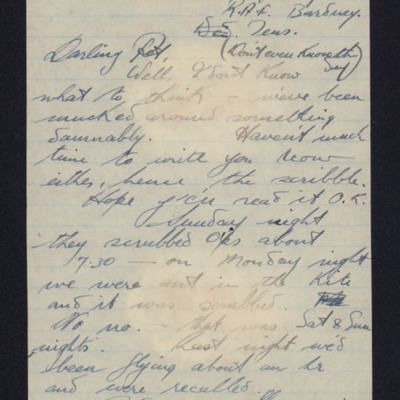 Letter from Flight Sergeant Malcolm Payne. He writes of his frustration at cancelled operations. 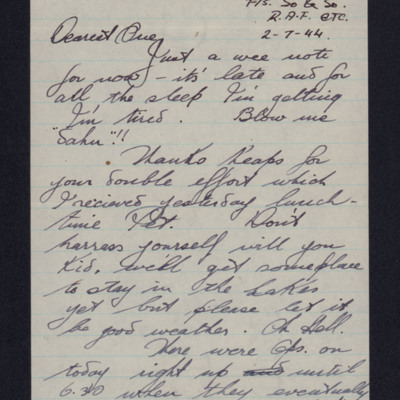 Thanks her for her letters. Today's operations were eventually scrubbed. States they are reserve crew tonight. Catches up on family news.
View all 54 items