Gunther Rall was raised in Stuttgart and enjoyed outdoor and sporting activities as a youngster and he was also a Boy Scout. He became a cadet in the army, and joined the 13th Infantry Regiment. He met a friend in the air force, and decided it was…

Under the Maple Leaf Photo Captions 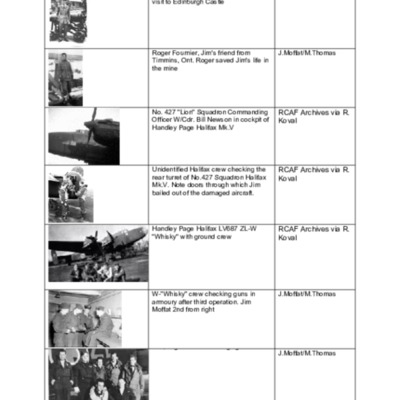 A document of 84 of the images in this collection. There is a thumbnail of the image, a caption and a credit.

A list of names of the airmen and ground crew in the squadron photograph.

Eight Air and Ground Crew and a Bomb Load 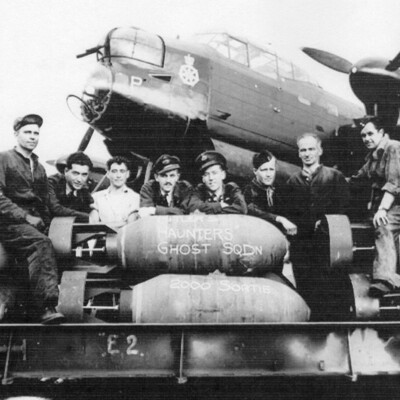 Eight airmen and ground crew posing on and behind a laden bomb trolley. Painted on the bombs is 'Hitler's Haunters Ghost Sqdn 2000 Sortie'.
Behind is a Lancaster 'P', identified in the Inventory as 'KB760 NA-P'. 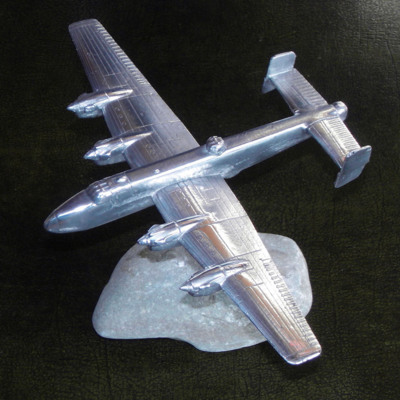 Two images of a Halifax model. It is mounted on a small stone.

Five Airmen and a Lancaster 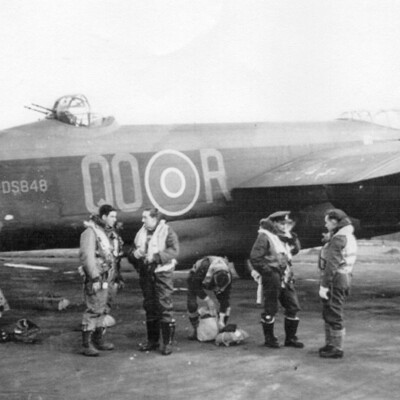 A vertical aerial photograph taken during a bombing operation. A Halifax is directly underneath heading towards a town. To the left of the town are numerous bomb explosions. Bomb craters can be see in the fields, some in lines and others in… 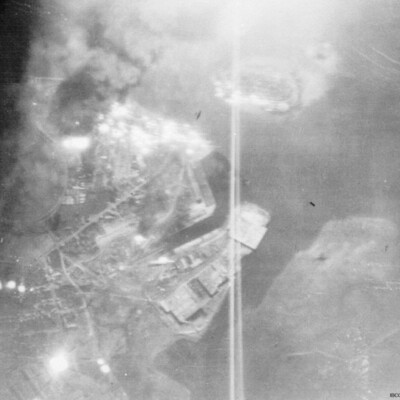 A vertical aerial photograph taken during the bombing of a dockyard. An aircraft is visible as a silhouette below. The dock is identified in the inventory as Lorient. 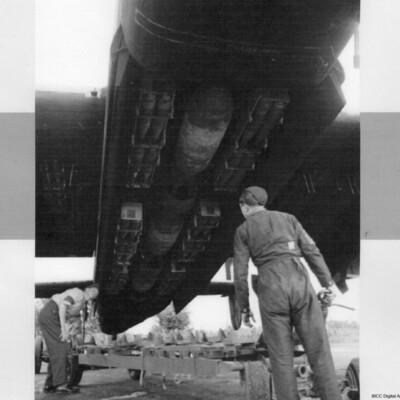 A bomb bay loaded with bombs and incendiaries.

A blessing for aircrew and ground personnel

A port side sketch of a Halifax 'I'.

A copy of the 427 Squadron Crest with 'Approved George R.I.' 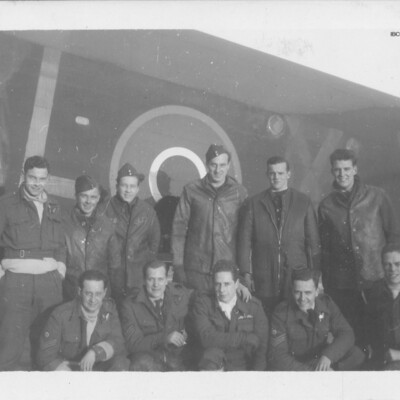 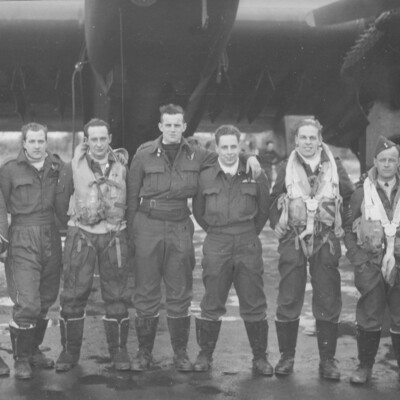 Eight airmen including Robert, dressed in flying kit, in front of their Halifax. 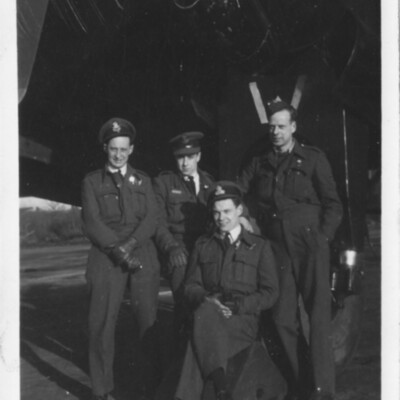 One airman sitting on the chock and three airmen standing round him. Behind is Halifax 'W'. 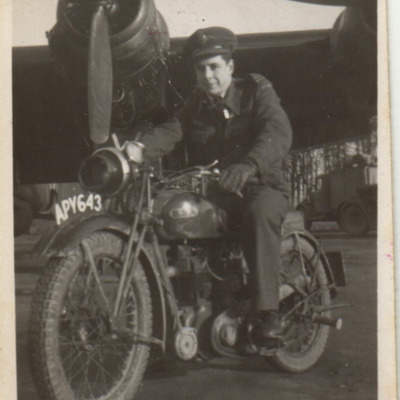 Robert is seated on a BSA motorcycle APV643 in front of a Halifax. 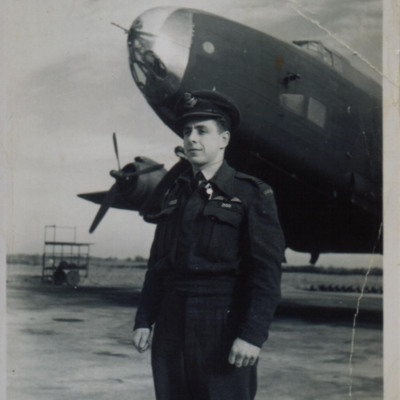 A tree-quarter length portrait of Robert standing in front of his Halifax. 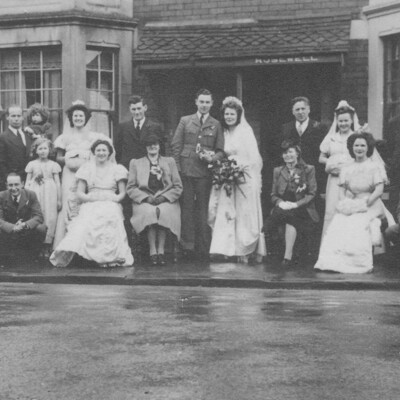 Bride, Groom and wedding party totalling 21 arranged on the pavement outside a house on Belle Vue Crescent, Cardiff. 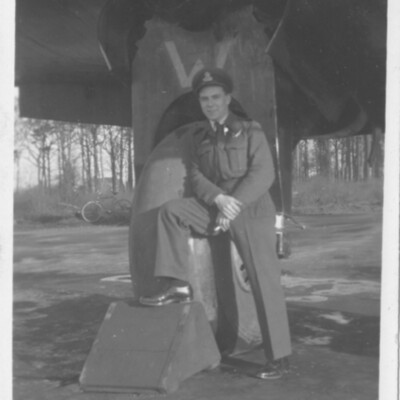 Rober Mitchell standing under the wing of Halifax 'W' with his right foot on a chock. 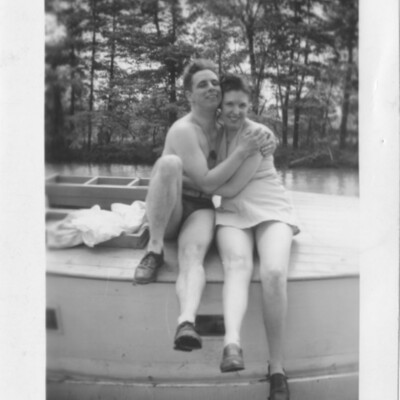 Robert has his arms round a woman identified as 'Flo'. They are sitting on a wooden boat with a river and trees behind them. 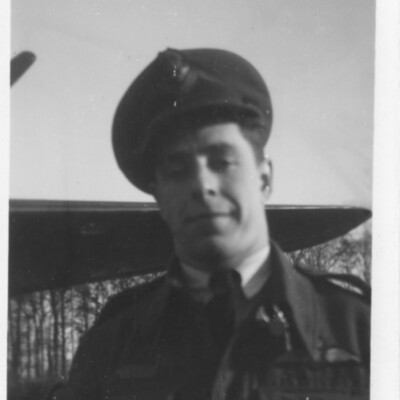 A half-length portrait of Robert Mitchell in front of a Halifax. 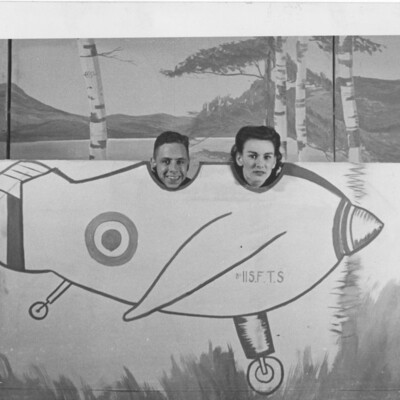 The heads of Robert and Eva in a cut out cartoon aeroplane in front of a painted lake and hills. On the aircraft is written 'No 11 S.F.T.S'. 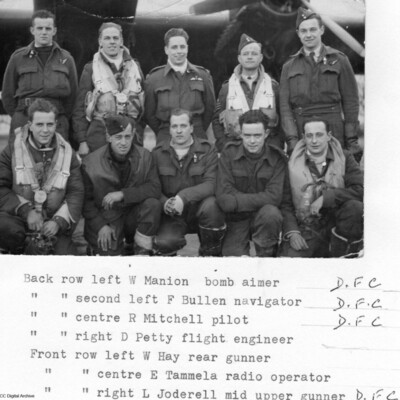 Two identical images of ten airmen in front of a Halifax. On the first there is a typewritten caption identifying the airmen but not the ground crew.
'Back row left W Manion bomb aimer D.F.C
" " second left F Bullen navigator D.F.C
…

Two Airmen and a Halifax 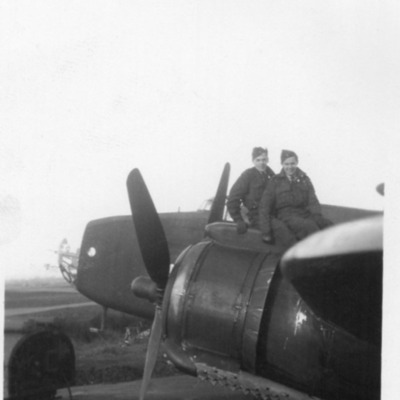 Two airmen sitting on the port outer engine of a Halifax during refuelling operations.
View all 487 items