27 items. The collection contains a scrapbook collated by Steve Puskas DFC. The 'Self' in the captions is Steve. 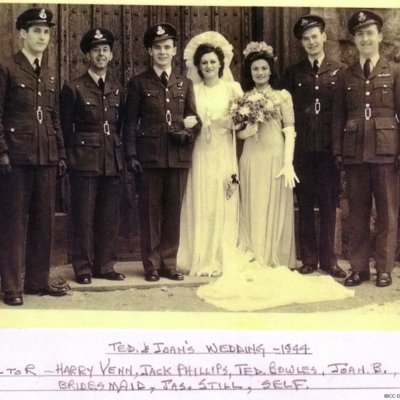 Ted and his bride standing with his bide, bridesmaid and five crewmen.
It is captioned 'Ted & Joan's Wedding - 1944
L to R - Harry Venn, Jack Phillips, Ted Bowles, Joan B, Bridesmaid, Jas Still, Self'. 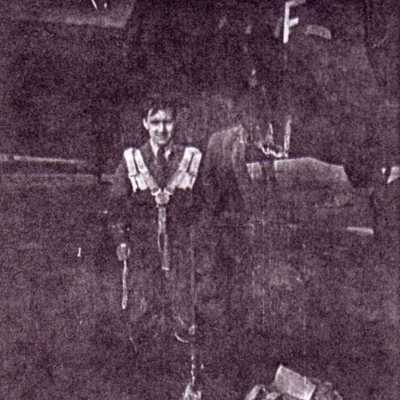 A copy of a photograph showing Steve standing at the front of a Whitley, identified by information supplied with the collection. 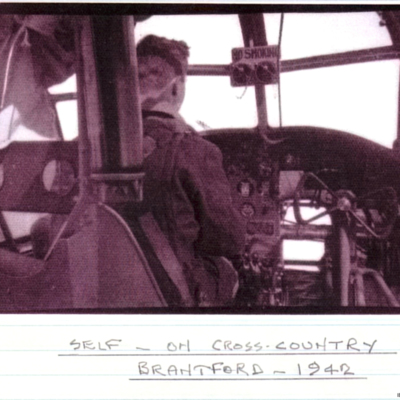 An image taken from behind of an airman flying an aircraft. Information supplied with the collection states 'Steve Puskas flying an Anson'.
It is captioned 'Self - on cross-country Brantford - 1942'. 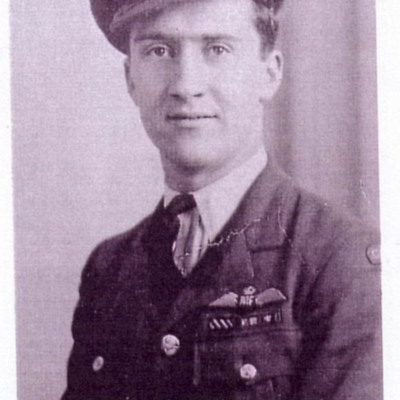 A half length portrait of Steve Puskas captioned 'Self - Fall of 1944'. 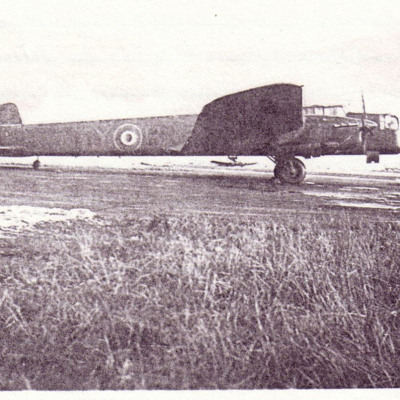 A copy of a photograph showing the starboard side of a Whitley on the ground. 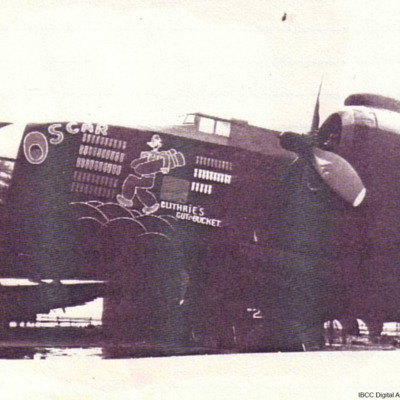 The nose art on Halifax 'O' for Oscar. A cartoon character is carrying two bombs, 75 operations are marked with bombs and in writing, 'Guthrie's Gut Bucket'

A certificate awarded to F/L RK Mitchell DFC and crew. The target is identified as 'Moss Mining', date 15/16 February 1945. Mitchell's crew is named and their is a photograph of a mine being parachuted. There are silhouettes of two stylised…

Five Airmen and their Billet 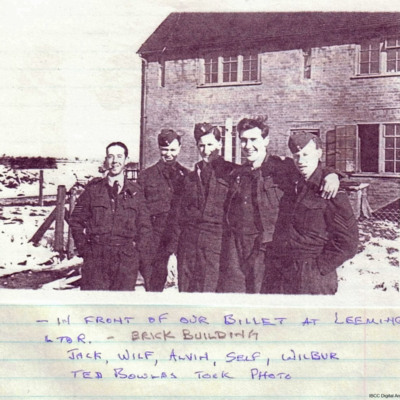 Five airmen standing outside in the snow. Behind is a brick building identified as their billet. It is captioned '- In front of our billet at Leeming L to R - Brick Building
Jack, Wilf, Alvin, Self, Wilbur Ted Bowles took photo'. 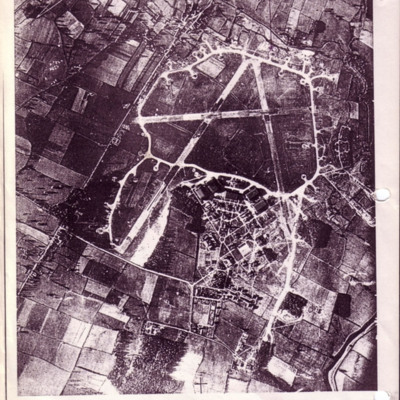 A copy of a vertical aerial photograph of Leeming with an annotation 'Dispersal for "A-Able" -429'. 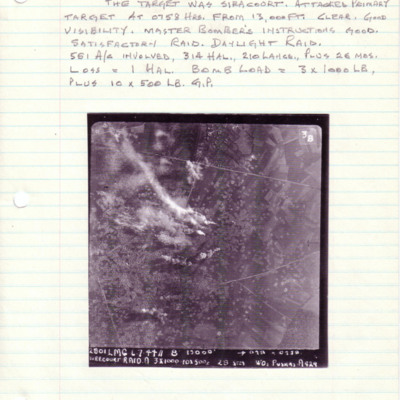 A vertical aerial photograph of Siracourt V-1 base. The entire image is filled with bomb craters. Above is a caption with details of the operation, aircraft taking part and bomb loads.
Under the image is a caption '2801 LMG 6.7.44//8" 13000' -->… 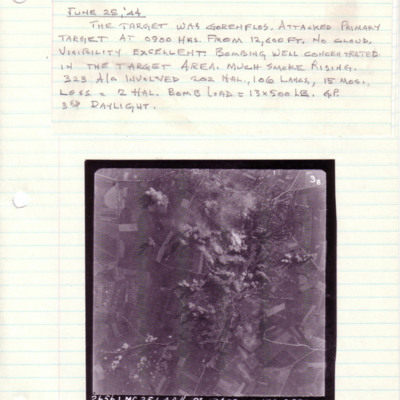 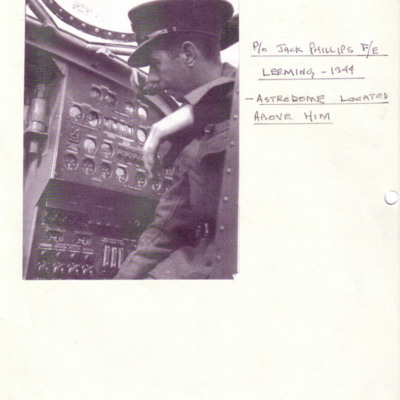 An airman inside an aircraft. It is captioned 'P/O Jack Phillips F/E Leeming - 1944 -Astrodome located above him'. 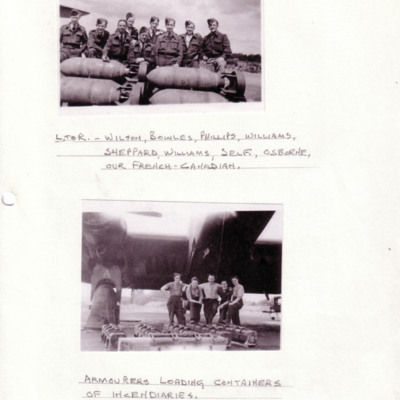 Two photographs of bombs being loaded.
In photo 1 there are nine airmen behind a trolley of bombs. It is captioned 'L to R, - Wilson, Bowles, Phillips, Williams, Sheppard, Williams, Self, Osborne, our French Canadian.'
In photo 2 are five armourers… 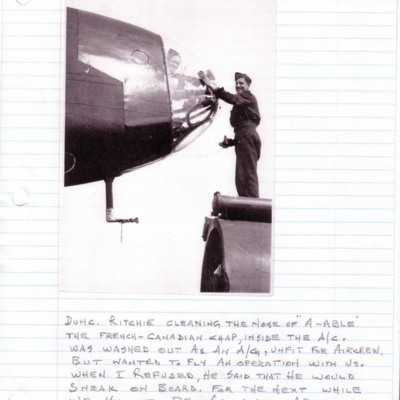 The nose glass of a Halifax being cleaned by Dunc Ritchie. He is standing on top of a fuel bowser.
Underneath is a caption explaining that inside the Halifax 'A' is an air gunner who was washed out but was desperate to fly. 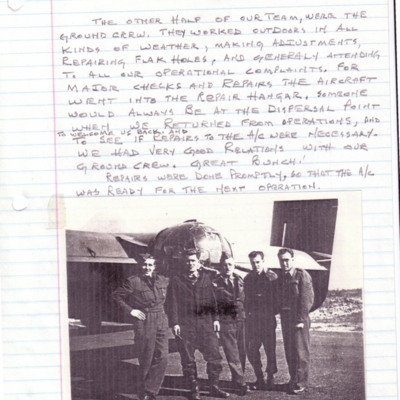 Five ground personnel at the tail of a Halifax, It is captioned with an explanation about what ground crew do and their names 'L to R, - H. Osborne, Watson, Sheppard, Rod Williams, Crew Chielf Fl/Sgt J. Ollivier'.
Above Ollivier's name is signed… 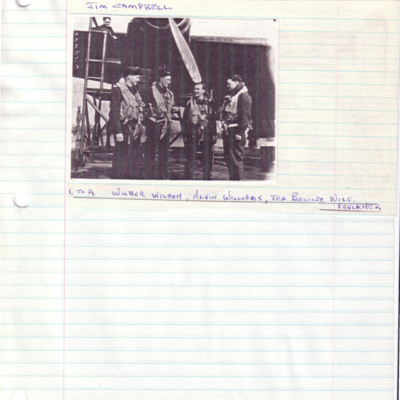 Four airmen wearing flying kit standing in front of their aircraft and one on top of the wing. The caption reads 'Jim Campbell' and 'L to R Wilbur Wilson, Alvin Williams, Red Bowles, Wilf Faulkner'.

Jas, Self, Jack, Wilf, Ted and their Aircraft 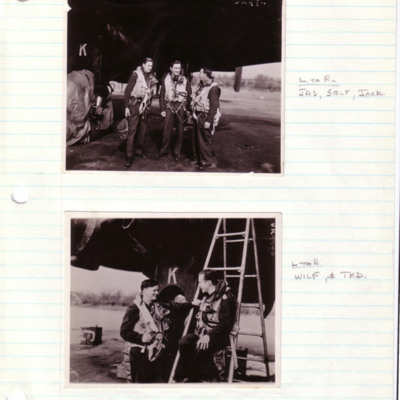 Alvin, Ted and Jack with their Halifax 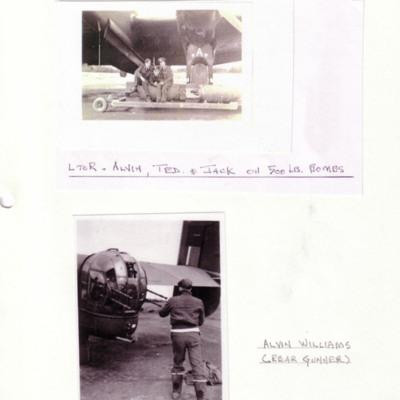 Two copied images.
The first has three men sitting on a bomb trolley under the port side of a Halifax. It is captioned 'L to R - Alvin, Ted & Jack on 500lb bombs'.
The second image is an airman at the rear gun turret. It is captioned 'Alvin… 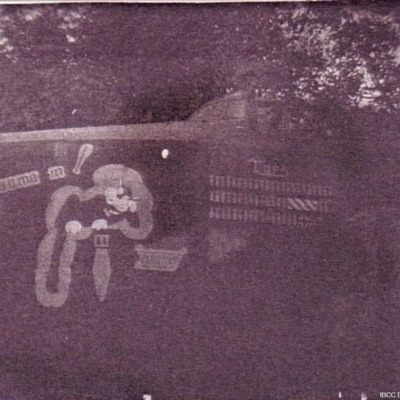 Halifax nose with 'Get Some In!' painted. There is an unclear cartoon cat dropping a bomb. Over 60 operations are marked. 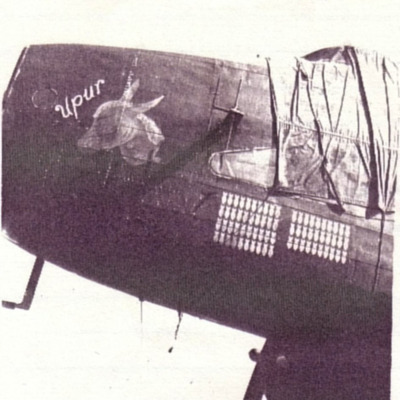 The nose of a Halifax with 70 operations marked and a painting marked 'Upur'. 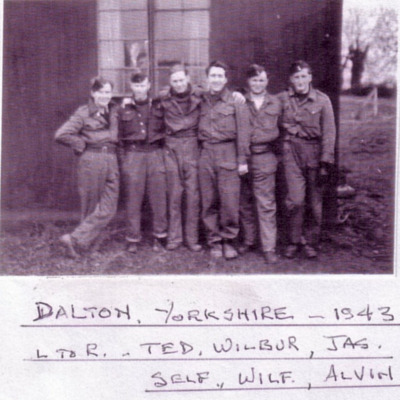 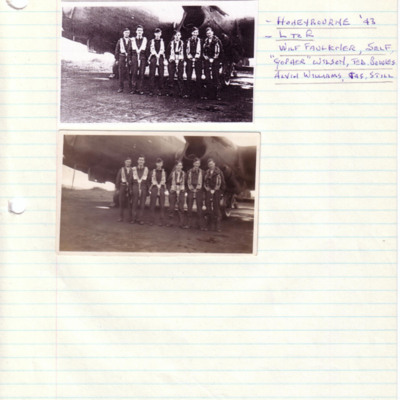 Two images, the top being a copy of the lower one. Six airmen standing at the front of a Whitley. It is captioned
'- Honeybourne '43
- L to R
Wilf Faulkner, Self
"Gopher" Wilson , Ted [missing]
Alvin Williams, Jas, [missing]' 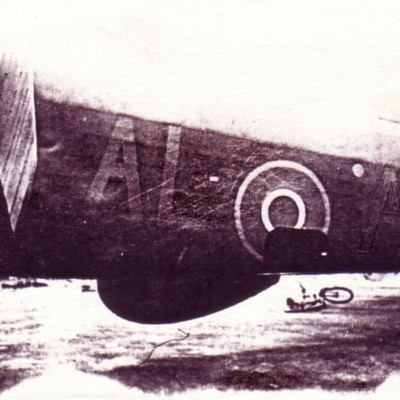 A port side view of a Halifax showing the squadron code 'AL-A' and registration 'MZ282'. 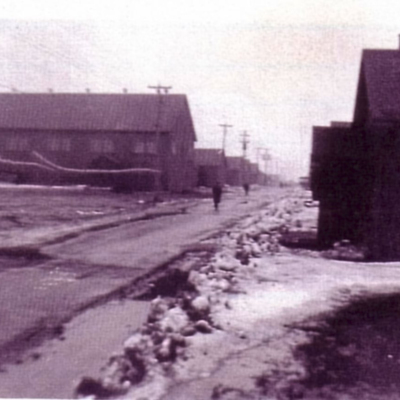 A row of huts described as 'Brantford Billets'. There is a little snow on the ground with evidence of thawing. An oblique view of Brantford aerodrome captioned 'No 5 SFTS Brantford -1942'. The ground is snow covered.
View all 27 items