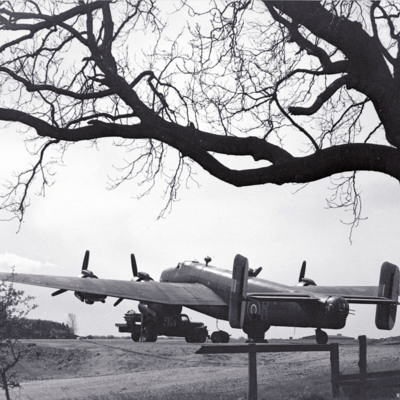 A Halifax 'R' on the ground, seen from the rear and port side. The photographer has framed the image with a bush and a tree.
A trolley accumulator and a lorry carrying oxygen cylinders are in front of the aircraft. 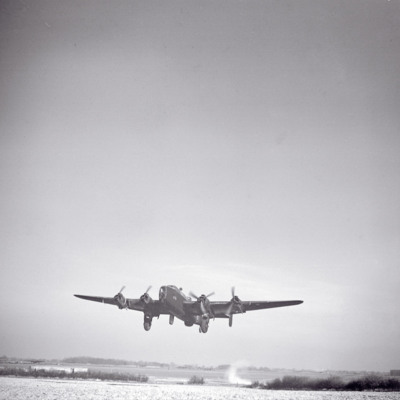 A Halifax landing on a snowy airfield, seen from the front/port. The aircraft's propwash or slipstream has picked up a swirl of snow. 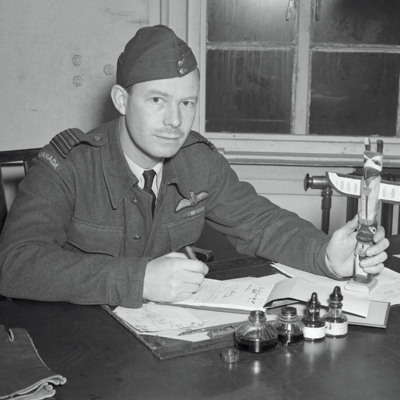 A pilot is sitting at his desk doing paperwork. In his right hand is a pen and in his left a model native American totem pole, the symbol of 426 Sqn "Thunderbird" Squadron.

Two Airmen and a Halifax 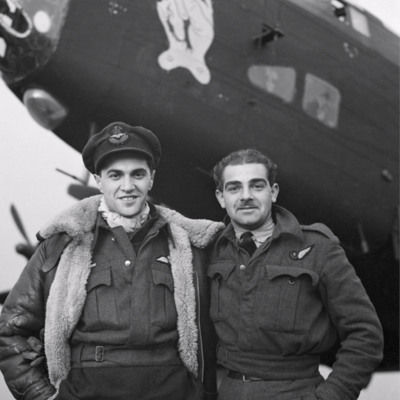 A pilot and an engineer standing at the front of a Halifax. On the nose is painted a hand with its index finger raised pointing at the sky. 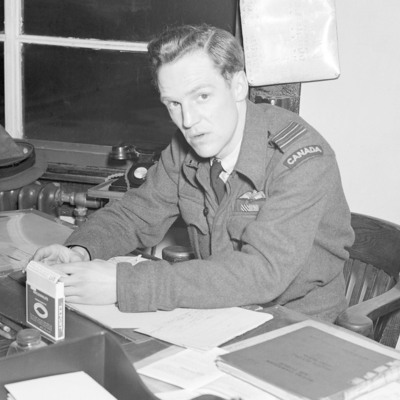 A pilot wearing a DFC ribbon is seated at a desk working on paperwork. A log book and packet of cigarettes are on the desk.

Seven Airmen and a Lancaster 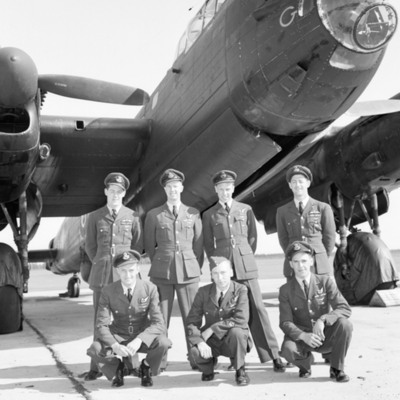 Seven airmen arranged in two rows at the front of a Lancaster 'G'. 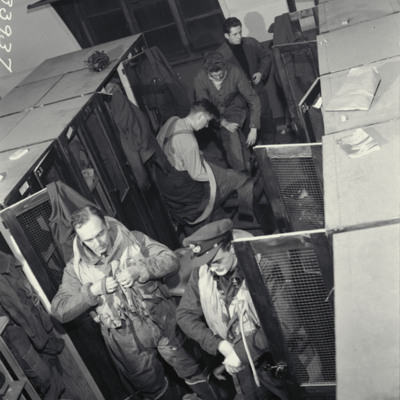 Five airmen in a locker room putting their kit on. It is annotated 'PL33937'. 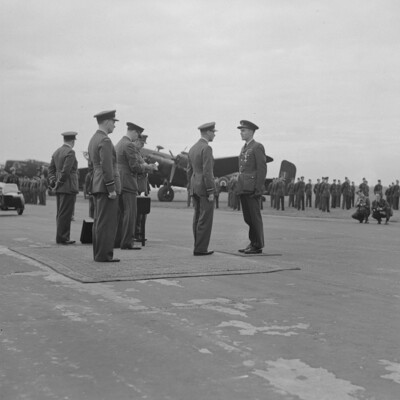 Two images of airmen on parade. The king and a group of officers are presenting awards to airmen. Behind are Lancaster Mk 2s and Halifaxes.
The second image is annotated 'PL-31688'.

Two Airmen and a Lancaster 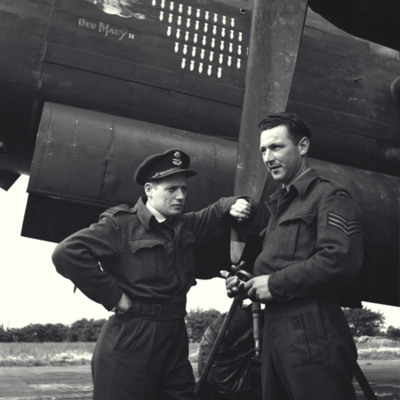 Two airmen standing at the front of a Lancaster. One man is leaning on the propeller, the second has a hand-drill in his hand. On the nose of the Lancaster is painted a flying duck, 'Our Mary II' and 45 operation bombs. 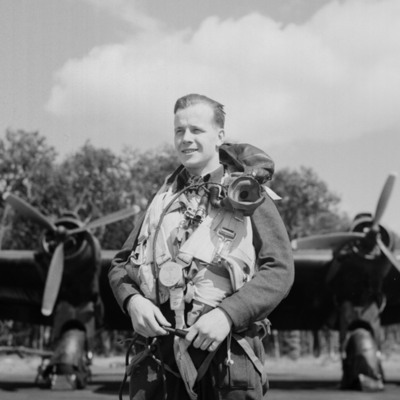 A three quarter length portrait of an airman wearing his flying kit. Behind is a radial engined Halifax. 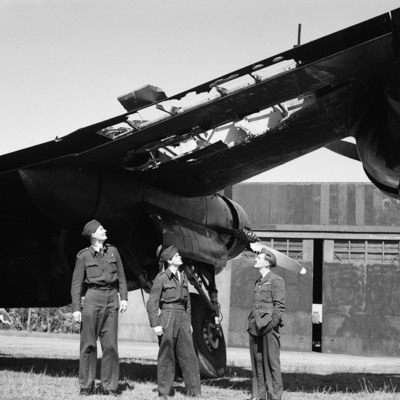 Three airmen standing under the damaged section of the starboard wing of a Lancaster Mk 2. A pilot is standing with his hands in his pockets. 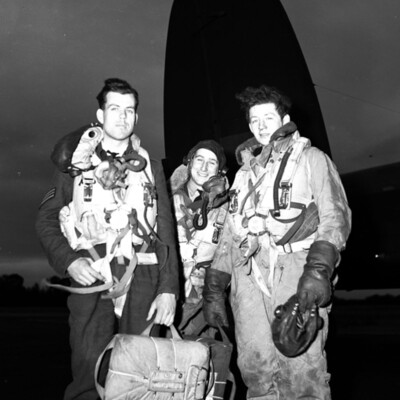 Three airmen wearing their flying kit, standing at the tail of a Lancaster. 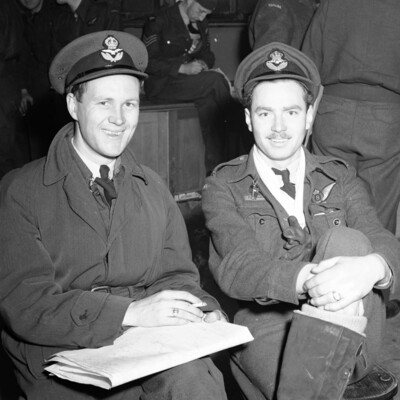 Two seated airmen. One, a bomb aimer, is wearing boots, the other has paperwork and a cigarette. 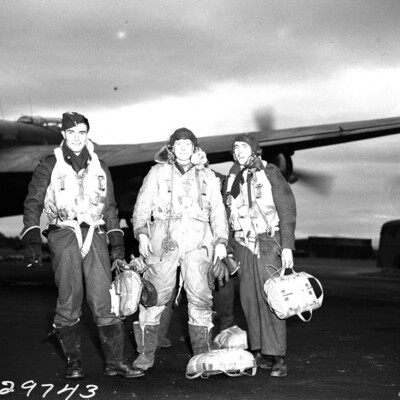 The three airmen are wearing their flying kit and carrying parachutes. Behind a Lancaster has its engines running . It is annotated 'PL29743'. 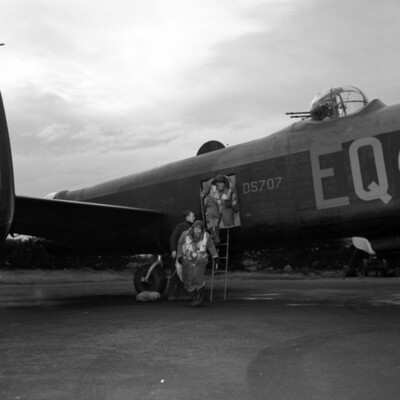 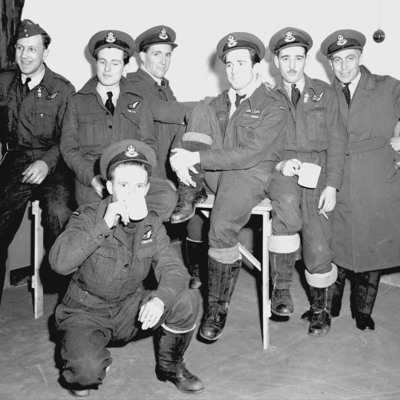 Seven airmen positioned on and around a table in a hut. 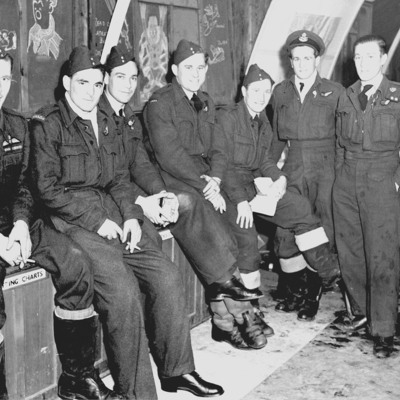 Seven airmen sitting in a Nissen hut. The walls behind have been decorated with paintings or chalk drawings. Two WAAFs are working in the background. 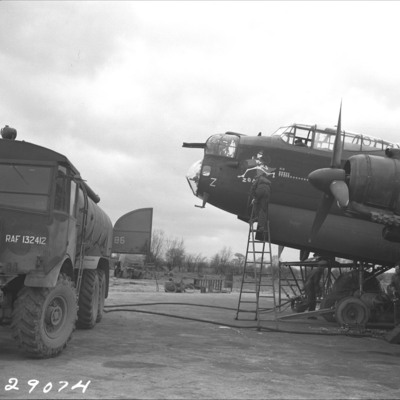 Lancaster Mk 2 'Z' being refuelled. A ground crew airman is up a ladder partly obscuring the nose art, a cartoon of a running skeleton with 'Zombie'. It is annotated 'PL29074'. 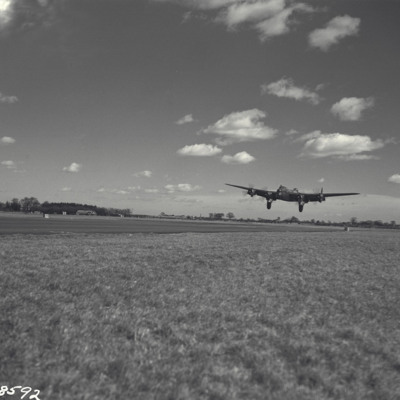 A Lancaster landing, seen from the front. It is annotated 'PL28592'.

Five Ground Crew and a Lancaster 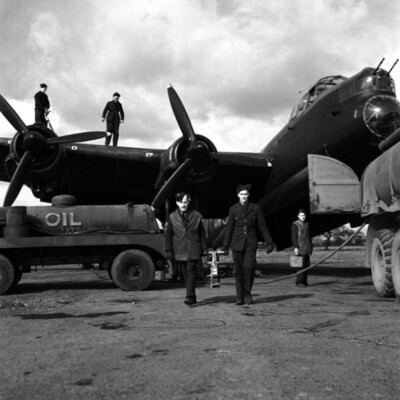 Five ground crew at work on a Lancaster Mk 2. Two are on the wings refuelling. There is an oil bowser and petrol bowser in the foreground.

Eight Airman and a Lancaster 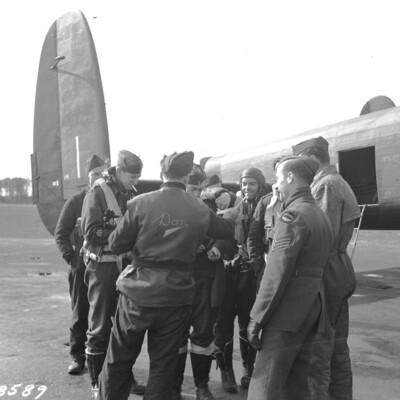 A crew of seven airman and a ground crew man with 'Don' painted on the back of his leather jerkin. They are standing towards the rear of Lancaster 'DS830'. 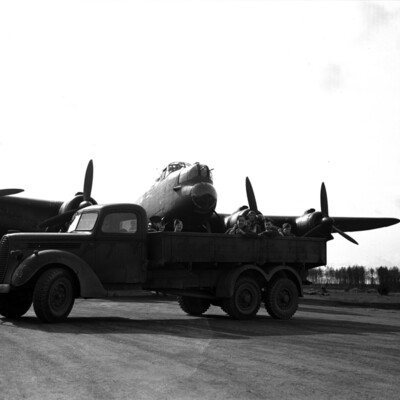 A Lancaster seen from the front. In front is a RAF Fordson Sussex 3 ton crew lorry with seven airmen.

Two Airmen and a Lancaster 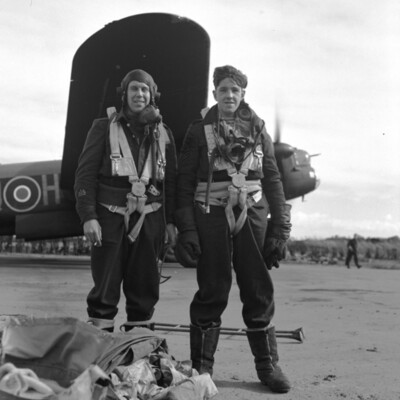 Two airmen in flying kit standing at the front of a Lancaster. it is annotated 'PL28587'. 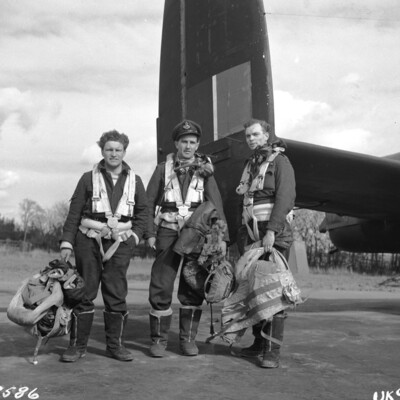 Three airmen with their flying kit standing at the tail of a Lancaster. They are carrying their Mae Wests and parachutes. It is annotated 'PL28586' and 'UK9214'.

Five Airmen and a Lancaster 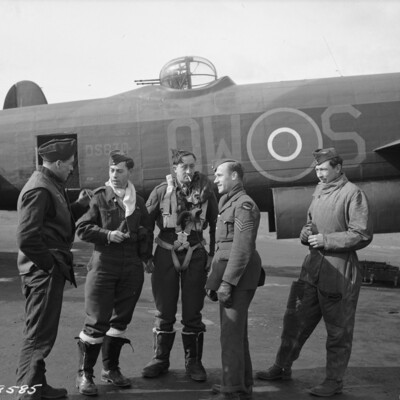