Ninety-six items and a sub-collection with twenty two items..
The collection concerns Flight Sergeant Pat Hogan (436464 Royal Australian Air Force) and contains letters home to his family, his flying log book, accounts of his aircraft being shot down and him baling out, official documents, certificates and photographs.
He flew operations as a navigator with 466 Squadron.

The collection has been donated to the IBCC Digital Archive by Elizabeth Anne Lusby and catalogued by Nigel Huckins. 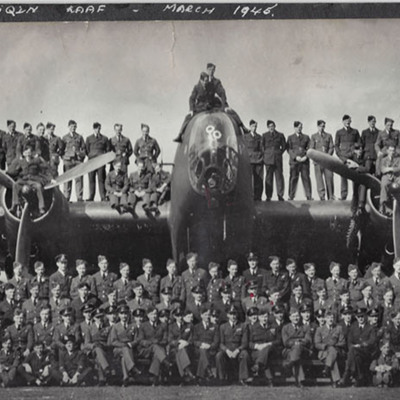 A very large group of airmen sitting and standing in four rows in front of a Halifax and others lined up sitting on wings, engines and fuselage. Submitted with caption 'RAAF 466 Sqn March 1945 (Personal Photo Album)'. 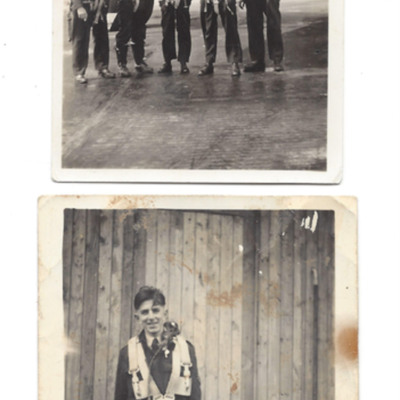 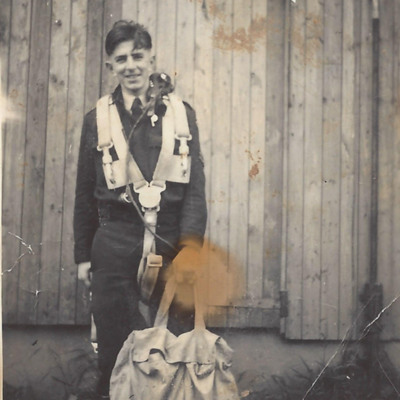 An airman wearing battledress and parachute harness holding canvas bag standing in front of wooden wall. Submitted with caption 'Pat in training'. On the reverse 'taken in Scotland some time ago just prior to a flip. For once the run is apparently … 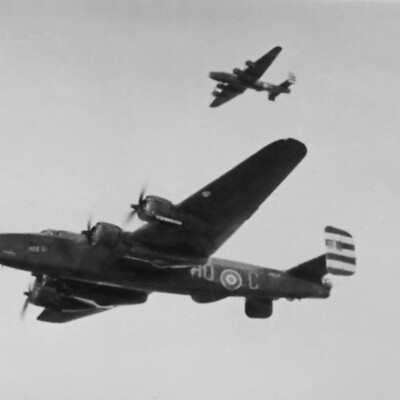 Air-to air view front quarter from below of two Halifax, the nearer with letters 'HD-C' and the other above. Submitted with caption 'NR179 HD-C Returning Circa 1945 (AWM)' 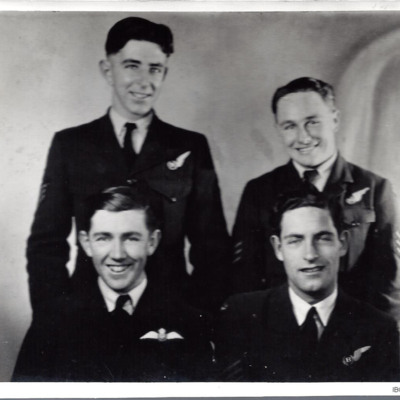 Four airmen all wearing tunics with brevet, a pilot and bomb aimer in front and navigator and flight engineer at the rear. Submitted with caption 'NR179 466 Sqn close friends'. On the reverse 'RAAF 466 Sqn crew NR179, standing (left to right),F/Sgt… 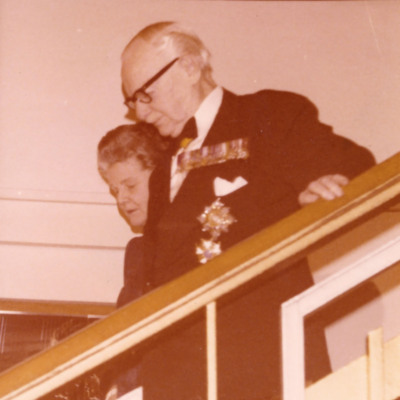 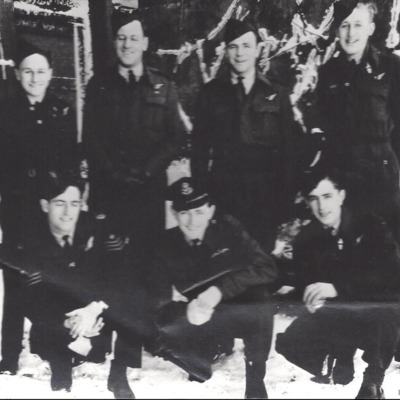 Seven men, four standing behind and three squatting in front. All wear battledress with half brevet and side caps except centre front who has pilot's brevet and peaked cap. They are standing in snow with a building in the background.
Submitted with… 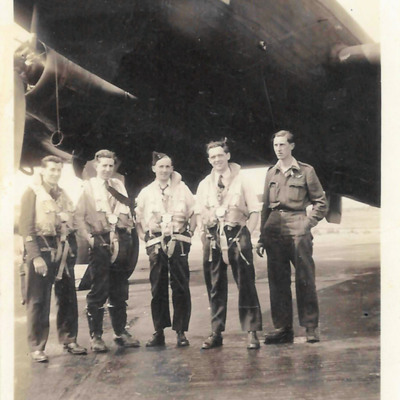 Two versions of the same image of five airmen standing in line. The four to the left wear parachute harnesses and the man on the right wears battledress with half brevet. In the background part of a Halifax. Second image has caption 'P J Hogan 2nd… 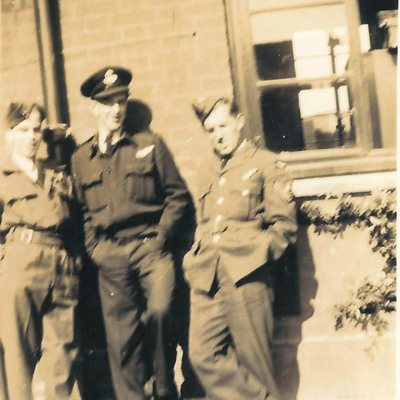 Three men standing leaning against a brick building all with hands in pockets. Man on the left wears battledress and side cap. An officer in the centre wearing battledress with half brevet and peaked cap. Sergeant on the right wears tunic with half… 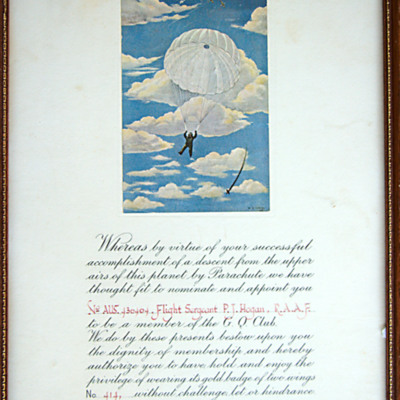 A certificate from G. Q. parachute company appointing Flight Sergeant P J Hogan RAAF to be a member of the G Q Club. At top colour artwork showing a man on parachute against blue sky with white clouds. 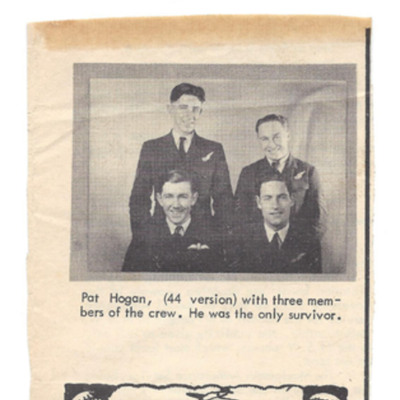 Top - caterpillar club card made out to Flight Sergeant P Hogan.
Middle - b/w photograph of four aircrew, two in front two behind. Bottom left man has pilot's brevet and the others half brevet. Captioned 'Pat Hogan (44 version) with three members of… Writes a little of recent activities and discusses state of parcels on arrival. Writes about fatalism of aircrew and then goes on to describe recent leave in Sussex and Edinburgh and other parts of Scotland then finishing in Sheffield. Catches up with recent mail. Says not to worry about life insurance and catches up with her news and other gossip of doings. Concludes with cricket commentary. 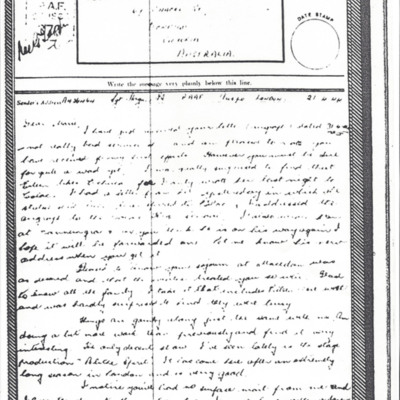 Says that things are going along fine but doing a bit more work and finds it interesting. Mentions seeing 'Blythe Spirit' and comments on surface mail. Poor photocopy cannot with start too faint to read. 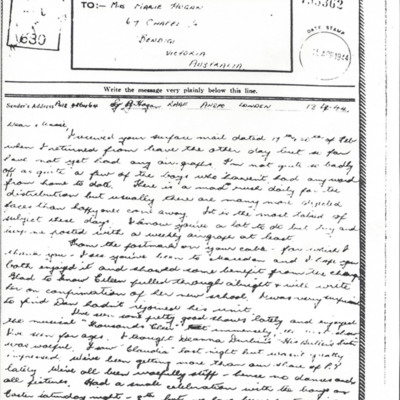 Catches up with recent mail and mentions that many colleagues have not had much mail. Catches up on her activities at home and mentions shows he had seen. Says he had a small celebration recently. 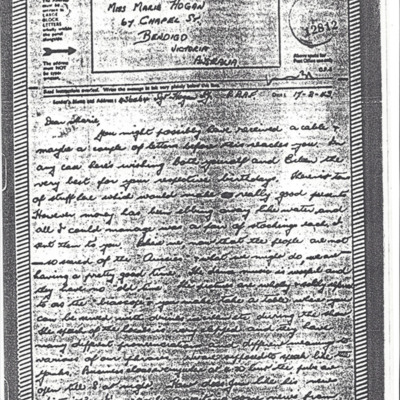 Sends birthday wished to her and Eileen and says he could not afford much of presents. Describes a little of his his current situation and provides some gossip, 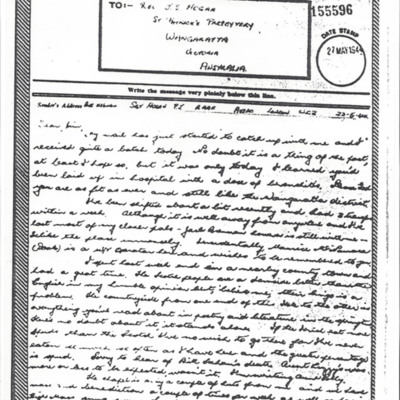 Writes that mail has caught up with him. Mentions Jim had been in hospital. Says he had been shifted about and describes activities on recent weekend in local town. Mentions chapel is only a few huts away from his and they have mass a couple of time… 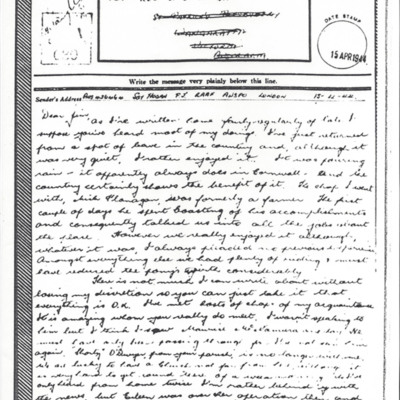 Writes that he had just returned from leave in Cornwall of which he gives some details. Says not much he can write about but he had met many chaps of his acquaintance who he mentions. 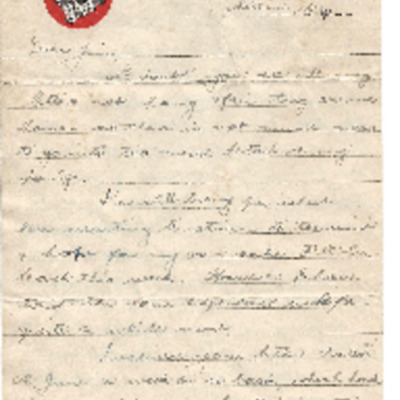 Writes he is still waiting to return to unit. Catches up with mail to and from and writes of religious matters. Asks about father's health and continues with more religious discussion. Explains about camp and camp hospitals with explanation of how… 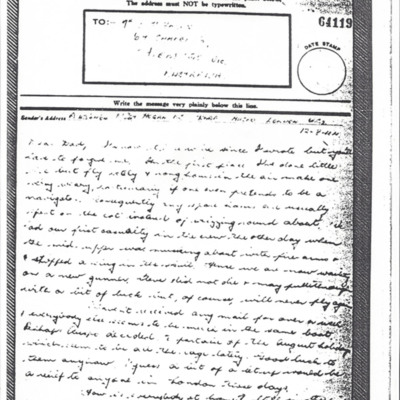 Apologises for not writing recently but he had done little but fly. Tells story about crewmember. Mentions not receiving mail for a week and other gossip. 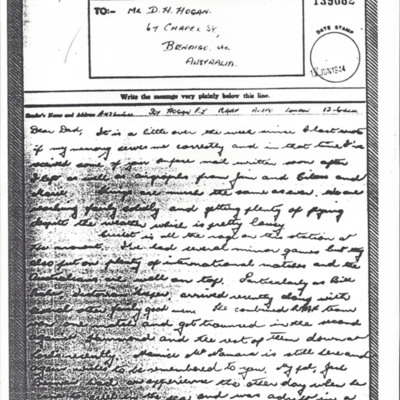 Writes about mail received and sent. Getting plenty of flying despite weather. Mentions that cricket is the rage on the station and has had a few games including international with the Australians on top. Catches up with other gossip. 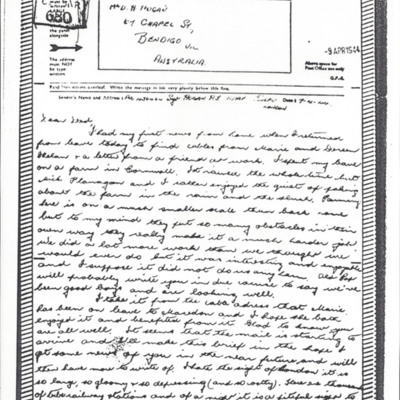 Reports on arrival of mail from home. Mention spending leave on a farm in Cornwall. Catches up on news from home. Writes that he hates the sight of London and describes why. 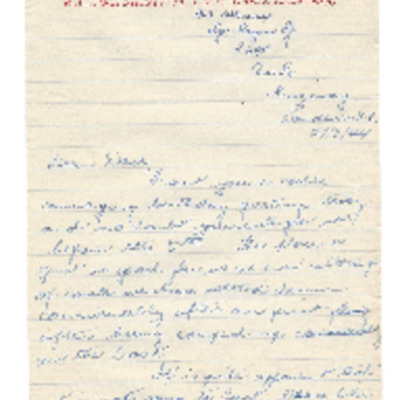 Writes that he sent a birthday cable and says a little about his current situation, that he was getting leave and had applied for a country place in Devon or Cornwall. Mentions types of mail and arrival times. Describes a day out in the country and a… 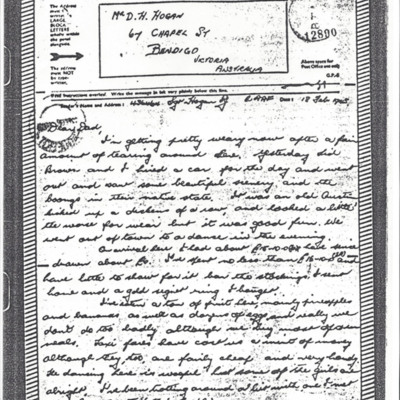 Writes of recent activities and his finances. Mentions that he had been eating a lot of fruit and that food was not too bad. Comments that he had spent a lot on taxis but they were handy but the dancing was woeful but some of the girls were OK. 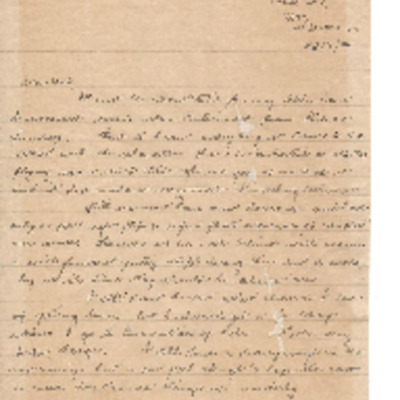 Catches up with family news and mail as well as mentioning a little about his course and the chance of getting leave. Continues with general gossip.
View all 118 items