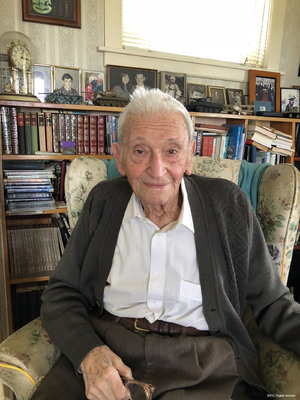 Ian Petrie found himself struggling to find employment in recession hit New Zealand when he saw the advertisement to fly with the RNZAF. He couldn’t contemplate the thrill of flight at a time when opportunity for such travel was rare. He was unsuccessful in his attempt to become a pilot and went absent without leave out of disappointment. He eventually rejoined the training programme and was posted to the UK. He was very aware of the casualty rates and the fact he survived purely by luck. On his last operation it was his aircraft that took the line overlap photos. He went to the hut the next morning where the photos were displayed and took his own as mementoes just before they were all destroyed.